de Blasio blamed an “atmosphere of hate has been developing in this country over the last few years.” 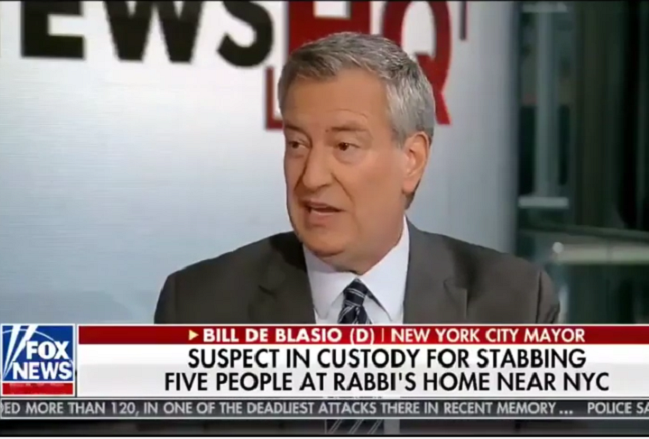 Readers of LI are well aware that anti-Semitism has been on the rise in the U.S. and across Europe for many years.  It seems that the media and politicians are starting to figure it out, too.

As is so often the case, however, they are focused very narrowly on the recent spate of attacks in and around New York City and fail to see the forest for the trees.

An example of this occurred this weekend when New York City mayor Bill de Blasio appeared on Fox News and blamed an “atmosphere of hate has been developing in this country over the last few years.” He went on to note, quite rightly, that a “lot of it is emanating from Washington and it’s having an effect on all of us.”

I doubt, however, that de Blasio means that the “atmosphere of hate” he sees “emanating from Washington” includes Democrats.  Back in June, he infamously called anti-Semitism a “right-wing movement.”

New York City Mayor Bill de Blasio (D) on Tuesday dismissed the suggestion that the left has played any role in the rise of anti-Semitism, calling the issue a distinctly “right-wing movement.”

“I think the ideological movement that is anti-Semitic is the right-wing movement,” the 2020 presidential candidate said during a press conference about the rise in hate crimes in the city, according to the New York Post.

“I want to be very, very clear, the violent threat, the threat that is ideological, is very much from the right,” he added.

De Blasio also rejected the notion that there has been any rising anti-Semitism on the left with regard to the boycott, divestment and sanctions movement known as BDS, according to the newspaper.

Appearing on Fox News, however, de Blasio toned down the rhetoric and attempted to appear less partisan.

New York City Mayor Bill de Blasio blames an “atmosphere of hate” for the recent increase in anti-Semitic attacks in his city and the surrounding areas, but in a Fox News interview, he passed at least some of the blame to the nation’s capital.

De Blasio spoke about the ongoing problem the day after five people were stabbed at a rabbi’s house in nearby Rockland County during a Hanukkah celebration, and at least eight incidents took place in Brooklyn earlier this month.

“We are in a crisis right now,” de Blasio said Sunday afternoon, adding, “What we’re seeing is a growth of anti-Semitism in this country that is profoundly dangerous. It is happening in Europe as well.”

When it comes to his city, however, de Blasio has taken criticism from those who believe he is not doing enough to prevent the violence, or properly recognizing the problem. He was blasted by conservatives earlier this year when he claimed that anti-Semitism was a right-wing threat – even as members of his party such as Reps. Rashida Tlaib, D-Mich., and Ilhan Omar, D-Minn., have been hit with accusations of anti-Semitism over their past remarks.

. . . . The mayor then shifted, appearing to lay blame at the feet of President Trump’s Republican administration.

“An atmosphere of hate has been developing in this country over the last few years. A lot of it is emanating from Washington and it’s having an effect on all of us,” he said.

When asked if he was blaming Trump, he said, “not just the president,” but said “we need a different tone, starting in Washington … that encourage this country to actually find some unity and some common ground” that he does not think the country has had in recent years.

Amazing how a Democrat takes responsibility for nothing.

De Blah is not just a Democrat. Even among Democrats he’s special.

De Blasio is an out-and-out Commie.

Don’t despair, they are still useful as a bad example

The myth the left have tried to create that Trump is racist, antisemitic, and homophobic is just bizarre. There are many uncomplimentary things that one can justly call Trump; even his fans admit he’s far from perfect. But these are just not among them. Calling him those things is like calling him short, or black, or humble; things that he is manifestly not. All it does is discredit whatever else the person calling him those things has to say, since he’s obviously out of touch with reality.

“even his fans admit he’s far from perfect”, but less imperfect than the majority of politicians. Just because a politician maintains a near perfect facade does not mean the are.

Not so bizarre. It is hitler’s ‘big lie’ theory in action. Works, too.

The only significant political group in the country whose members wallow in hate is the “progressive” left. Unfortunately they include the previous President, the current House speaker and majority and the larger part of the media. Those in the conservative and libertarian movements may think that the “progressives” are idiots trying to get us all killed, but we don’t hate them. We hate their ideas. Since their identities are based on their ideology, they just think we hate them. Pathetic, but true.

‘I doubt, however, that de Blasio means that the “atmosphere of hate” he sees “emanating from Washington” includes Democrats.’

Perhaps I have not been paying very close attention, but I think ALL of the hate is from Democrats. What are the examples from Republicans?

“Perhaps I have not been paying very close attention, but I think ALL of the hate is from Democrats. What are the examples from Republicans?”

We don’t want illegal aliens to invade our country so we obviously hate foreigners.

We want to arm and defend ourselves against criminals, and punish criminal acts, so we obviously hate blacks.

We don’t want our elections compromised by voter fraud so we obviously hate the poor and minorities.

We don’t want our history besmirched and destroyed so we obviously hate the “woke” college kids who demand it.

We want the best interests of our country to come first with regard to our political leadership, so we obviously hate the rest of the world.

We want scientists to actually provide evidence (rather than busted computer models and assumptions about bad weather) that their doomsday predictions are accurate before committing to destroying our economy and way of life, so we obviously hate science.

We’re nothing but haters, so it makes perfect sense for them to hate us right back, endorse and commit violence against us and blame us for all the ills of the world, doesn’t it?

Of course. It should have been obvious to me! Good summary. My “not woke” = blindness I guess.

Projection. They hate with a fierce burning fire, but they don’t see it; instead they see us as hating.

de Blasio is doing what Democrats do: Create a problem and then exploit it for political gain by blaming Trump/white supremacists/Republicans/suburbanites/cops/Climate Change/etc. The left has been setting up this violence against Jews for many years.

Many people on the left and in the media blamed a supposed conservative “atmosphere of hate” in Dallas for Kennedy’s assassination.

I can’t find the quote, but I remember reading Jackie Kennedy’s blunt take on the cause of her husband’s assassination given to a friend in private. As best I can remember it was something like, “In the end it was just a little communist loser.”

It’s the same old refrain. “never let a crisis go to waste.”
The problem is in the modern times it is too easy to pull up highlights of the politicians actually promoting anti-semitism.

So this year let us have fun with the Democratic National Committee.
Let us all search for videos of the candidates promoting anti semitic and anti- Israel positions. Spread them throughout social media highlighting the party of hates hypocrisy. Maybe some enterprising campaign volunteer can compile them for a fantastic infomercial.

He’s correct of course. Were it not for Trump’s policies he would have forcibly driven every last Jew out of NYC by now.

Another attempt to reply getting the thumbs down instead! That is the only shortcoming to LI.

As Trump elevates the Left must denigrate. Can’t have Jews getting good press and sympathy ….can’t have Israel bring its capital back to Jerusalem.

This site does need to reconfigure its mobile version to make the upvote, downvote, and reply links more touch-friendly. Moving them farther apart and giving each bigger screenspace would be a huge help.

The mobile version could also stand to be less resource-intensive. Sometimes it takes so long for the site to finish loading that I give up and close the tab, figuring I’ll just have a look when I’m back at my PC.

When I see hate expressed in this country, it’s at President Trump and his supporters, not by them.

So Trump — by supporting Jews and Israel – influences Democrats to be Anti-Semitic, support BDS, and assault Jews?

They have to do the opposite of everything Trump does. They can
‘t help themselves because #OrangeManBad

In a leftist city, in a leftist state, with a mostly leftist government due the past 50 years.

This is why we have an Electoral College. It’s tough to be a conservative voter in a blue state. (Especially in New York State!!) Our presidential votes don’t count. We depend on the more rational red states to do the right thing.

The best word available to describe this guy: LOSER.

Bill de Blasio is the jelly to my burger,
the knife to my soup, the glitter to my sushi,
the ketchup to my ice cream. jpegs to Helen Keller.

de Blasio has to be the most disingenuous person in America. The tripe emanating from him is most vile heard in decades. No worries though, the dinosaur media, a wholly owned subsidiary of the Democrat party, will cover for him.

Bill de Blasio is either a liar or the mose detached person on the face of the planet.

He actually ran for POTUS. No joke.

Given The Squad’s open anti-Semiticism and the increasing academic hatred of all things Jewish, I find de Blasio to be a dangerous charlatan.

There goes De Blasio trying to cover for his own antisemitism

Honestly that is what everyone will think of De Blasio for making these blatantly bigoted cracks.

If De Blasio makes such FAKE comments thne De Blasio must be self-projecting his own Racism. No?

Each day, de blasio should be handcuffed to the front door of a different synagogue, with a target on his chest.

notamemberofanyorganizedpolicital in reply to TheFineReport.com. | December 30, 2019 at 4:45 pm

Maybe we should do that the Brennan and this FIB agent?

Can’t wait till De Blasio starts catching some of this.

Hard to beleive what is happening in our lifetimes. But we’d better act now, before it is too late.

Call out the likes of michelle obama for her (his?) racism, as well as bigots like sharpton, sarsour, omar, tlaib and the like.

Before it’s too late.

Thank the Founding Fathers for the 2A.

If you dont own a gun, get one or two or three while you can. You are going to need it.

Deflect and project. The only two things democrats are good at.

People like DeBlahblahblah just can’t help themselves and are the best thing to happen to the Republican Party in decades. They continue to utter one “Goebbelism” after another. Goebbels openly praised the Democrat Party tactics of the 1920’s and coined the phrase: “If you tell a lie big enough and often enough, it eventually becomes the truth.” We are seeing that play out again…