“You f*cking Jew, your end is coming!” 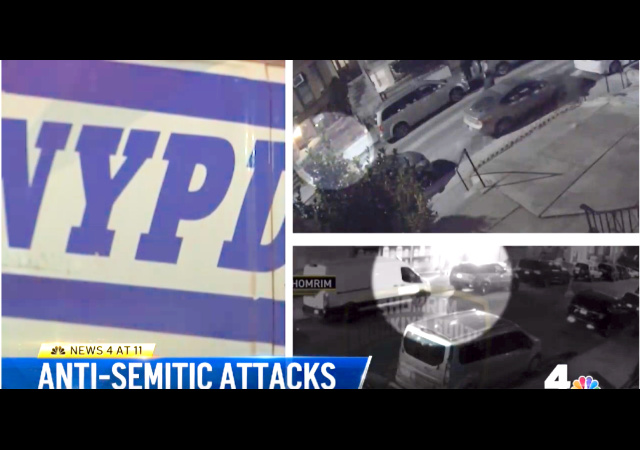 Jews in New York City have faced even more anti-Semitic attacks this week as they celebrate Hanukkah.

Legal Insurrection has documented a lot of the anti-Semitic attacks in New York City in 2019.

The NYPD opened a “new unit dedicated to probing hate groups and preventing hate attacks” after the attack on a kosher deli in Jersey City, NJ. The terrorists murdered six people. Authorities said they “deliberately targeted” the deli.

Mayor Bill de Blasio has consistently blasted the anti-Semitic attacks, but nothing has changed. He said on Wednesday, along with Gov. Andrew Cuomo:

“The despicable crimes committed against our Jewish community over the last 24 hours are an attack on ALL New Yorkers,” the mayor tweeted. “The NYPD is actively investigating all of them and will bring the perpetrators to justice.”

New York Gov. Andrew Cuomo also issued a statement Wednesday, before the reports of the Brooklyn incidents, saying he was “disgusted” by the alleged attack in Manhattan. He also promised to provide state police assistance to the NYPD in the investigation.

“This horrific and cowardly act of anti-Semitism is repugnant to our values, and it’s even more despicable that it occurred over the holidays,” Cuomo said in the statement.

“I’ve talked to the mayor. He doesn’t know what to do,” Hikind said. “We’ve presented a plan to the mayor. Right now, anti-Semitism, it’s not being dealt with. ‘You condemn, you move on, you condemn the next one.’ I wanted the mayor to declare a state of emergency because of these hate crimes.”

De Blasio announced on Friday morning that the NYPD will add more officers in Boro Park, Crown Heights, and Williamsburg. This includes more “visits to houses of worship and other critical areas in the community.”

Anti-Semitic attacks are the most common hate crime in New York City. Out of all the hate crimes reported to the NYPD, anti-Semitic incidents make up 53.7% of them.

Jews suffered at least 166 incidents between January and September.

The hate crimes are not limited to physical attacks. Anti-Semitics have vandalized buildings, including synagogues.

Who are the perpetrators? Are there any common threads between them? Are they MAGA-hat wearing Trump supporters? Or some other group?

why doesn’t someone ask the rev al dullton why his peeps are doing this /s.

No, no, no, don’t look at that, just look at the headline! Rev. Al said that if Trump was elected, there were going to be more Anti-Jewish hate crimes, and there are!!!

Apropos Paul’s question above, it does seem as though someone in the information chain has adapted that old standby, “Guess the Party Affiliation” — and will continue to use it until somebody stages another Jussie Smollett hoax.

the city residents need to recreate the guardian angels.

it is clear that the pols are in office for themselves.
hey bloomberg, why don’t you do something.

Not the “Guardian Angels,” but the JDL. Rabbi Kahane, of blessed memory, would not have tolerated so many attacks in Crown Heights and Williamsburg. In the late 1970s, I helped on night patrols to keep the community safe.

The attackers are members of media protected groups. Their names, etc will not be mentioned. Maga hat wearers would be doxxed in 3 seconds if they were the attackers.

Their names will not be mentioned?! Did you not notice that the two perpetrators who were caught were named?

Have you not noticed that one of your paisanos is about to spring your bud what’s his name?

One of my who is about to do what?

Harassment result of mayors depoliciing policies. But when kaiser bill runs for 3 term will get 90 % Jewish vote in nyc.

Also belated comment on y-day story. What’s his name on verge of being sprung. Who knew who is doing such?

Al sharpton is a swine if an anti semite, so obama opens the white house doors to him. Obama bashes israel. Mooochelle gorles on another vacation. Shartpo is virtuallly living in the white house alongside jarrett. They bring in an army of somalis.the somalis elect tlaib ad omar. Sharpton continues his anti semetic work.

The surprise should be holding sharpton, obama and jarrett accountable.

Bush did more than his share of damage with his idiotic Religion of Peace trope.

I guess he thought saying that over and over again would somehow even the karmic score for the hundreds of thousands of them that he killed.

Muslims have made a pretense of being leftists in order to be drawn into the Democratic Party (other liberal parties elsewhere) and thus be able to spread their vile cult via party doctrine. The left in America has adopted Islamic violence with enthusiasm.

Got a hunch that few if any of these attacks are by, uh, “white” supremacists.

I don’t think we have white supremacists in this part of the country. They’re pretty rare everywhere, but Pittsburgh managed to come up with one. Around here the antisemites are mostly black. Certainly the criminal ones are. I guarantee you nobody in Crown Heights (except one well-known anti-Trump nutcase) lies awake in bed worried about white supremacists.

For clarification, I strongly recommend the article by David P. Goldman at
https://pjmedia.com/spengler/i-accuse-the-leadership-of-the-democratic-party-of-responsibility-for-violence-against-jews/

Tonight there was another attack, this time in what has until now been a fairly safe area, Monsey, NY. A black man entered a rabbi’s house while he was lighting the menorah, pulled out a machete and stabbed several people.