“To date, law enforcement has not been able to locate a single individual who directly received an AirDrop.” 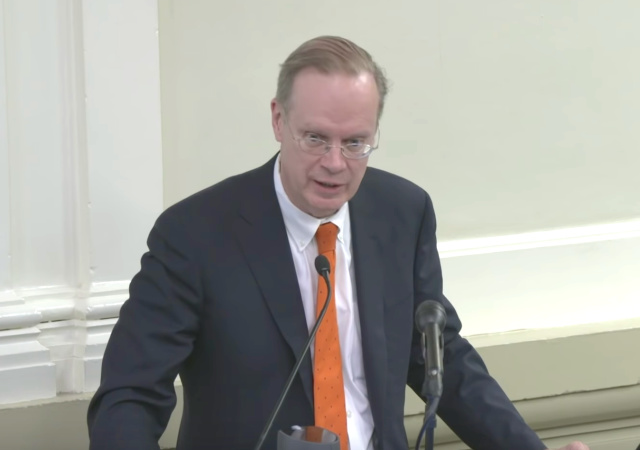 Earlier this week, Syracuse University police investigated reports of a white supremacist manifesto appeared on an online forum and distributed to students via AirDrop on their phones at the library.

Apple users have “AirDrop” on their devices, which “allows users to send photos or documents, among other items, to people around them who also have the feature turned on” if they have enabled Wi-Fi or Bluetooth.

Law enforcement said someone posted the 74-page manifesto “to the online forum Greekrank the night before.”

“To date, law enforcement has not been able to locate a single individual who directly received an AirDrop. Not one,” Syverud said. “It was apparent that this rumor was probably a hoax, but that reality was not communicated clearly and rapidly enough to get ahead of escalating anxiety.”

He said law enforcement had not identified anyone responsible for the spreading of the manifesto, connected to mosque shootings in New Zealand earlier this year.

The close proximity needed for an AirDrop attempted transfer frightened some people, he said. He acknowledged the university was delayed and unprepared to respond to this cyberattack, which caused students to panic.

Syracuse has witnessed “a dozen instances of racist and anti-Semitic graffiti” on campus. The police think “that one to five people connected to the university are responsible for the vandalism.”

The police department announced authorities arrested a suspect for the graffiti:

New: Syracuse Police Department has arrested a suspect believed to be responsible for recent graffiti in and near Irving Garage and Bird Library. pic.twitter.com/bKODxxFXaD

By default I assume events like this are a hoax unless proven otherwise. I have a very high accuracy rate as the details are uncovered.

This reminds me of the incident (in fact, I think it was at Oberlin!) where someone called the police and reported that they saw someone lurking on campus wearing a Klansmen’s outfit. Police investigated, turns out is was a female student wearing a light colored raincoat with a hood. In the rain. Oooh!! Scary!!!

I remember an incident where a student reported seeing a person dressed in a KKK robe and hood standing in a room through an outside window and was very upset about the matter. Turns out the building was a science building and what the precious snowflake saw was in reality simply a piece of science equipment sitting on a table with a white dust cover over it.

Here’s a link to an article about the incident:

The “anti native american” graffiti was probably some sports fan who wrote “Redskins Suck!!!” on the bathroom wall.

If a spineless admin is willing to say “probably a hoax”, you can bet your butt that it is definitely a hoax.

Escalating anxiety? Aw, come on,it’s not going to bite you.

You’d think hoax rules would have to be content neutral to pass constitutional muster.

I conclude immediately that these types of incidents are always fake – until proved not fake.

If the colleges and universities were functioning properly, deans would be counseling snowflake students and advising them that they are not mature enough to be away from home or capable of participating in the rigors of the higher education environment. They should simply be told to come back to school when they have grown up. The tolerance and indulgence of this infantile behavior is nauseating.

Daughter is at Syracuse U currently. They shut down the U and sent everyone off the Thanksgiving early. I want my tuition money back for that lost week due to PC WOKE SAFE SPACE etc madness. Then again, it is a week less of indoctrination she will be suffering thru.

“Bias incidents”? Are those crimes yet?

You guys wanna laugh? YouTube search, “You wanna be the laughing stock of history”. Rep Turner, (R), OH tells it like it is

I watched it live and it was great. I was furious at Holms. T-Rex Tilerson was a big disappointment. Telerson should have disbanded the entire diplomatic staff of the Ukrainian embassy. Yovanovitch should have been asked why the President of Ukrained disliked her so much and why the US Embassy in Ukraine was known locally as Hillary 2016 campaign head quarters. Yovanovich should have been asked who at the embassy was invited to her planned Hillary Clinton election victory party. I imagine Holmes was invited but I cannot for the life of me understand why Holmes is still in the US Diplomatic Service after he publicly belittled and humiliated the President of Ukraine by spreading to anyone that would listen to him that the President of Ukraine “Loves your ass Mr. President, he will do anything you ask of him.” How can someone that does something so unprofessional and damaging as that still be employed. It was great to finally see someone hand that Holmes his head.

Why not just issue these snowflakes a pacifier and a small blanket.

Always look to see who benefits most from these staged pseudo-racist incidents. It is generally the group who wants an excuse to protest in order to gain publicity and control.

So, someone pulled a Smollett. Juicy, but no substance. Not even a yarn worth spinning. Perhaps the ball is unwinding.

On the swastika in the snow, did they recognize the handwriting.

Could they determine the brand of beer the writer drank?