Sweden: Violence-Ridden Malmo Has “More In Common With Baghdad Than With Other European Cities,” German State Broadcaster Admits

Sweden: Violence-Ridden Malmo Has “More In Common With Baghdad Than With Other European Cities,” German State Broadcaster Admits

Deutsche Welle: “Bombings and shootings regularly shake Malmo, so much so that locals find it normal.” 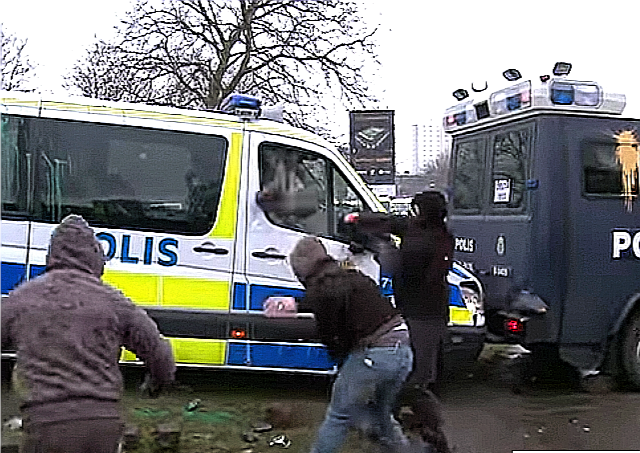 “Bombings and shootings regularly shake Malmo, so much so that locals find it normal,” the German broadcaster added. Deutsche Welle, though describing the current reaction of the Swedish accurately, left out any mention of mass migration from the Middle East and Muslim-majority North Africa, and how this is a key factor driving the city’s violence and crime rates.

Ironically, German state broadcasters like Deutsche Welle have been the foremost cheerleaders of Chancellor Angela Merkel’s open borders policy for illegal immigrants. It is precisely this unchecked illegal immigration that turned Malmo, once a proud Scandinavian commercial and cultural hub, into what many claim has become a Third-World hellhole.

Deutsche Welle reported the deteriorating situation in the Swedish city:

At times it seems like Malmo has more in common with Baghdad than with other European cities. This year 29 bomb explosions rattled the city of 317,000 as of November 11. Police reported 50 shootings in the Malmo region by the end of October — in a country where guns are hard to come by legally.

Formerly an industrial town known for shipbuilding, Malmo has remade itself since the Oresund Bridge, which connects it to the Danish capital, Copenhagen, opened in 2000. Sweden’s third-biggest city has become a knowledge hub, with a new university drawing students from Scandinavia and abroad and more and more companies, including gaming industry giants Massive and King, setting up shop on the eastern side of the straight. It’s also the country’s most diverse city: Around a third of its people are foreign born.

Malmo residents are used to seeing almost daily reports about violent crime. On Tuesday, for example, public broadcaster SVT reported that gang members had forced a grocer to allow them to stash drugs in his city center store. Police have been struggling to contain the violence, which they attribute mainly to gangs that deal drugs.

The latest efforts have been prompted by a November 9 shooting in front of a pizzeria, which killed one 15-year-old boy and put another in hospital. Police declared a national “special event” and set up a task force to quell gang violence.

The mainstream European media has done everything to cover up the nature and the extent of migrant crime in Malmo and throughout the rest of Europe. “Malmo, along with other urban centres in Sweden, has one of the highest levels of reported rapes in proportion to population in the EU,” BBC admitted in early 2107. The British broadcaster, however, attributed these high rates to “strictness of Swedish laws.” Conveniently enough, the politically correct Swedish police keep no data on the ethnicity of the perpetrators.

For a discerning observer, the signs of things to come were apparent from early on. The city’s tiny Jewish community was the first to face the wrath of the incoming Muslim gangs. As early as 2010, Professor William Jacobson pointed to “Malmö Syndrome.”

“Malmö is the third largest Swedish city, and now the poster child for what I call Malmö Syndrome, the anti-Semitic violence which results from the shared anti-Israeli agenda of Islamists and leftists,” he explained.

In a separate Legal Insurrection post the same year, Professor Jacobson highlighted how the “Islamists across Europe have used anti-Israel agitation to justify acts of anti-Semitic violence, and anti-Israel leftists have either encouraged or excused such violence, as in Malmö.” Violence against the city’s Jewish community was just an ominous beginning, as “Islamist agitation against Jews and Israel inevitably spreads to agitation against Western civilization in general,” he predicted.

Needless to say, those and other warnings went unheeded as Europe opened its borders to illegal immigration from the Middle East and Arab North Africa. Just days before Chancellor Merkel opened Germany’s border, triggering a huge influx of migrants, I wrote in the Gatestone Institute (September 20, 2015): “German media is in lockstep with the government, giving happy-talk and a positive spin on migrant crisis of gigantic proportions hitting Europe.” Major media outlets, I added, were “not merely willing executioners of Merkel’s open border policy, they are ideological players committed to breaking any opposition to the plan.”

The mass migration, championed by the mainstream media and Europe’s political class, has transformed the Scandinavian country’s demographics. Sweden, a country of around 10 million, has a Muslim population of roughly below 10 percent.

According to Pew Research Center, one-third of the Swedish population will be Muslim by 2050. Malmo, where around a third of the population is already Muslim, might be a good indicator of how Sweden might look within a generation’s time.

Media silence over ‘migrant crime on women’ in Sweden

Is there going to be a flashpoint where non-Islamic people rise up and force these governments to deport people or is it essentially too late and we are going to see civil wars break out in many countries?

No. Even if the people did rise up in opposition, their betters in government — elected officials and bureaucrats alike — would ignore their wishes.

Too late, civil war is my opinion.

Their imports will never stop until the natives submit. The native politicians are committed to communism and see the imports as useful to that end.

Eventually it will blow up.

… And promptly be sold to the highest bidder..

Unless Muslim immigration is severely restricted, America will have a second civil war. When you bring in the Third World, you get the what you bring in. Islam has not produced one functioning democracy that guarantees rights to minorities. Islam and Muhammad cannot withstand scrutiny. Islam’s response is not to modernize – which it can’t – but to whine about so-called Islamophobia and attempt to impose blasphemy laws.

Let this be a warning to us and how it can be if we allow open borders here.

Open borders are folly, but the debacle in Sweden is a foreseeable consequence of insane Muslim immigration. The virtue-signalling feminist Swedish government have created this irredeemable mess.

This is what the democrats desire for the USA.

So scary
Where are the Swede men?

Feminized by militant feminists. The State and culture would come down hard on any capable man who fights back.

Soon the feminists will dump their Swedish men in favor of the Muslims. Soon after that, they’ll cease being feminists.

Soon the feminists will dump their Swedish men in favor of the Muslims. Soon after that, they’ll cease being feminists.

They moved to England about a millenium ago.

In MN, voting for Omar.

They emigrated to the American prairies about a century ago–along with the Norwegians.

According to Swedish National Police, “Bombings in Sweden have reached a level that is unique for a country not at war.”

Deportation is not the answer. It is illegal. The solution is to ban Muslim immigration.

Someone on the radio said that “if you bring what is there here, then here will become there”!

The same is true of the US media, refusing to mention crime by minorities and illegal aliens.

Don’t worry. The Islamic Republic of Sweden will impose order.

Oh, yeah: Lovgren is still PM, and said in an interview last week that immigration was unrelated to these problems which he, of course, ascribes to the ethnic Swedes.

The Swedes always were a violent people. Right?

“It’s also the country’s most diverse city: Around a third of its people are foreign born.”

Diversity is our strength. Now the Swedes are learning all about the advantages of third world cultures.

Another win for ‘multiculturalism’.

Multiculturalism is the ultimate expression of liberal guilt. They don’t think Western culture is laudable or even useful.

So they import a huge number of people from shithole countries based on their guilt of their success. Except they don’t require them to assimilate, and pretend their culture is just as good.

Shocker, the ‘culture’ of 3rd world countries IS the problem. And when you import it in large numbers, you turn your own country to shit.

So it turns out violence is not an effect of sand after all.

When will the Swedes channel their inner Vikings, take up arms, and eradicate the aliens causing all the problems?

Vote in crazy leftist women to run the country. Check.

we are watching the slow disentegration of europe–disturbing indeed–the young swedes(the youth and the children)must be asking their parents ” why is this happening? ” and ” what are you going to do about it? ”

that is a hell of a thing when your own children look you in the face and ask you for help–that is when good men and women must rise and do their duty–without rancor but without pity, they must do what must be done to restore the safety and peace of their country

Naah. In Sweden, children look their parents in the face and say, ‘What are you doing to protect us from global warming?’ They’re not in the least concerned about being knifed or shot on the way to and from school. . . . At least, that’s what their parents must be telling them: ‘Be like Greta Thunberg.’

This must have been what it was like to watch the Roman Empire being overrun. ‘But children, the Huns and Vandals are people just like you and I. Our Empire needs more diversity; it was unfair of us to keep the blessings of civilization for ourselves only.’