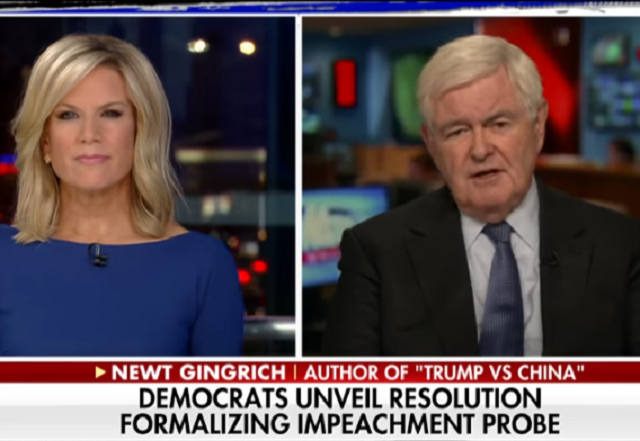 Former Speaker of the House Newt Gingrich penned a piece for Fox News in which he said that Thursday’s House impeachment proceedings vote was a “strategic defeat for Nancy Pelosi.”

The Halloween vote for impeachment was an enormous strategic defeat for Speaker Nancy Pelosi.

She admitted seven months ago, in a March 6 interview with The Washington Post, that a purely partisan impeachment vote was wrong and dangerous. She was right. Here are her own words:

“I’m not for impeachment. This is news. I haven’t said this to any press person before. But since you asked, and I’ve been thinking about this, impeachment is so divisive to the country that unless there’s something so compelling and overwhelming and bipartisan, I don’t think we should go down that path because it divides the country. And he’s just not worth it.”

Measured by that standard, the Thursday vote was a terrible failure. The House voted in an entirely partisan manner except for two Democrats who split to vote no with the Republicans.

Months of leaks, secret investigations, news media hysteria, and a parade of witnesses failed to move a single Republican to vote yes.

The so-called whistleblower has decayed into a potential liability so much the Democrats are now talking about never bringing him to testify.

Senate Republicans have been so turned off by the House Democrats that Senator Ben Sasse of Nebraska, one of President Trump’s more outspoken Republican members, has called their effort “a partisan clown show.”

Gingrich further argues “that there is an overwhelming belief among Republicans and many independents that this effort is a coup d’etat, which is a sore losers’ effort rather than an impeachment based on the merits.”

He also makes the case that the partisan nature of the vote underscores that belief.

The contrast with the last impeachment vote is striking. In 1998, 31 Democrats voted with the Republicans to create a bipartisan 257-176 majority for moving forward with impeachment.

By contrast not only did no Republicans vote for the Pelosi impeachment, but she also lost two Democrats despite enormous pressure within the caucus.

The American people understand the difference between a fair and an unfair process. As Ron Faucheux reported in the October 32 Lunchtime Politics, there is an Economist/YouGov poll (October 27-29) which reported that 49 percent of Americans thought the Clinton impeachment proceedings were fair. Only 25 percent thought they were unfair and 27 percent weren’t sure.

. . . . Measured against her own standard, the vote on Halloween was a terrible defeat which is likely to haunt the House Democrats through the 2020 election.

That vote will cost a lot of Democrats their seats next year. When combined with the radicalism of the national Democratic candidates for president, and the continued economic growth under President Trump’s policies, it is likely that Thursday’s vote guaranteed this would be a one-term Democratic majority, and we will be hearing from Speaker Kevin McCarthy in 2021.

Watch him discuss the House vote before it took place on Halloween.

Time will tell. What we do know is that Republicans underestimate appeals to empathy and overestimate feminist empathy for women. Children, as in selective-child, too, are denied a voice.

As for the impeachment, it seems to be little more than a political racket designed to protect the special and peculiar interests that forced humanitarian crises in Kiev, Syria, Libya, Europe, etc. Also, profits from environmental (Green) and labor (Just do it!) arbitrage, and democratic gerrymandering (e.g. immigration reform).

Clinton was impeached for an actual crime, which nobody disputes he committed, and for which other people go to prison.

The least he could have done, if he wanted to make the case that perjury about ones sexual affairs, in a civil case, is a crime the law should go lightly on, would have been to release everyone then serving time in federal prison for the exact same offense. The New York Times found eight such prisoners. If he’d pardoned them all he could have legitimately asked Congress and the public to treat him with the same leniency. But he didn’t.

I will now list all of the allowances to Rule of Law and to Rights of the Accused that the Democrats included in their Halloween bill to conduct impeachment hearings.

And make no mistake: we are on the verge of a civil war, and one election away from a psycho like Fauxcahontas starting it, by giving the IRS ‘super duper’ powers, if not giving them to the likes of Antifa goons.

We suffered through one obama and lois lerner – and the near fascist takeover of the ‘police department’ created under obamacare, reporting only to the president.

That war weaponry is still in place, and is one election within the hands of a psycho like obama, Fauxcahontas or hillary clinton. Or the likes of kamala harris, if she gets off her knees long enough.

The first World War was started by shooting some idiot ‘Duke.’ Just think of the hair trigger within our own country.

Just knowing that if the Left ever gets control of the government that there will be no possible way that they will allow any legal or electoral change of power ever again tends to sharpen the mood.

notamemberofanyorganizedpolicital | November 4, 2019 at 7:17 am

Is this a George Sorass losers’ effort?

The democrats are demonstrating in the “Impeachment Hearings” what they plan to do when and if they take over the country.

First they will abolish the Bill of Rights.
That allows them to confiscate any and all weapons, guns, knives, pressure cookers, etc. They will determine what someone can say.

They will conduct hearings or prosecutions in secret. They will not allow the accused to hear all accusations or charges against him. He could be found guilty even though no law was broken. He will not be allowed to confront his accuser.