In response, China summoned U.S. Ambassador Terry Branstad to demand that US stop interfering with their internal affairs. 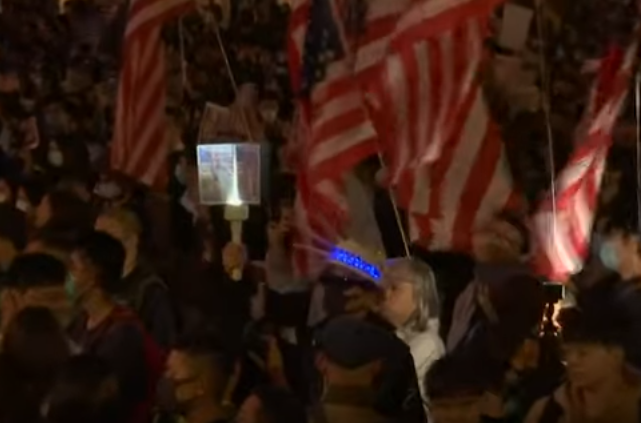 President Donald Trump has signed the Hong Kong Human Rights and Democracy Act, which is aimed at ensuring that Hong Kong has sufficient autonomy from China by tying the city’s liberty to trading terms with the United States.

Hong Kong residents, which recently voted in a suite of pro-Democracy candidates to key positions in district councils, waved American fans in thanksgiving for the important sign of support from this county.

Protesters in Hong Kong will hold a celebratory, pro-US rally Thursday after President Donald Trump gave them what one prominent activist termed a “timely Thanksgiving present.”

Trump signed an act in support of the protest movement despite a potential backlash from Beijing that could derail delicate US-China trade talks, after it was passed almost unanimously by both houses of Congress.

Anti-government protesters in the semi-autonomous Chinese city have long campaigned in favor of the bill — which would permit Washington to impose sanctions or even suspend Hong Kong’s special trading status over rights violations. Trump’s decision to sign the act gives the movement a second major symbolic victory in a matter of days.

This Thanksgiving, I am grateful that we have foreigners who want to wave the American flag instead of burn it.

These photos from the pro-democracy protests in Hong Kong are incredible.

The protesters gathered on Thanksgiving to show their gratitude to Congress and @realdonaldtrump for passing legislation that supports their efforts. #Thanksgiving pic.twitter.com/BVHSsyKwX5

Hong Kong Thanksgiving and “Thank you” USA rally was held at Edinburgh Place this evening; although it was planned early last weekend, the event coincided with President Trump signing the #HKHumanRightsandDemocracyAct
Estimated crowd was 10,000 pic.twitter.com/LuV9Jbidnq

Some signs even included a snarky slam to recent media hysterics.

Thank you and Happy Thanksgiving!

Here’s the story from Hong Kong, have a smile! (From Daily Caller) pic.twitter.com/iTes2gBCyE

Meanwhile, the Chinese Panda is howling over the move…yet is still moving forward with trade talks.

China vented on Thursday after President Trump signed new human rights legislation covering the protest-wracked city of Hong Kong. It denounced the new law as illegal interference in its own affairs. It summoned the American ambassador [Terry Branstad] for the second time in a week. It vowed retaliation.

Behind the harsh rhetoric, China has few options for striking back at the United States in a meaningful way. And it has bigger priorities — namely, ending the increasingly punishing trade war between the two countries. Though both sides are talking about their willingness to reach a deal, they have yet to sign even an interim pact that would head off potentially damaging new tariffs less than three weeks from now.

On Thursday, Beijing’s main agency on trade remained quiet on the legislation even as other officials railed against it, suggesting that the government remained open to a trade deal and would let the volatile issue of Hong Kong simmer, at least for now.

Hopefully, the Act and the support of America’s representatives will be such that Hong Kong’s citizens will have reason to give thanks next Thanksgiving as well.

Maybe we should bring all the Hong Kong residents celebrating the U.S. over here and send the Democrat presidential wannabes over there.

Considering their enormous role in the corruption of our schools and our media, they can’t really justify complaining about our support of Hong Kong freedom, can they.

Whoops: forgot to mention the chi comm corruption of our politicans (Dianne Feinstein, McConnell and his wife, to name some).

Finally, we can only imagine how the chi comms must have kept obama-jarrett on a $hort lea$h. Then, of course, there is clinton, who had her grubby hands in everyone’s till.

Every Republican College Organization on Campuses across America should OPEN up their public meetings and presentations with a collage video with the highlights of the protesting students in Hong Kong over the previous weeks, focusing on the Why and What protesting your government means to be able to have the freedoms they take for granted. Intersperse it with video of our own American Students and their protests always playing their victim card depicting everyone but themselves as having no right to free speech. Then end the film with the attached video of these brave students and residents of Hong Kong waiving OUR American Flag and singing OUR National Anthem and ending it with One Voice shouting repetitive “U.S.A.”. Perhaps some of the video coming out of Iran or the collective re-education camps in China could be included as a follow up to where today’s progressives would have us go.

Please, don’t let this mean they want us to colonize them–even if I’m touched enough to think of studying Cantonese (I already have Mandarin and smatterings of Hakka and Hokkien).

I’m all for striking for ordered liberty and against the arbitrary and opaque legalities of the world’s last, best hope for 20th century totalitarianism. But, ultimately, the US doesn’t do imperialism well.