Trump Breaks the Internet, Media (Again) With Picture of Himself as Rocky

Trump Breaks the Internet, Media (Again) With Picture of Himself as Rocky

TDS will never let us down. 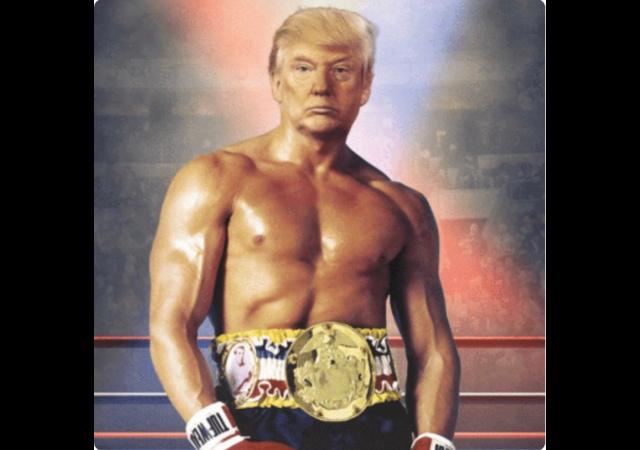 It does not take much for President Donald Trump to break the internet, the left, and the media.

Trump did it once again on Wednesday when he tweeted a picture of himself as Rocky.

Coincidence? Probably not. It’s not a secret people have grown tired of Trump Derangement Syndrome. More and more polls show people moving away from impeachment.

Viewership of the impeachment hearings is down the drain.

I mean, The Washington Post lost it over this “doctored” photo. UNCLEAR WHY!

“Doctored” has a specific meaning and use.

Here it’s clear Trump was posting a meme; not trying to trick people into believing he was the star of an 80’s movie.

This is why people don’t trust the media. pic.twitter.com/7yoDHaHPl1

@washingtonpost puts “unclear why” at end of tweet, unclear why

Okay, okay, okay. I have to admit some of the reactions from the left cracked me up.

wasn’t it Stallone that starred in a b-grade 80’s movie about face swapping to catch a REALLY BAD GUY?

I think that was “Face Off” with John Travolta and Nicholas Cage….

ah, yes, you are correct. Thanks

And how do we know that photo was doctored?

I doubt that is his real hair…

I was hoping Trump would declare today to be National Thankstaking Day for the ignorant woketards offended by Thanksgiving Day.

Now I’m off for a special day of driving vegetarians and vegans to madness. I expect to pounce on a lot of prey, ripping it apart before I eat it. Yum.

This is clearly an “in your face” to the swamp. WaPo is clueless.

Even if the picture is not entirely accurate, we must believe the author. (sarc)

Too bad Trump’s parents aren’t alive to witness the result of their master parenting.

What an amazing, good man.

At Trump’s latest rally in Florida, he spoke about going to the hospital last week and having to have the physicians look at his “magnificent chest.” Meme mystery solved.

Seriously, all these people have to do is read.

I am surprised that we are not hearing about TDS induced heart attacks, seizures and other life threatening TDS related incidents.