The #TrumpDergangementSyndrome is strong with this one! 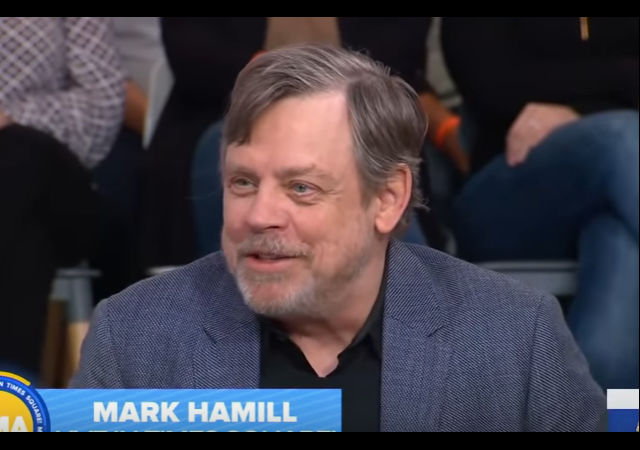 Before Donald Trump became President, it was generally the practice that the press and respected celebrities would refrain from smears that impacted non-adult offspring.

However, that was before #TrumpDerangementSyndrome became so widespread.

Consider, for example, Mark Hamill. The famous Star Wars actor took to Twitter to deride Ivanka Trump after she posted an adorable picture with her son dressed as an Imperial Stormtrooper.

Here is the original message. 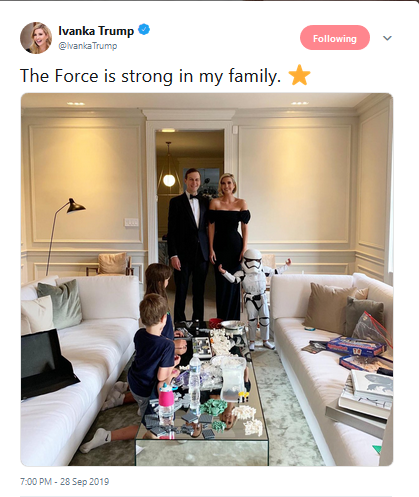 Here is Hamill’s Dark Side response: 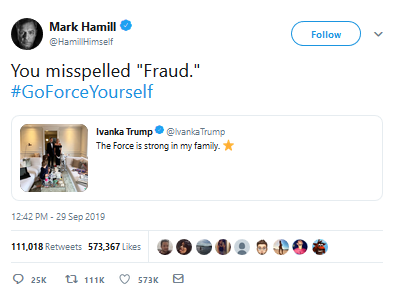 The tweet has since garnered over 500,000 likes and 100,000 retweets. Reactions were polarizing, with some accusing Hamill of wrongfully attacking innocent young Star Wars fans.

“You sure owned those kids, Mark. Good one,” one person wrote, sarcastically.

The intensity of the negative response was such that Hamill had to clarify is Star Wars witticism.

Hamill later clarified that he was not targeting Trump’s child after a user zoomed in on the Stormtrooper costume and wrote, “Forget the parents… this kid rocks.”

Earlier, one user wrote, “Way to attack a child.”

Another added, “God—-, Mr. Hamill. A kid in a Star Wars costume isn’t political. People are allowed to like Star Wars. Nice. Picking on a kid. High class.”

Ivanka Trump did not respond to Hamill’s inanity. However, many offered her family support. 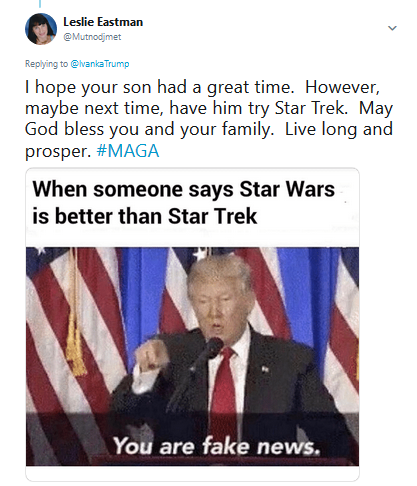 I will also point out that it appears that it was the Evil Luke Skywalker that made it out of the Dagobah cave (from the best movie of the lot, The Empire Strikes Back).

It’s bad enough that the social-justice-infused franchise is now so overwrought that my son, who adored those movies, doesn’t want to see The Rise of Skywalker. He also has lost his interest in heading to Star Wars World in Disneyland, which is nearby and something he had been looking forward to just a couple of years ago.

It appears that he isn’t the only one who has lost his enthusiasm, either.

Many anticipated that the two nearly identical versions of Star Wars: Galaxy’s Edge would attract gargantuan crowds. This hasn’t been the case. According to Touring Plans, a site which tracks the wait times at Disney rides, overall attendance at Disneyland has gone down since Star Wars: Galaxy’s Edge opened. The website’s president, Len Testa, predicted that attendance at the park would increase by ten to twenty percent in recent months, so the news that attendance has gone down is a major surprise.

Catherine Powell, who oversees the U.S. and Paris theme parks for The Walt Disney Company, is leaving the studio in the wake of these developments.

In conclusion, Hamill may want to reflect upon some sage advice his character once gave.

Another dim bulb of an actor has spoken…yawn.

notamemberofanyorganizedpolicital in reply to MAJack. | October 1, 2019 at 9:50 am

Mark Hamill is and actor?

Could have fool me.

Coffee is one of the five food groups right?

Valerie in reply to notamemberofanyorganizedpolicital. | October 1, 2019 at 11:58 am

It might not be you. Lately, autocorrect has been replacing “to” with “too” for me, wholly incorrectly.

alaskabob in reply to notamemberofanyorganizedpolicital. | October 1, 2019 at 1:26 pm

In another post I typed “Cue” and got “Che”. Hum…. I wonder who created that algorithm?

Leslie Eastman in reply to notamemberofanyorganizedpolicital. | October 1, 2019 at 1:45 pm

Clearly, the Dark Side is now in control of the algorithm.

MajorWood in reply to notamemberofanyorganizedpolicital. | October 1, 2019 at 6:40 pm

I typed in Schumer and got Schemer so it seems to be working for me.

His big love scene was kissing his sister. Now he is picking on kids. Sad.

She was a really good skater before she transgendered. Oh, that’s not her? Who is he them?

Hamill already has his money and fame from the Star Wars franchise, so he doesn’t care what happens to it.

And neither do millions of former fans, apparently. But fear not, Disney! There will (probably) be enough suckers to buy the tickets and merchandise and keep the franchise from being obliterated by the Death Star of Lousy Business Decisions.

notamemberofanyorganizedpolicital in reply to Recovering Lutheran. | October 1, 2019 at 9:55 am

There are some very good “fan” blogs that have documented with tons of pics and editorials how there is literally “tons” of unsold Star Wars merchandise from their last few films.

With CGI there is Zero need of Hollywood.

don’t do social media/twitter, etc.–if was so inclined would respond to him directly:

you’ve lost your personal honor, mark–get over yourself–everyone else has

His midichloridians have become old and grumpy.

notamemberofanyorganizedpolicital in reply to DouglasJBender. | October 1, 2019 at 9:56 am

He has become his father – Darth Vader.

Tom Servo in reply to notamemberofanyorganizedpolicital. | October 1, 2019 at 10:36 am

someone on Twitter pointed out that Luke’s father Anakin slaughtered the innocent children at the Jedi Temple, so it runs in the family

urghh, you reminded me. “oh no the younglings!!!” Gawd, George Lucas is a horrible script writer.

I just read the link to the Cheatsheet article. One excuse for the poor attendance at the Star Wars theme parks is “fear of long lines” .

A problem with their parks? They need to put Tom and Greg from “Succession” on to it pronto. Burn a few documents, everything is fine.

And why do we care what Joey Bagofdoughtnuts says?

The two things he’s best known for since Star Wars: he was the voice actor for the Joker in Batman: the Animated Series, and playing Trickster, DC’s Joker clone, in The Flash live series.

Two of the most psychopathic villains ever conceived, and this guy plays BOTH of them. Says something, doesn’t it. Dark Side Luke is real.

I don’t know about that Star Trek Comment. Star Trek has been considerably more liberal and progressive than Star Wars in the past, but I guess the whole Star Wars focus on women is starting to change that.

Personally, I am referring to “Star Trek – The Original Series” when I wax nostalgic about that series. It was a time when men were men, women were women, and Klingons were Klingons. Good times.

Have we reached the point yet where there are no straight white males in a Star Trek spinoff?

I agree once it is limited to the original series. It was a great show unstained by the foggy, grey morality of the later versions.

…and every single episode was a thinly-veiled 1960’s progressive morality play Roddenberry blew by the network censors because they weren’t paying attention to a kid’s show.

Any soi-disant conservative who prizes the themes and messages of TOS over the original Star Wars trilogy (independence, freedom, defying unjust authority, humans over technology, faith) is letting their nostalgia overwhelm their common sense.

While some of your assertions can be argued, I am going to counter that many of the crew/writers redirected Roddenberry’s efforts to create work much more supportive of the conservative viewpoint.

As proof, I offer this gem.

Finally, insulting conservatives for a culture preference by insinuating we lack common sense and are “soi-disant” is not logical.

Clearly “The Man Trap” echoes the liberal perspective on fracking; albeit on humans for the mineral salt (giggle!) Destroy the frackers! 😉

More seriously, I don’t remember where I saw it, but concerning the food replicator there is the impression that it gives something for nothing. Oh how positively liberal that is! To be FREE of shopping for groceries and cooking. Yet how often did they have to dock up somewhere and replenish supplies? Anyway – I saw somewhere that the meals weren’t something from nothing but rather had been prepared by humans from real food and were simply held in transporter stasis until ordered from a replicator – it was simply a miniaturized transporter pad. I don’t think that was ever made clear in any of the episodes which allowed viewers to wrongly conclude that some kind of liberal utopian dream had been realized in the Star Trek universe.

Kind of interesting too that you never saw a character customize an order, other than perhaps Picard who specified the temperature of his Earl Grey tea. So I guess the replicator was part microwave, too.

Star Trek TOS has one feature about it that would not be possible in Hollywood today: the supernova-hot Starfleet and alien babes in skimpy costumes! No one will ever match the beautiful Lt. Uhuru, let alone surpass her! If nothing else Star Trek TOS took the sexual revolution to its fun conclusions.

By contrast Star Trek TNG and the rest feel like they were written by a joint effort of the Junior Anti-Sex League and the Soviet Politburo, where the only “hot” babes are possibly the shapeless lava rock aliens delivering dreary Marxist sound bites. I think the reason the TNG writers used the Holodeck in so many episodes was to give the characters (and the audience) a chance to escape the crappy, sexless universe they created with their boring PC storylines.

I’ve tried to avoid reading this story, out of the memory of a really good movie performance. The best part of Mark Hamill is on the movie screen. His opinion on politics is irrelevant because it is outside his area of even tenuous expertise.

What is truly amazing is how the memory of has-been actors is so weak. One would think that if someone is indirectly praising a piece of your film work that you would be pleased. But politics is even stronger than professional acclaim in Hamill’s case. He has nothing but the original series to claim fame from yet acts like his condemning of Ivanka’s son is credible as a political strike. This is a toddler! Is that the new low for a liberal? The old saying of, “It is better to be thought a fool than to open your mouth and prove it” seems to have been written with Hamill in mind!

So nobody’s going to point out the messaging fail of dressing your kid like the faceless stormtroopers of an evil empire?

I’m not mad at Hamill for attacking the Trumps. I’m mad at him for missing a joke so obvious it writes itself.

Apparently, only 49-year-old children are off-limits to the media. And then on,Ymir they are Democrats.

Oops. And then only if they are Democrats. This commenting section really needs an edit button.

Just another in the long line of Trumpenfreude recipients. BTW, has ANYONE heard from Megyn Kelly lately?

Another Closet Case is busting out all over (and it’s not even June)!

Video: Leonardo DiCaprio Rips Trump for ‘Denying the Science of This Climate Catastrophe’

Well he is a member of The Four H Club……
Hateful Hollywood Hasbeen Hacks.

Hamill is a moron, but I wish Ivanka would not post stuff about her kids. Don’t draw attention to them and let them have as normal a life as possible. Every parent thinks their child is just so adorable that everyone wants to see them doing cute stuff. The reality is that no normal person wants to watch stuff about other people’s kids.

Who cares what any washed-up, flash in the pan actor has to say about anything?

Remember the original term for “actor” in ancient Greece was “someone who wears a false face”!

The guy is living off his Star War role from decades ago. Since then he gets a few bit parts playing…..himself.