After widespread media and social media attention, the Elizabeth Warren Wiki page has been restored, but the risk of shutdown by big tech remains. 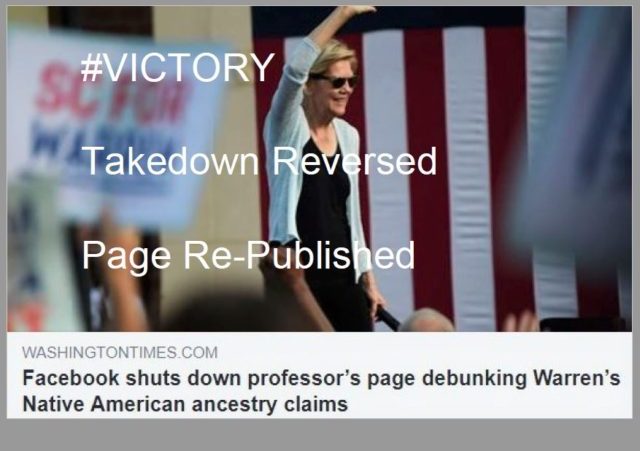 Yesterday I wrote how Facebook takes down Elizabeth Warren Wiki page devoted to documenting her Cherokee and other controversies.

The Facebook page went live in February 2013, at the same time that ElizabethWarrenWiki.org went live.

The takedown was based on the plainly false claim that the Facebook page violated Facebook’s “Impersonation” policy:

We clearly do not violate this policy. The Wiki page does not purport to “impersonate” Warren — the title of the page specifically has “Wiki” in it indicating it is not purporting to be Elizabeth Warren. Beyond the title, the “About” section makes the following disclosures (which are what the Facebook policy says should be done — see above)…

Elizabeth Warren Wiki’s mission is to be the most comprehensive repository of information and links regarding Elizabeth Warren, United States Senator from the Commonwealth of Massachusetts. This Wiki site is not affiliated with Senator Warren or her campaign.

Nonetheless, the page was taken down without warning based on a false claim that it violated Facebook’s Impersonation policy.

My tweet announcing the takedown has received almost 1000 retweets:

.@facebook takes down Elizabeth Warren Wiki page devoted to documenting her Cherokee and other controversies https://t.co/iio7zxwRRE 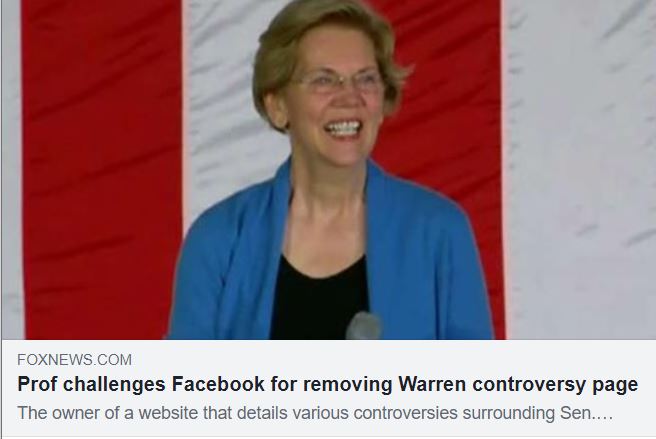 …. Jacobson maintains that the page was in line with Facebook standards as it carried a disclaimer that said that it was not affiliated with Warren’s campaign or Senate office. He posted a screengrab of that disclaimer in an article for Legal Insurrection. He also said that the site never attempted to impersonate Warren, even with the disclaimer.

“I think we covered all our bases, and I don’t know how this happened,” he said. 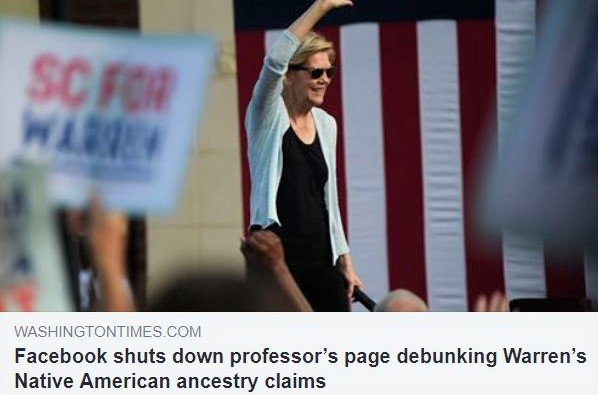 The page’s manager, Cornell Law School professor William A. Jacobson, said Monday he received a message from Facebook saying, “Your page has been unpublished,” because it “doesn’t follow the Facebook Page Policies regarding impersonation and pretending to be an individual or business.”

Mr. Jacobson, who also runs the conservative news-and-opinion outlet Legal Insurrection, contested the decision, noting that the page states in its mission that, “We are not affiliated with Elizabeth Warren’s Senate office or any of her campaigns.”

“We clearly do not violate this policy,” Mr. Jacobson said on Legal Insurrection.

He said there had been no indication of problems with the page, a companion to his Elizabeth Warren Wiki site, until supporters of Sen. Bernard Sanders, a Warren rival for the 2020 Democratic presidential primary nomination, began citing it on social media.

“It may be ‘coincidence’ that just after the Wiki received attention in the looming Bernie-Warren battle, Facebook took down the Wiki’s Facebook page (not the Wiki website, which thankfully Facebook does not control) based on a demonstrably false claim that the page violates Facebook’s ‘impersonation’ policy,” Mr. Jacobson said.

He posted tweets from Sanders supporters who linked to information on the Wiki page, including her allegedly plagiarized “Pow Wow Chow” cookbook recipe and her claim that she was the “first nursing mother” to take the New Jersey bar exam, which a state judiciary official called unverifiable.

Both the Fox News and Washington Times articles indicated they had reached out to Facebook for comment. That media attention likely was a big factor in the page being restored. I received this notice at 7:11 p.m. tonight:

So the page is back, but the risk of shutdown by big tech remains.

So, no apology and no explanation of how they so egregiously screwed the pooch?

Facebook routinely blocks people who express opinions they do not like. They, and many other media outlets, censor in a way which makes it look like there is more support or less opposition to their agenda than is the case. This is much like what they did with Killary, where the hype was that she was going to win, while the reality is that she is widely disliked and distrusted. We the people are nailing Killery’s coffin shut. I suppose that now I must worry about an unplanned suicide.

Facebook hates those who disagree with its “progressive” (aka leftist) politics. Weird given Zuckerberg has a beef with Warren, but I am sure she has plenty of fans among Facebook employees.

That depends on how devious Zuckerberg is. The immediate result has been to draw much more attention to the Elizabeth Warren Wiki, which is pretty damning.

He’s been pretty vocal about her anti-big tech rhetoric. Popcorn time watching a big-time leftist suddenly coming face-to-face with the potential consequences of his politics. Of course, Trump’s talking anti-trust too.

“the “first nursing mother” to take the New Jersey bar exam, ”
****
Does she still have a New Jersey law license? IIRC, during her first Senate election, it was reported that she had surrendered her NJ license and her records had been sealed. For a person to surrender a professional license is, IMO, quite unusual unless it’s under duress. This was in addition to practicing law out of her Harvard faculty office without a Mass. law license.

For a person to surrender a professional license is, IMO, quite unusual unless it’s under duress.

No it isn’t. Not if it’s not being used any more. Why pay fees and take CLE to maintain it?

“… it was reported that she had surrendered her NJ license and her records had been sealed. …”

Hmm. Just curious. Then what explanation has she given for it’s surrender? And surely, sealing records isn’t SOP either.

It was not “surrendered”. It was “resigned without prejudice”, during her senate campaign. There’s no reason to suspect anything more than that she was never planning to practice law in NJ again, so why pay and take CLE to keep the license up? And where are you getting this claim that any records were sealed?

They were afraid I would post negative comments about them and what they did. Wise of them to reverse course.

Facebook as a company has a history that is legendary with respect to repeated bad conduct and backtracking in the face of public exposure of its bad conduct.

Fox News shows the site is back…..

Good enough that they backed down, but I’m sure you know that it does not come even remotely close to solving the underlying problem.

You said in yesterday’s article that the page had close to 600,000 views. That is in 6 years? Can you give us an update in a week or two with an updated number? It is way too convenient that the release of a Zuckerberg attack on Warren occurs within 24 hours of your page being taken down. This is Facebook orchestrating the Striesand effect.

It is is certainly a mere coincidence that The Zuck is currently pi$$ed at Warren for her (only claimed, but that’s enough) commitment to break the web monopolies.

Moving the CA primary to the very beginning has guaranteed that the next Dem nominee will be a communist. Nothing else will matter after NH and CA so money will dry up for the trailing candidates securing the path to victory to whoever takes the early lead. It’s not likely that the other big states will deviate from CA. We may very well be looking at Warren as the nominee and that will chase the highly coveted Wall Street money over to Trump.

Finally! A key witness suicide that helps our side!

I expect the D nominee to be Harris. It’s clear that Biden won’t survive the Ukraine stuff, and that Bernie won’t fly with the D media. That leaves only the fake Cherokee and Harris, and in the end I think the Dems will be cowed by Wall Street.

Not only that, but Harris has always had the Clinton/Hollywood machine behind her. She’s slippery enough to appeal to the media, and will be a “two-fer.” I had expected her running mate to be Sherrod Brown of Ohio, but am increasingly expecting it to be Amy Klobuchar of Minnesota. The media will be over-the-moon orgasmic for that ticket.

It’s always amazed me what a liberal can get away with.

First of all, they’re Leftist radicals, not liberals. Their pushing of hate speech laws and censoring ideas they don’t like is far from liberal. Second, their getting away with murder happens because they have the major media, academia, and the corrupt education machine in their pocket.

If Big Chief Pimple-on-her-tongue Warren gets the nomination, I hope people have the guts to push her lying, illegal law prcatice, and other such things front and center.

Perhaps it’s the way Poky, with tiny bulbous eyes, chooses her stage clothes to hide her little cannibal self. She’s a stick holding up a cardigan. What’s that, akimbo, third world?

I don’t know, but something about her stage presence calls to my mind a hollow figure, a slight, angular, stick figure, like a hollow-boned praying mantis about to devour the heads her prey while they worship her.

Jacobson is “some law professor” (I always hear that in the voice of Charlotte reading her web writings to Templeton and Wilbur!)

I’m upset that YouTube seems to be hiding the videos of Fauxahauntas dancing like a spastic Elaine Bennett at the start of her rallies.

The open thing about FUAXAHONATS is the left cannot say Trump lied when in fact they heard what they wanted to. She a walking lie.