As the research Wiki received attention in the looming Bernie-Warren battle, Facebook took down the Wiki’s Facebook page based on a demonstrably false claim that the page violates Facebook’s “impersonation” policy. 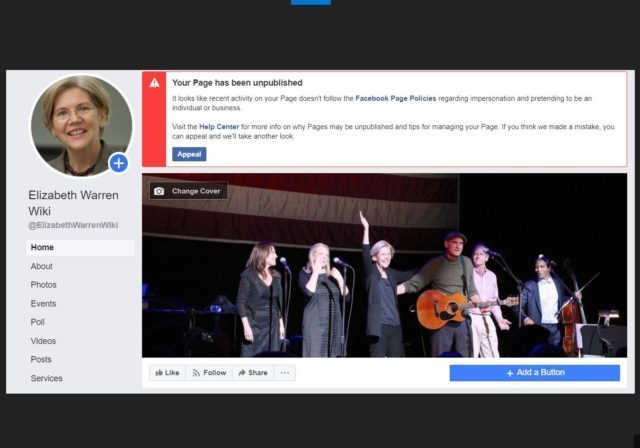 In February 2013, I launched ElizabethWarrenWiki.org to put in one place the wide range of research regarding Elizabeth Warren conducted during her 2012 Senate campaign against Scott Brown.

At about the same time, I launched an Elizabeth Warren Wiki Facebook Page. There have been no problems with or warnings from Facebook with the page.

The mission of the Wiki was:

The goal of this Wiki is to be the most comprehensive repository of information and links regarding Elizabeth Warren, United States Senator from the Commonwealth of Massachusetts.

Content will be added over time, so please check back frequently.

Over time, the Wiki has expanded, and contains what I believe to be the most comprehensive research on the Elizabeth Warren Native American / Cherokee Controversy and many related topics:

The Wiki has received almost 600,000 visits since launch, and has become a go-to source precisely because the research is so well-documented and sourced.

Recently, the Wiki has been at the center of tweets by Bernie supporters questioning whether Warren’s claims as to Native American ancestry and denials over time make her unelectable:

Jesus. @ewarren claimed to be "the first nursing mother to take the New jersey Bar Exam". This was later proved to be false.
I mean, why does she feel she has to keep lying? ALL. THE. TIME.https://t.co/RvfOBmKzZ2

It may be “coincidence” that just after the Wiki received attention in the looming Bernie-Warren battle, Facebook took down the Wiki’s Facebook page (not the Wiki website, which thankfully Facebook does not control) based on a demonstrably false claim that the page violates Facebook’s “impersonation” policy.

Did a Warren supporter complain to Facebook? We don’t know, but based on past Warren supporter harassment of me at work, it wouldn’t surprise me. All I know is that I received a notification from Facebook that the page has been “unpublished”:

Your Page has been unpublished

Visit the Help Center for more info on why Pages may be unpublished and tips for managing your Page. If you think we made a mistake, you can appeal and we’ll take another look. 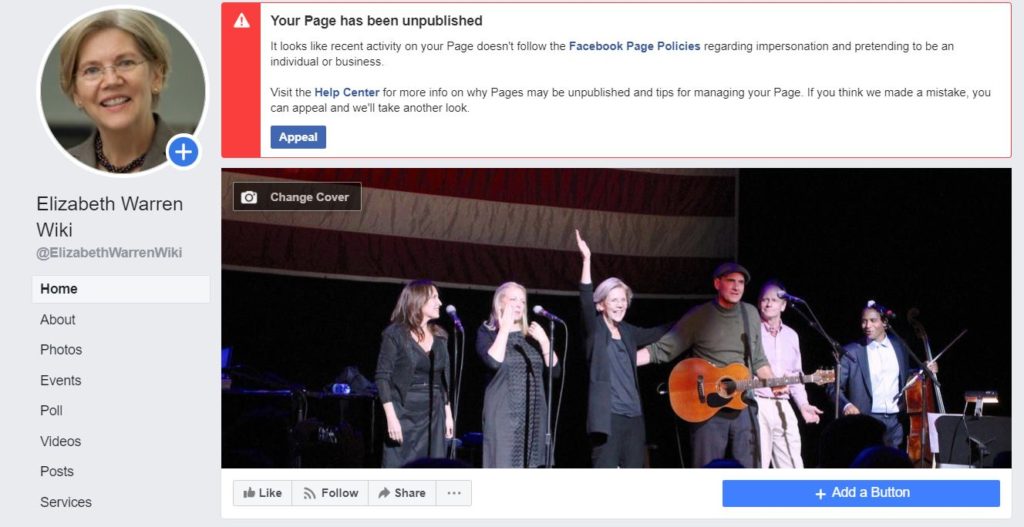 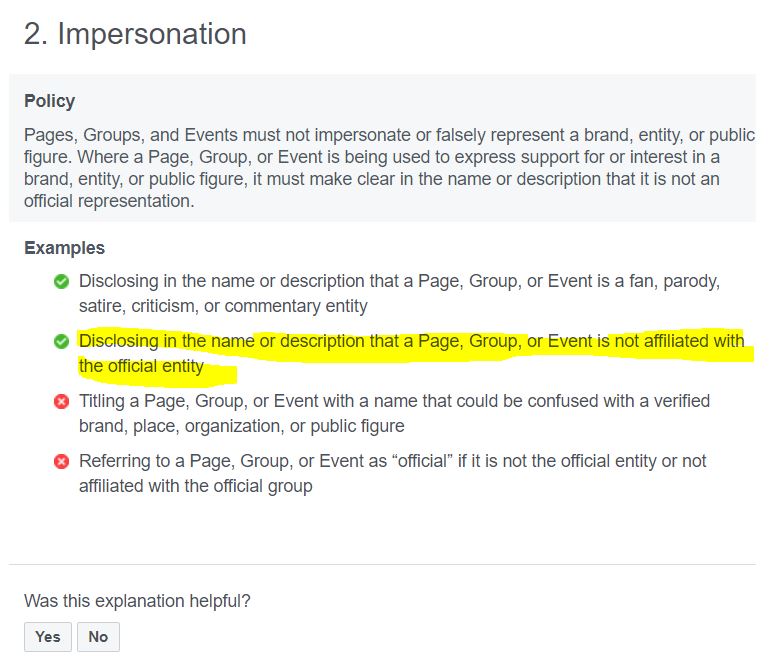 We clearly do not violate this policy. The Wiki page does not purport to “impersonate” Warren — the title of the page specifically has “Wiki” in it indicating it is not purporting to be Elizabeth Warren. Beyond the title, the “About” section makes the following disclosures (which are what the Facebook policy says should be done — see above)(emphasis added):

Elizabeth Warren Wiki’s mission is to be the most comprehensive repository of information and links regarding Elizabeth Warren, United States Senator from the Commonwealth of Massachusetts. This Wiki site is not affiliated with Senator Warren or her campaign.

ElizabethWarrenWiki.org is a comprehensive collection of information and history regarding Elizabeth Warren. We are NOT affiliated with Elizabeth Warren’s Senate office or any of her campaigns.

[Note added: The Mission statement has been live on the page for a long time, the “Our Story” was inputted long ago, but was in draft and just published]

Nonetheless, the page was taken down without warning based on a false claim that it violated Facebook’s Impersonation policy.

We promptly filed an appeal providing all this information.

As of this writing have heard nothing, and the page is not available.

Even if the page gets restored (hopefully someone with sense at Facebook will look at this), the question remains how this happened, and why a Page that is several years old was taken down without warning.

It’s another reminder, as when our YouTube page was taken down without warning, that we can’t rely on big tech.

Every day, I get closer to not minding if our cold civil war turns hot.

…and has become a go-to source precisely because the research is so well-documented and sourced.

There ya go. That’s why they can’t let it stand. What was it Joe Biden said about choosing truth over facts?

Can’t you sue them, Professor?

No, he can’t. Standing is the most obvious reason, there are more.

If you want a legal fix, it has to come from Congress. They could use the Sherman Anti-Trust Act to break up the corporate giants like FB, and they could pass a bill regulating them like a public utility, on a Federal level, and mandate that 1st amendment requirements and restrictions apply to all of their content. (there’s other ways)

Of course the current Congressional leadership has to be tossed before that is possible, and that includes the Corporate Republicans.

Something else to keep in mind that these platforms are willingly dumping a huge market. I know I rarely visit Facebook any longer. Some family members use Messenger and others still post the typical vacation/dinner/friendship comments which I look at every week or two for maybe 10 minutes. This kind of thing just drives more people away.

Most companies prefer to increase their market share, not decrease it. Arrogance like this has always, imho, backfired in the marketplace.

A “demonstrably false claim”? Are we talking about Princess Spreading Bull’s claim that she’s a Native American? Heck she doesn’t even meet the Ivory Soap 99 and 44 one hundredths percent test.

Disqualify “Pocahontas”, from the race! None of the so-called Candidate3s, could even begin to do ‘anything” President TYrump has accomplished…..even in the face of 100% hate filled intentions, of the Demoncrat party, & it’s sorry Ass*d , so called leaders! America, simply does not have a choice politically this next election! So….trump it is, & God bless our President, win in 2020!…….:O}}}}} VIVA AMERICA!

If Facebook went out of business tomorrow, I would throw a party.

So… Facebook is contributing “something of value” to the Warren campaign. Hmmmm…

The term of art is “likelihood of confusion.”
Re-post with the title “PROFESSOR JACOBSON’S resource page of Elizabeth Warren links…”

Fauxahontas and Farcebook can’t have the truth of her appropriating another culture out on the interwebs for all to see.

The *Demoncrat party of today…..is “NOT” the party of our fathers, & Grand Fathers! How sad the realization of “most”, Journalism…..No Integrity, Honor, patriotism, Common sense, or Decency! Just hate filled avarice, & rabid “Get-evenism”! That’s what is the most sad, besides realizing that Democrats, are above the law, if they “can afford it”! Demoncrats, have taken Journalism, Californication, Most all Libretards, with them down the road of criminality, & lack of respect for our Constitution, as well as indifference to God, & Country!

I still find it beyond comprehension that a woman whose entire life, entire career, her every job and position she has occupied, including elective office, has been based on a lie, a lie she willingly and knowingly fabricated, is actually one of the front runners for a nomination to be the President of the United States. After spending her entire life lying to everyone about herself, how can anyone trust her about anything? Are the people of this nation that stupid?

Are you talking about Hillary?

LOL! No, but I think I could write a fair-sized book about Hillary, the single most corrupt, criminal, treasonous, and psychotic individual ever to run for the Presidency. I shudder whenever I think about what this country would be like today had she ever managed to slime her despicable self into the White House.

You answer No to your own question but then c its Hillary’s narrow loss. Yes, they are that stupid.

I answered “no” to the question from Paracelsus.

Actually, yes they are.

Many of them, yes.

I see no reason not to hyperlink the wiki to any FB page which attempts to promote Warren, especially if it promotes disproven items in her history.

Facebook better take down all of Justin Trudeau’s pages then!

No surprises here. Fakebook is as Lefty as they come. I’m surprised your page was up as long as it was. My guess is one of Fauxcahontas’ minions complained thinking it was more ammo for Bernie the Socialist. Never fear, the truth will out, regardless.