Elizabeth Warren raised $24.6 million in 3Q – not the blow out predicted

Elizabeth Warren raised $24.6 million in 3Q – not the blow out predicted

Didn’t match Bernie’s $25.3 million, whose campaign is stuck in neutral, though she did best Biden and Mayor Pete. 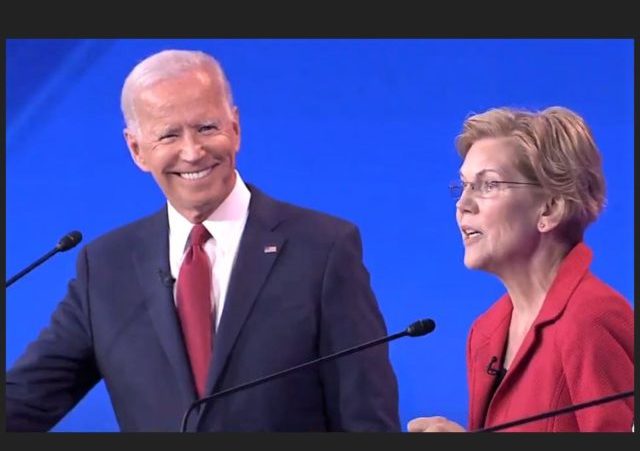 With Elizabeth Warren surging in the polls and becoming the darling of the liberal media, she was expected to have a blow-out Third Quarter fundraising haul. But it didn’t happen.

Warren raised $24.6 million according to an email blast from her campaign. That’s a good showing, but behind Bernie’s $25.3 haul. Considering Bernie’s campaign is stuck in neutral, or even reverse, Warren’s number are disappointing regardless of her campaign’s spin.

This chart shows fundraising momentum, and it looks bad for Biden: 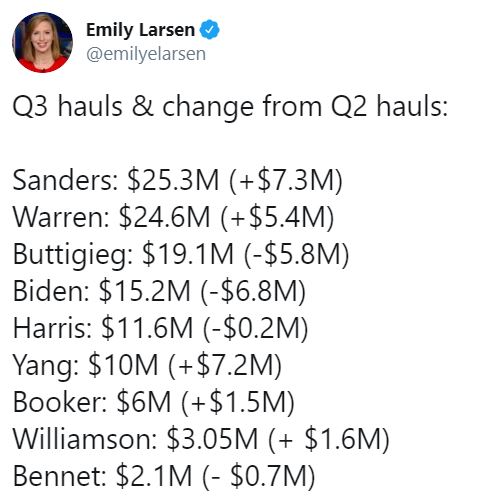 Bernie should have been a big beneficiary of Biden’s troubles, but Bernie’s Heart decided to say “Whoa! Not so fast there, big guy!!!”

It’s almost like there’s some fundamental flaw in taking a 78 year old assisted living patient and putting him under constant stress for months at a time.

I’m going to predict this right now. If Warren becomes the nominee, even if she’s not expected to win or even come close in 2020, the stock market will head down, and continue to head down until election day. She scares the (censored) out of otherwise normal people with sane investment strategies.

notamemberofanyorganizedpolicital in reply to georgfelis. | October 4, 2019 at 2:08 pm

Sure you read last week’s news of big Wall Street investor firms and banks meeting with the DNC and telling them they would not support Warren, and might donate to Trump if she was IT.

“Big multinational interests, Big Pharma, Big Ag, Big Global Banking interests, etc, were exclusively supporting both President Obama and candidate Clinton. The domestic politics of the U.S. were/are tools toward an end; and, so long as the person occupying the oval office did not interfere with Big Club objectives, they too would benefit financially.

The college kid wearing a pink pussy hat is oblivious, but the executive offices of the Deep State FBI, Intelligence Community, DOJ and the power structures within the House and Senate are not; they know. It is the way of the swamp.

Why would a senate candidate spend $10 million to win an election that pays $300k/year? How do politicians become multi-millionaires while in office?

Likely a great many more people are aware of the bigger issues than ever before. Perhaps this explains the dynamic of angst amid those same occupants……”

In 2018, I gave money directly to a variety of Senate and House campaigns. But, I made the mistake of not donating cash to my representative and the D won. I think he felt that he was not going to lose since he didn’t even start the calls, ads and mailers until very late in the general election cycle. It felt like the campaign of the D who lost to AOC in the primaries.

I think there are at least 5 Rs now in the race for the seat. And, I’ve started supporting one of them (Bice – OK5th). I’m also sending support to a senate hopeful in my home state (MI – John James).

It would be nice to know other people to support in key races. Perhaps the Professor can start a series to review candidates for office?

Elizabeth Warren as commander of all our military. Think about that for a while.

I see a big bump in stock of arrow manufacturers.

Has anyone tallied up all the D fundraising and compared it to Trump’s haul so far?

Looks like the Ds (combined) + the DNC roughly tied Trump + the RNC at about $125 million each. It used to be that the Ds didn’t have to raise as much as the Rs because they had the labor unions that supplied a lot of ground troops.

Now that the unions have been decimated, and especially the old CIO unions, it’s different. The old AFL (craft) unions aren’t as reliably in the Ds’ hip pocket, but they’re more prominent in what’s left of the AFL-CIO.

Bottom line is that the Ds need to raise as much money as the Rs nowadays. This will likely doom Warren, because Wall Street has delivered the message to the DNC that a Warren nomination will cut off their money, and redirect it to Trump.

Also, given that the Ds are in their primary season, a lot of that money will be spent quickly, while the Trump + R haul will keep accumulating and likely grow pretty fast as time goes on. I would much rather be in R shoes than D shoes, money-wise.

Wonder if we can troll ol’ Lizzie into talking about this so the media will be forced to cover this racism of antisemitism…..

The Trump administration is threatening to cut funding for a Middle East studies program run by the University of North Carolina and Duke University, arguing that it’s misusing a federal grant to advance “ideological priorities” and unfairly promote “the positive aspects of Islam,” but not of Christianity or Judaism…