#DemDebate: Tulsi Gabbard took down Kamala Harris over false career narratives, will she do the same for Elizabeth Warren?

#DemDebate: Tulsi Gabbard took down Kamala Harris over false career narratives, will she do the same for Elizabeth Warren?

Gabbard is the only Democrat candidate with the guts, smarts, and skill to break the Democrats’ cone of silence about Warren’s Native American and other false personal and career narratives. 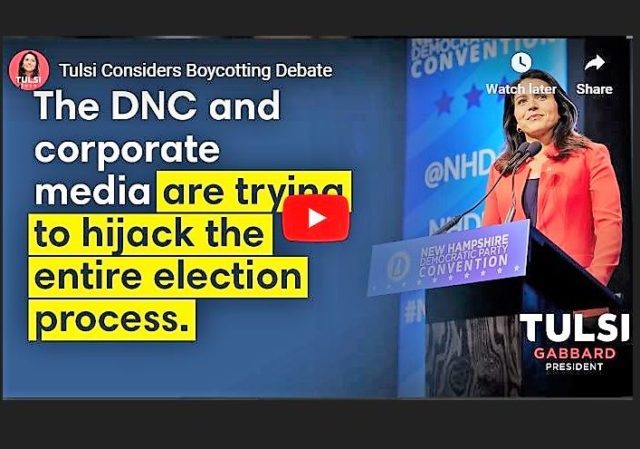 Tulsi Gabbard is probably the only Democrat presidential candidate capable of damaging Elizabeth Warren during the upcoming Democrat Debate.

Absent some effort by Gabbard similar to Gabbard’s campaign-ending take down of Kamala Harris in a prior debate, it appears that Warren has the media backing and momentum to take the prize.

No other Democrat has dared touch the serious problems in Warren’s personal political narrative, much like other candidates stayed away from Harris’ problematic prosecutorial history until this epic exchange:

Gabbard could do the same to Warren in front of a national audience, on a host of issues.

First and foremost, no other candidate has taken on Warren’s decades-long Native American ethnic deception, which was followed by 7 years of obfuscation and prevarication after the 2012 discovery of the cultural misappropriation. In defending herself, Warren even resorted to stereotypes of Native Americans having high cheekbones that would have disqualified any other Democrat candidate.

Add to that Warren’s representation of large corporations against consumers, contrary to her spin, and there is plenty of material for Gabbard to work with.

Gabbard has been complaining that the DNC and corporate media are rigging the primaries by winnowing the field based on polling and fundraising, to the extend that Gabbard threatened to boycott the debate to call attention to the problem:

There is no one who has been a beneficiary of this rigged system more than Warren. She is the current mainstream media darling, as witnessed by the media jumping to Warren’s defense after her narrative of being fired from a teaching job for being pregnant fell apart.

With Bernie having heart problems, and Biden having a Ukraine and China problem, there is a new anointed one: Warren.

The NY Times ran a vicious smear piece on Gabbard, so she must sense that time is running out to right this ship:

As if to prove my point, NYT just published a “greatest hits” smear piece. All your favorite hits in one article! These are the folks who will be acting as the “neutral” questioners/moderators of Tuesday’s debate lol

If Gabbard wants to avoid the rigged primaries she says are happening, she needs to shake up the field much as she did when she took on Harris.

Gabbard has the smarts to do it, and the skill. She is, as I predicted when she first entered the race, the one person who could disrupt the Democrat power structure from rigging the primaries:

If Democrats prevent lesser-known candidates from participating in the debates, it will harken back to Hillary’s friends at the DNC rigging the primaries against Bernie. If all Democrats participate, it’s going to be mayhem on stage, and will take away from top tier candidates.

Add Gabbard to the mix, and it will be great theater. She’s not afraid to go against liberal orthodoxy — not always in good ways — and to attack other Democrats.

So Gabbard getting into the race is important because she will be a disrupter on a stage filled with Democrats before a national TV audience.

After Gabbard’s take down of Harris, we questioned:

Gabbard just took down Kamala Harris over a false career narrative, will she next confront Elizabeth Warren?

Gabbard has the ability. The question is, does she have the will?

She tagged Biden today. A warning shot, in my opinion. To her the evidence of graft and bribery is not “unsubstantiated”.

notamemberofanyorganizedpolicital in reply to puhiawa. | October 14, 2019 at 11:39 am

But remember she is still a radical Dem in donkey clothing.

The DEMS strategy is to run ex-military as moderates, but they would not get anywhere if they Really Were moderates in fact.

[email protected] in reply to notamemberofanyorganizedpolicital. | October 15, 2019 at 5:00 pm

very true, she was quick to slam trump for his actions with the saudis. i believe she equated trump and the u.s. to pimps, and the saudis as prostitutes. (or vice versa)
as an active member of the national guard and an officer her comments should have led to a trial by courts martial.
when she resigns her commission and stops her attempts to ride the fence i may listen to her.

She’d just be leveling the playing field to make space for Hillary, whether she knows it or not.

Any momentum Tulsi got for herself would be swiftly squelched by the Hillary-friendly media, just like last time.

Wake up and smell the coffee, Tulsi dear. You’re being used.

Sore Loser Lady poses no credible threat to Trump. It’s wise to go after the leader, but to discourage doing so out of fear of SLL is foolish or perhaps even subversive. Phony Fauxcahauntas poses a threat, as her ability to rise to the top of the herd despite her lies and shrillness demonstrates.

I think it’s the other way round. Short old shrill Warren is no threat to win the general. Gabbard, appropriately supported and with some cheating, could have a shot in the general, maybe a Gabbard – Buttigieg youth-movement ticket (I don’t think you can have a gay guy whose name begins with “Butt” at the top of the ticket even though he is very smart).

They’ve never held high office, either of them esp. Gabbard, but that’s the advantage. They have few failures to their backgrounds.

Gabbard has absolutely nothing to lose. She will not be permitted to be on the debate stage again. I will tune in Tuesday to see if she goes down fighting.

She’s a smart cookie. Not smart enough to not be a Democrat though.

If Democrats were the least bit smart when facing a puncher like Tulsi, they wouldn’t lead with their chin.

CNN let her ignore the question they asked her and gave her plenty of time to attack Harris. Then they cut off Harris defending herself, and went back to Gabbard to attack some more.

I am glad Harris is gone. But everyone’s got a skeleton in their closet, and Gabbard won’t have a long career if it’s just doing that.

If Gabbard has no skeleton in her closet, nothing to criticize, it’s because she’s never held a senior position before.

I repeat, she’s never held a senior leadership role before.

Don’t count on Harris being gone. Tulsi has been good at poking holes in narratives, but that hasn’t built her a base. With the three main front runners likely to crash and burn, and the remainder of the field being pretty useless, if some consultant who actually knows how to campaign gets ahold of Harris, she could easily fill the void.

Don’t think she would win, but neither would any of the current front runners

No, she hasn’t built a base; however, Harris’ base has eroded because of Gabbard’s words.

She’s a left wing nut job. Just like all the rest

she is pleasant to look at. too attractive to be a dem. however, she’s lived too long in far, far left hawaii. also, i don’t like how she frequently speaks about her “brothers/sisters” in arms. as an active duty officer she wears her service like a shield to deflect criticism of leftist positions.

She and Yang may be the only adults in the room.

Fauxcahontas would be the target, Hidin’ Biden is flaming out, and Bernie doesn’t have the heart for it.

That leaves Lizzie Warren (Tomahawk, gave the party one big talk, when she saw she had a lock, tried to go there but paused to balk).

Isn’t she part of the Squaw-d?

She pretends not to be elite and to fight wall street.

Tulsi – if given even a little opening can take her down.

Yeah he did that awkwardly. That was the end of his presidential ambitions.

Which is a very bad idea, if for no other reason that no changes that big go as planned, and the end result doesn’t work just as planned either.

In fact Yang is the sort of guy we need as an entrepreneur, which he’s been. He has wild ideas, but some of them work, and he has all the right incentives to self-criticize and make sure things work, because the market disciplines him.

Giving one such as him control of the government is a mistake. His best role is in having ideas and getting some of them to actually work, as an entrepreneur, when he can get paid according to his success, and the rest of us are not at risk.

Yang is an interesting guy, and it is good to have a bomb-thrower up in the gallery to stir up debate and introduce new ideas or bring up subjects the gray blob don’t want to talk about.

Having said that, Newt Gingrich was exactly that person for the Republicans, and he was great… until they let him actually start running things. Winston Churchill might arguably be considered the same type; endlessly inventive but only useful in a specific type of situation – and a royal pain in the ass the rest of the time.

So, keep Yang around but never ever considering giving him the keys to …well…anything.

Gingrich was unreliable. He overpromised to the point you thought he was the earlier incarnation of Trump. But when it came time to do something that mattered, he never quite did. Ever. Over and over this happened.

What would Prof. Jacobson respond if I said I thought Gabbard is somewhat anti-semitic? At any rate, she’s criticized our support of Israel.

And what she did there requires chutzpah, but not a level of brains that any of the other candidates lack. She simply took a question about another and (as she does whenever she doesn’t get the question she wants) just pivoted to a planned speech against Harris. Since it was public knowledge, any candidate could have written or had written for them a speech like that.

CNN was in on it. They let her talk and talk and she never got back to what they had asked her, then cut off Harris who was defending herself to let Gabbard attack some more.

Then, she embarrassed the Dem leadership which was all at least publicly supporting the Pelosi impeachment hoax, by giving the very reasonable opinion that the case isn’t made. Yeah she’s right, but very often in life one can know the right answer and also know not to say it. Therefore I think she doomed her chances in the party at that moment (even though a day or two later she joined the party line) and I am glad, because she’s against supporting Israel.

If CNN loves her so much, you should have second and third thoughts about her.

Being critical of Israel does not make one Anti-Semitic.

True, but supporting the dishonest Palestinian narrative of lies when you know better is.

gabbard, as said, really has nothing to lose–for that reason, she’s a genuine threat to warren on the stage–do not believe warren will be satisfied with a vp spot so she’s unlikely to bow to the crone–gabbard’s mission could be to take warren out much the same as she did with harris–then the dems/leftists could point to gabbard as the reason fauxcohontas crashed and burned rather than the real perp, the crone

Anticipating anything useful from a Democrat?

I think somebody is overdue for a reality check.

As awful as her ideas and views are to me, she is the only candidate with even a hint of substance to her.