If you’re going to tiptoe, do it through the tulips. Not around issues like health care. 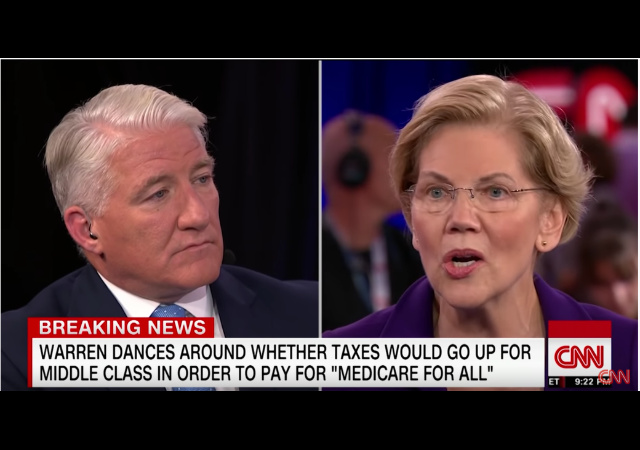 2020 Democratic presidential candidate Sen. Elizabeth Warren (D-MA) will still not admit the middle class will see higher taxes with Medicare for All.

Warren’s arrogance overflows on this subject even after two opponents called her out on the national stage on Tuesday.

South Bend Mayor Pete Buttigieg and Sen. Amy Klobuchar tore into Warren at the debate on Tuesday night when she again dodged the question on how she plans to pay for Medicare for All:

“A yes or no question that didn’t get a yes or no answer,” Buttigieg said. “Look, this is why people here in the Midwest are so frustrated with Washington in general, and Capitol Hill. No plan has been laid out to explain how a multi-trillion-dollar hole in this Medicare for All plan that senator Warren is putting forward.”

“At least Bernie’s being honest here and saying how he’s gonna pay for this and that taxes are going to go up,” she [Klobuchar] said. “I’m sorry Elizabeth, but you’ve not said that, and I think we owe it to the American people to tell them where we’re gonna send the invoice.”

“I appreciate Elizabeth’s work. The difference between a plan and a pipe dream is something that you can actually get done,” she added.

Even last night Sanders admitted it:

After Warren responded by stating Medicare for All is the “way we get health care coverage for every single American,” Bernie Sanders added, “as someone who wrote the damn bill” that “it is appropriate to acknowledge that taxes will go up.”

CNN tried to push an answer out of Warren after the debate. The questioning lasted 20 minutes, but did she cave? Nope!

She wavered a little on Wednesday, but not much. CNN:

Elizabeth Warren’s campaign said on Wednesday that it is studying a range of options for paying for “Medicare for All,” leaving open the possibility that the presidential candidate may ultimately diverge from Sen. Bernie Sanders on how his sweeping health care plan — which Warren has endorsed — would be paid for.

“She’s reviewing the revenue options suggested by the 2016 Bernie campaign along with other revenue options. But she will only support pay-fors that meet the principles she has laid out in multiple debates,” a Warren campaign aide said in a statement provided to CNN.

The campaign aide also said that the total cost of Medicare for All is unknown and that estimates vary by trillions of dollars. They did not provide details on what “other revenue options” the campaign is studying, and declined to comment on whether Warren may eventually put out her own details on paying for Medicare for All.

Sanders has said that his plan would cause taxes to go up on the middle class, but that would replace the healthcare premiums they and their employers pay now under private health insurance. Warren has dodged the tax question in every debate, stressing that “costs” would go down.

Studies have shown Medicare for All would cost $34 trillion in ONE decade. Overall, health spending would go up $59 trillion a year.

I guess since Sanders has said it that’s enough for her?

Warren has released plans of her for different issues, but has not when it comes to health care. She has stuck to Sanders’ plan. She has not said if she would release one of her own either.

Option #1: fire up the presses at the US Treasury.

what could go wrong with that?

After Warren responded by stating Medicare for All is the “way we get health care coverage for every single American…….

but I doubt it.

An excellent follow up question which will never be asked of a candidate by any debate host.

Jugears-care has been nothing short of a debacle. The VA is nothing but a mess. And this ignorant fool wants to force more of the same on everyone? What a stupid, lying bitch.

Dang it all, you can’t talk about a Cherokee princess like that. LOL!!

Warren is a lying fraud with no depth of knowledge in economics or math, what could possibly go wrong?

She doesn’t seem to understand that Medicare actually relies on three insurance plans, two of them private, in order to function properly.

but that would replace the healthcare premiums they and their employers pay now under private health insurance.

But those premiums pay for real insurance, not crapola ol’ Medicare.

A little stroll down Memory Lane . . . President Jefferson was a great enthusiast for replacing the United States Navy, inherited basically from President Adams, with a modest fleet of small gunboats suitable (maybe) for operations on America’s extensive web of bays and rivers. Although the country’s population in those days included a very high percentage of actual seamen, Jefferson’s obvious enthusiasm convinced them to ignore their better professional judgement and go along with his silly plan. Of course he soon found that he had a real war on his hands when the pirates of the Barbary coast became antsy, and the gunboats were useless. By good fortune Jefferson’s navy still had the ferocious Constitution and the Philadelphia, a lovely new frigate donated by the citizens of Pennsylvania, so he sent those and Commodore Edward Preeble to the Mediterranean . . . and the rest is history. The point is, just as there are navies and there are “navies”, there is health care and there is “health care”. Warren’s idea of health care is not only horribly expensive, it isn’t very good (though it’s loads better than going into the VA hospital system).

Your analogy is defective because it is not factual. I’d suggest reading “Dawn like Thunder” by Glenn Thomas.

Don’t think for one second this represents a sudden attack of conscience on the part of the media. The MSM/DNC axis is worried that the proles will get all bent out of shape if their taxes skyrocket. Ballot harvesting and other forms of voting fraud don’t always deliver power to Democrats.

You can keep your plan you can keep your Doctor. It will say you 2500 per year. A Simple question does it help even one American?? Not in your head or in your liberal papa but in real life.

Fauxcahontas is a nefarious parasite who is as warped in her quest for as hillary clinton ever was. She has nothing to contribute to our country but horror.

There was a recent article in the WSJ about the evolution of health care in Great Britain which indicated that the amount of money going into the public sector for “Free” health care was subsiding and the amount of money going into “Private” health care was rising. In other words, their system is evolving into Medicare for all but the wealthy. The wealthy are paying for private insurance and or pay fee service. None of the zombies in the Demorat party will acknowledge this but this is where they are heading. This tells us that since the early 1940’s when public health care was introduced in GB, it has gradually been failing. Canada’s is failing too but the msm will no report on the conditions there. This is how dishonest the candidates in Tuesday’s debate are.

Great observation. That’s exactly what we’re starting to see, here in the U.S., post-Kafkacare (Obamacare) — the rise of so-called “concierge” medicine. These are private doctors’ practices that sell access to more personal and attentive consultations and examinations, for a substantial fee, of course. All of which wouldn’t be necessary, if repeated, heavy-handed, intrusive and cost-increasing interference by the federal government in the health system hadn’t taken place over the last sixty years.

This woman, literally, has no idea what she is saying or doing.

You have to respect the brazen gall and off-the-charts arrogance of these Dhimmi-crat apparatchiks. As befits career politicians who’ve spent scant time in the private sector, and, who’ve never managed a business or drafted a payroll, they think its totally normal to proffer an obscenely profligate centralized planning scheme while omitting those nagging, politically inconvenient little details conceding that such a scheme will inevitably be funded by oppressive, job/prosperity-destroying taxation across all levels of American society.

. . . that such a scheme will inevitably be funded by oppressive, job/prosperity-destroying taxation across all levels of American society.

Who are you kidding here. The poor don’t pay taxes. They take. The rich have enough money to afford private insurance. Don’t think they won’t get that exception in the law and be exempt from participating. So who’s left to pay for the “Medicare for All” program? Why the middle class of course. Lunatics like Liz “Honest Injun” Warren think that the middle class are a bottomless source of money for every insane, lunatic plan the democrats devise. We areb’t. Most of the so-called “middle class” is barely making enough to make ends meet let alone pay all these taxes.