Alinksy Rule for Radicals #4: Make the enemy live up to its own book of rules. 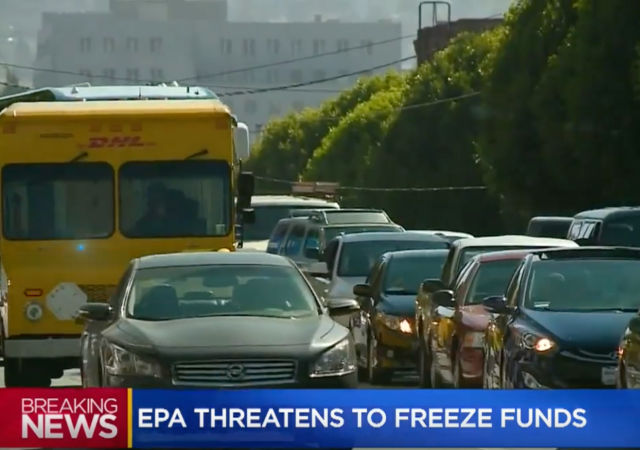 Legal Insurrection readers will recall that President Donald Trump’s administration has become the target of at least 50 lawsuits initiated by California and its Attorney General Xavier Becerra.

Somewhere, Saul Alkinsky is smiling as President Trump applies Rule for Radicals #4: Make the enemy live up to its own book of rules.

The political war between California and the Trump administration escalated Monday with a letter from Andrew Wheeler, the head of the Environmental Protection Agency, warning that Washington would withhold federal highway funds from the state if it did not rapidly address a decades-long backlog of state-level pollution control plans.

The letter is the latest parry between President Trump and the liberal West Coast state that he appears to relish antagonizing. California’s recent actions on clean air and climate change policy have blindsided and enraged him, according to two people familiar with the matter.

While California has angered Mr. Trump with its efforts to adhere to stricter state standards on climate change pollution from vehicles even as Mr. Trump has sought to roll back such standards nationally, Mr. Wheeler’s new letter to the state offers a twist on the narrative.

Wheeler’s wrote a damning assessment of California’s inactions regarding compliance with the Clean Air Act:

“California has the worst air quality in the United States, with 82 nonattainment areas and 34 million people living in areas that do not meet National Ambient Air Quality Standards,” Wheeler wrote.

…Under the Clean Air Act, states that don’t meet federal air quality standards are required to submit “State Implementation Plans.” Wheeler says California represents a disproportionate share of the backlog of such plans.

“Since the 1970s, California has failed to carry out its most basic tasks under the Clean Air Act,” said Wheeler. He then laid out the penalties for failing to meet federal requirements, which include losing federal highway dollars. California is expected to receive about $8 billion in fiscal years 2019 and 2020.

The EPA Chief only learned this summer of a giant backlog of “State Implementation Plans” (SIPs), including more than 130 unprocessed plans from the Golden State.

[Wheeler] was told the backlog resulted from previous administrations’ unwillingness to deny plans from California due to the harsh penalties tied to a failing grade from the EPA.

“When I learned about this a couple months ago, the question I asked the staffer was, ‘why are we holding on to these—why haven’t we acted?'” Wheeler said. “And the response I got back was, ‘we didn’t want to deny them and they couldn’t approve them.’ Well that’s ridiculous to allow 34 million people to live in areas not in compliance with our air standards.”

The agency says the plans it currently has on file from California fail to meet the “minimum threshold of public health protection necessary for approval.” The EPA also says it’s prepared to put together plans for California itself if the state declines to cooperate.

California #Resistance leaders are unhappy with the developments.

“This letter is a threat of pure retaliation,” Gov. Gavin Newsom said in a statement. “The White House has no interest in helping California comply with the Clean Air Act to improve the health and well-being of Californians.”

U.S. Sen. Dianne Feinstein (D-Calif.) called the EPA’s warning letter “the height of hypocrisy,” adding that “California doesn’t need to be lectured by an administration beholden to polluters.”

…”If the White House wants a fight over what what needs to be done to protect our air, we are happy to have that fight any day,” she said.

I might suggest that instead of posturing, drama, and lawsuits, state political leaders follow the advice of citizen activist and city decontamination expert Scott Presler: Stop talking. Start doing.

notamemberofanyorganizedpolicital in reply to rinardman. | September 27, 2019 at 11:42 am

Let the CA CA state get lots more fresh air by having their DEMS walk everywhere.

Would do those Fat Cats good to have to walk everywhere.

So California politicians’ stance is basically “How dare Trump plan to lower the bar on standards which we never had any intention of ever even trying to meet”.

There stance will be that they are covered because they submitted the plans but they are in violation because they don’t have the money to execute those plans. Naturally, it is unconstitutional to ask them to account for where the money they received was spent.

There is never EVER enough money and requiring accountability is an impeachable offense.

$8 billion saved or spent on anything but California is an improvement.

Waiting for the NeverTrumpers take on why this is a bad idea, LOL.

“Waiting for the NeverTrumpers take…”

The EPA also has just warned SF and LA about their human and medical waste on the sidewalks, which goes down the storm sewers and threatened to fine them under the Clean Water Act.

Obama’s EPA was harassing ranchers for building stock ponds away from any “Navigable Water”, but they missed Flint, MI and poisoned two rivers including the Navajo’s water supply.

And Scott Pressler just shamed them by proving that cleaning up the trash is not a matter of money but of WILL.

Pressler and his team received the praise of everyone except the politicians. Even the cops who showed up thanked them and expressed regret that had they announced they were going to do this, the police would have had orders to arrest them.

Somewhere, Saul Alkinsky is smiling as President Trump applies Rule for Radicals #4: Make the enemy live up to its own book of rules.

That’s not a smile, it’s a grimace.

I see your point.

Next we need an investigation of Joe Biden and the possible influence peddling in Ukraine, and all possible crimes discovered during that investigation. I suggest taking the Russia Special Council instructions and a simple cut and paste. Then appoint someone with impeccable credentials, Like Ruddy Giuliani as Special Prosecutor. Then go deep sea fishing.

Perhaps CA regulations were about power and control and not a clean environment? Democrats exploit problems but never solve problems. A solved problem cannot be exploited.

I never thought I would appreciate Alinsky.

notamemberofanyorganizedpolicital in reply to TX-rifraph. | September 27, 2019 at 11:45 am

WHAT??? How do you expect Democrats to become Millionaires without earning a penny of it if they can’t create New and/or Made-up Problems they Never intend to Solve??????

Put’s a smile on my face.

Excellent, now the Administration should proceed in similar fashion with every other perhaps well intentioned but overly intrusive federal regulation. Keep going until the so called progressives that rule these blue states have to argue for the protection of the tenth amendment. Force them to become advocates for a limited federal government or pay the price of their posturing.

“This letter is a threat of pure retaliation,” Gov. Gavin Newsom said in a statement. “The White House has no interest in helping California comply with the Clean Air Act to improve the health and well-being of Californians.”

CARB is a joke. They forced refiners to add MTBE to our gasoline and when that MTBE showed up in state aquifers? CARB sued (and bankrupted) independent gas station operators up and down the state. Things changed only after MTBE was found in Santa Monica’s fresh water wells. We can’t have that.

CARB mandated low sulfur diesel fuel – after testing that fuel mix on exactly one (1) diesel motor. Yeah. I’m not kidding. And when that fuel mix ruined long haul tractor-trailer injector o-rings? They did nothing. When it ruined the o-rings on expensive Mercedes-Benz motors owned by rich people in Hollywood? That’s when CARB took ACTION! and repealed the mandate.

It will be even more interesting and refreshing if they actually go through with it and give CA what it deserves.

Or perhaps more like denying them the funds they do not deserve to steal from us.

If there is any one statement that defines our government bureaucrats it is the one about holding Cali’s SIPs without action it is, ‘we didn’t want to deny them and they couldn’t approve them.’

What this person meant was, ‘we didn’t want to disapprove them since they’re California’s.”

If CA has an air quality problem … I don’t see how rolling their standard back to the federal level is gonna make it any better. OTOH … I guess if people just wanna f*** with CA just for the sake of it … that’s one way to do it.

If the CA standard has a high cost and little effect, then the only logical action is to cancel the CA standard. Solving the air pollution problem is a separate process.

Further, having an ineffective “solution” in place can actually prevent an effective solution from ever being implemented because the clueless think “something is being done” when it is not.