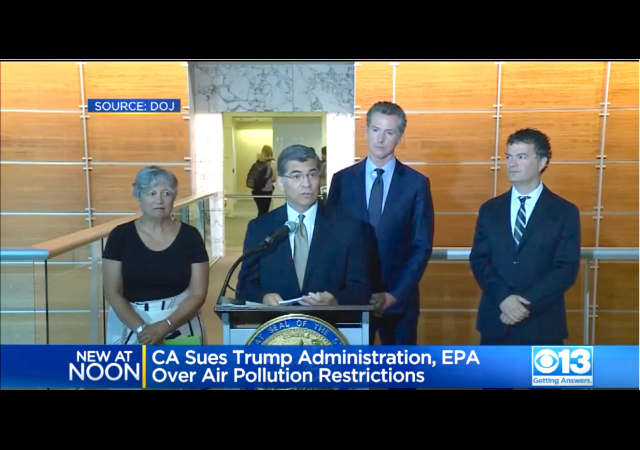 California and a coalition of 21 other states have sued the Trump administration over the decision to rescind restrictions on coal-burning power plants. These restrictions played a crucial part in Obama’s climate change policy.

“The EPA and the Trump administration are backsliding once again, bending over backwards for special interests at the expense of the public’s interest,” Becerra told reporters during a morning press conference in Sacramento. “California doesn’t have time for flimsy fake substitutes to clean power. Our health, our economy, our future as the engine of prosperity and innovation in America are at stake.”

The federal lawsuit was filed in the U.S. Court of Appeals in Washington by the 22-state coalition, with New York taking the lead, as well as major cities that included Los Angeles, New York and Chicago.

This lawsuit represents the latest effort of green justice warriors to cling to Obama’s legacy bitterly.

California has filed more than two dozen challenges to Trump administration policies proposed by the EPA, U.S. Department of the Interior and other federal agencies responsible for setting energy and fuel efficiency standards. The state has prevailed in at least 15 of those lawsuits, and Becerra said he expects to be victorious again challenging Trump’s attempt to roll back restrictions on coal-burning power plants.

“We have confidence not just in the law but that the science and facts are with us on this case,” Becerra said.

However, this isn’t the only lawsuit targeting President Trump’s policies that is in the hopper. San Francisco and Santa Clara counties have just filed a suit Tuesday the new “public charge” rules to restrict legal immigration.

The lawsuit is the first after the Department of Homeland Security’s announcement Monday that it would deny green cards to migrants who use Medicaid, food stamps, housing vouchers or other forms of public assistance.

In their filing, the two counties argued that the rules will worsen the health and well-being of their residents, increase public health risks and financially harm the counties. The rules, they argued, would result in a “chilling effect” in which migrants forgo or disenroll from federal public assistance programs to reduce the risk of green card denial. This would mean that the cost of services would shift from federal to state governments.

And the new proposal for the Endangered Species Act roll-backs was merely hours old before California’s Attorney General was threatening another lawsuit.

California Attorney General Xavier Becerra has threatened to sue the federal government over the changes, while California lawmakers are reaffirming support of legislation to counter the move, at least in the Golden State. Known as the Trump Insurance Law, SB1, if passed, would empower local and state governments in California to maintain federal environmental laws in place before President Trump moved into the White House.

The suite of lawsuits demonstrates that California politicos focus on #Resistance as serious state issues persist.

As a Californian, I only wish our state’s representatives spent as much time, energy, and resources protecting its citizens as they do preserving Obama’s legacy.

Note to California Comrades and District Court Apparatchiks:Federal Regulations are not Laws. They may be changed. To the District Court Apparatchiks, your job is to follow the law as set forth by Congress not set policy. Your job is to be consistent and not use the Administrative Procedures Act as a selective cudgel that applies to Trump and not Obama.

LA Times (behind a firewall unfortunately) had an article the other day that facial recognition mistook 1 out of 5 California lawmakers faces for criminals.
Probably pretty low as it should probably be 4.9 out of 5 in reality.

As if CA would ever build another coal-fired power plant. We are choking in essentially free natgas here and the CA commies want to ban that too.

What is it about On Demand Electric Power that American Communists find so appalling? People lived short desperate lives before electric power and air conditioning. During Hurricane Irma Twelve Elderly People died in their nursing home when the power was out.

The Left sees the death of those 12 as a net gain in their policies.

it’s not a problem: those 12 people are still voting the straight Demonrat ticket every election.

Because wind and solar are the future! (Ask the UK)

Because as any Hawaiian judge will tell you, Obama is still the President.

This BS must end, it is no way to run a country.

Can a court disbar an AG? Because with so many frivolous suits being posted by these AGs, they need to be stripped of their licences to practice law.

“[California is] the engine of prosperity and innovation in America…”

Most likely this is a delaying tactic. based on the Three Great Hopes:

1. We can find an activist judge to rule that what former Pres. Obama could create by executive order cannot be undone by Pres. Trump via executive order.

We need to recognize these tactics as a form of corruption.

Yesterday we drove by the big windmill farm in the CA desert. It was 99F at 11 AM….not a single windmill was spinning. I hope the very first place that is cut off power when the state goes fully green is Sacramento. Yuppp…95F with no AC for weeks on end…

We actually moved out of CA a few years ago. This trip was just a visit. We are thrilled to no longer be CA tax payers without representation.

Windmills have a minimum and a maximum wind speed as well as a minimum and maximum temperature between which they can be operated.

These regions are rather narrow, so they spend a lot of time doing nothing.

The power output of a wind turbine is proportional to the cube of the wind speed. Therefore wind turbines produce most of their power when wind speeds are high (but not too high, of course).

Wind turbines also consume power, to power their electronics and hydraulics. Of course they don’t use the power they generate to do this because that power is not reliable; they use more-reliable grid power for that.

And if you’ve ever seen wind turbines turning slowly when there’s no wind, that’s because some wind turbines must turn all the time to prevent deformation of the main bearings. And (of course) it takes power to do that as well.

Wind power promoters inevitably talk about the gross and not the net power output expected from wind farms, yet even the net power output overstates their benefit as they consume relatively reliable power (from the grid) and produce unreliable, intermittent power when the wind does a Goldilocks (blowing not too fast and not to slow but just right).

I suspect there’d be a lot less support for wind power if more people understood its limitations. In particular, that (due to that cube-of-wind-speed law) it’s very seldom that they produce anywhere near their rated output.

My understanding is that wind generated power is exempt from the reliability regulations that are applied to coal, gas, and nuclear generation. Does anybody here know if that is true?

Also, do the California State offices have backup generators? Photos anyone in Sacramento?

What’s wrong with you? Don’t you like “free” stuff?

Yup. This summer has been really weak for wind, even along the coast. The wind does not always blow.

“As a Californian, I only wish our state’s representatives spent as much time, energy, and resources protecting its citizens as they do preserving Obama’s legacy”

They are telling you via their actions that Obama’s agenda is their agenda. They know their assigned duty. You can deep six the wish.

Why don’t they talk specifically about the changes? Could it be because the changes make sense, and the only way they can maintain support is to make qualitative, unsupported allegations (lie)?

I lived in West Germany during the ’70s. I know what polluting coal-powered plants do to snow. The US never had those problems, and they cleared up the sulfur dioxide and ash long ago.

The regulations for coal-powered plants established long ago cleared up the air so much that the most air pollution found in this country is in the smoky mountains, and it is from the trees.

We do have problems in areas that have frequent inversions, such as LA, but that has nothing to do with coal-fired power plants.

Meanwhile, the entire discussion about coal power has shifted. A perceptive reading at energy.gov shows that our coal power plants are very clean.

The effort to “do something” is directed to a non-pollutant, carbon dioxide.

How much electricity does California import from out of state polluting power plants?

CA actually buys a lot of power from AZ whose major source of power is Palo Verde Nuclear Power Station…LOL….

Has anyone counted how many endangered birds have been killed by the windmills? Or is this classified information?

Turn off all electricity in California not on Federal Reservations. That way Californians can feel good about themselves, help the environment and fact the consequences citizens deserve when they allow saccharine coated tyranny to take root.

I have conducted much of my life with the goal of legally avoiding taxes by buying things in bulk and on sale. Typically I buy stuff at about half the normal retail price, and that increases available after tax dollars and greatly lowers sales taxes.

Alternative energy sources have become viable as part of that strategy. This also means that I have ample supplies if there is a natural disaster or civil unrest.