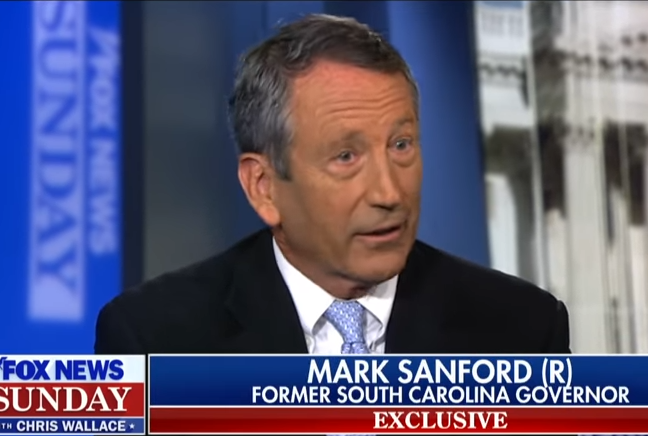 Earlier this year, I blogged that disgraced former South Carolina governor and former Rep. Mark Sanford (R) was considering a primary challenge to President Trump.  For some reason, he’s decided to go through with it and announced his candidacy on Sunday.

“I plan to announce that back home this week.,” Sanford told “Fox News Sunday” host Chris Wallace, adding, “But I am here to tell you now that I am going to get in.”

Sanford is the third Republican to announce a primary challenge to Trump, joining former Rep. Joe Walsh, R-Ill., and former Massachusetts Gov. Bill Weld. Sanford, who had for months been hinting at a presidential bid, said he is going to run “because I think we need to have a conversation on what it means to be a Republican.”

He also claims to be concerned about the growing national debt and deficits.

I am compelled to enter the Presidential Primary as a Republican for several reasons – the most important of which is to further and foster a national debate on our nation's debt, deficits and spending.

Because being made a laughing stock once in your life just whets your appetite for more. Apparently.

The GOP without PDT is DOA.
Some of them are still having trouble understanding this fact.

Some would say: All publicity is good publicity. WRONG!!

Sanford does not appreciate that he is not and can never be Trump.

I live in his district, and I know him pretty well. He‘s an empty-suited idiot, a delusional one at that.

Sanford wants to line his pockets with Never-Trump cash …. maybe he can get another house like Bernie.

Sanford is following the D book. Running to spew anti-Trump crap and collect the dough.

For now, Sanford’s only recommendation is Fauxcahantas.

The Pat Paulsen of the Republican Party.

Sanford and Wells will only serve to make Trump look moral and like a legitimate conservative.

Trump won the 2016 nomination by trouncing 16 Republicans. The Party primary voters were clear: the GOPe isn’t up to the job that needs to be done. And, the national electorate agreed.

I thought he was still hiking in Argentina.

All the Democrats have released videos of themselves dancing. Maybe Sanford we will get a video of Sanford doing the Argentine Tango.

Hard to believe at one point Sanford was considered a Presidential (or Vice Presidential) prospect against Obama in 2008. In the pre-Obama and Tump political era Sanford would have been considered a first-tier candidate, absent the marital issues he had later.

Now he’s just a NeverTrumper. He would rather a [Socialist] Democrat sworn into office in 2021 then preserve a Republican-led executive branch for another 4 years.

What can one say to this babbling buffoon? I’ll try.

“Bring it Bubba! And while you are at it, bring your Bimbo from Buenos Aires!”

Somehow I think his campaign isn’t going to get much traction–but it should yield a few belly laughs.

A lot of men have failed to live up to the expectation that they remain true to a single woman without failing their country.

Trump cheated on all his wives. As far as anyone knows 0bama has never cheated on his. How does your maxim apply to either case?

“Trump cheated on all his wives.”

Maybe. But you don’t know that, you just assume it.

are you sure Barry the Dimwitted never cheated on Michael?

what would call all the alone time he spent/spends with Reggie?

Are you not familiar with Donald Trump’s marital history, or are you implicitly referencing that?

He knows he can’t win, so why run? Someone must be paying him to do it. Even if he siphons a few thousand votes from Trump it could hurt.

Hey, sounds good to me. I just want to know if he’s running for President of Venezuela or Argentina.

Being a Republican means talking big, but producing little. It means not doing anything to curb national debt and spending; during the 8 years of Obama or the 2.5 years of Trump. It means letting the Dems push you around while you ask for more abuse. Luckily, Trump doesn’t take crap from anyone. However, I do wish he would care more about spending and debt. If he can’t or won’t reverse the debt trend, you can be assured no other elected official is ever going to do it either.

No offense, but “disgraced”? He had an affair. Do you know who else did? Trump.

Shut up with the moral supremacy.

Oh, it was so much more than having an affair.

He was the governor of South Carolina, when he disappeared for about a week. One of his staff said he was hiking the “Appalachian trail.” When he returned, it came out that he’d been out of the country, to Buenos Aires, to meet up with his mistress.

For me, this is obviously a man who cannot walk and chew gum at the same time. Some men are apparently able to perform the duties of high public office and have sex, too. This one cannot.

“Disgraced” is the proper term. He didn’t just have an affair, he didn’t just throw his wife and children out in the cold, he lied to the citizens of South Carolina with the cockamamie story he was hiking the Appalachian Trail. Even his own staff didn’t know where he was. The governor of South Carolina and know one can find him for a week.

Hell, “disgraced” is an understatement.

Trump just doesn’t get it. Working his butt off 24/7 to do what he promised his supporters he’d do?! Omigod!

He has it all wrong. What it means to be a Republican is to talk conservative and pretend you’re a conservative, and then backstab their supporters.