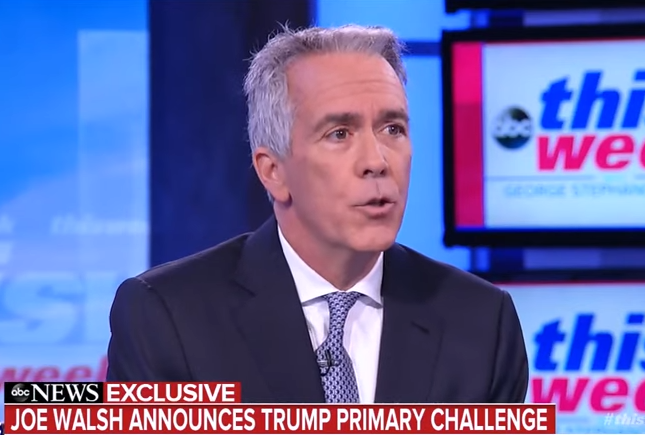 “I’m going to run for president,” Walsh told Stephanopoulos in an exclusive interview.

When Stephanopoulos pointed out the massive uphill climb Walsh has in front of him in the primary thanks to Trump’s overwhelmingly high approval rating within the party, the controversial former congressman argued that conservatives should have an alternative to the president.

“I’m running because he’s unfit; somebody needs to step up and there needs to be an alternative. The country is sick of this guy’s tantrum — he’s a child,” said Walsh, who was elected to the House in the 2010 Tea Party wave, but only served one term before becoming a conservative talk radio host.

Asked if he was okay with weakening Trump politically and contributing to him losing the general election to one of the Democrat commie clown car brigade, Walsh was unequivocal.

Stephanopoulos posed to Walsh that in the past, presidents who’ve faced serious primary challengers tend to be weakened and lose in the general election.

“Are you prepared to take responsibility, if you do well in this, for helping elected a Democrat that some of your viewers and listeners will say, ‘Oh, socialist?'” Stephanopoulos asked.

“It doesn’t matter. Absolutely, I’m going to do whatever I can,” Walsh said on “This Week.” “I don’t want him to win. The country cannot afford to have him win. If I’m not successful, I’m not voting for him.”

The Trump campaign is apparently not impressed and responded to the news with one word: “Whatever.”

So when did somebody decide that “narcissist” would be one of the catch-all calumnies? Do they even know what it means? “Ooohhh, he’s such a narcissist! is apparently supposed to mean something . . . or it might if anybody knew what it meant.

I can’t think of anyone in electoral politics who isn’t a narcissist. That doesn’t mean it’s good or that it’s bad, it means that it’s of no relevance and probably of no interest, either.

Meanwhile, this guy seems as unperceptive as any Liberal. I’m not seeing a notable Conservative intellect there.

Aren’t the majority of politicians narcissistic?

Illinois is a massively corrupt, failing shit-hole state. I consider pols of either party from Illinois ineligible for federal office. If you can’t fix the shit-hole you live in, what makes you think you can accomplish anything (positive) on a national level?

The country is still reeling from the “Chicago way” corruption introduced into Washington DC by that Jug-eared motherfucker. It will take decades to fix. The rest of you just stay away and focus on fixing your own in-state issues.

notamemberofanyorganizedpolicital in reply to tom_swift. | August 26, 2019 at 5:55 pm

Geesh, Tom, Trump’s enemies have been calling him those things non-stop since his escalator ride heard round the world in 2015.

I caught this nuts radio program once, it reminded me more of the racing thought that schizophrenics ramble out when in a full psychotic episode more than anything else.

Another Ben Shapiro NeverTrumper. Who exactly decided that he was a “conservative firebrand”? Is he a shouter or something? I never heard of him.

He has been branded by his master, Bill Kristol. Kinky huh?

You said a mouthful, Phil. ?

notamemberofanyorganizedpolicital in reply to Pasadena Phil. | August 26, 2019 at 5:58 pm

That’s a label of the radical, Dem Leftists.

Study the last many presidential primary cycles and you find the Dems always gush and fawn and fall over themselves in the medial trying to select the GOP presidential candidate.

Then out come their long S.S. knifes……..

These clowns dont care about America. All they care about is maintaining power for the man (whichbis why they are so against Trump…they know he threatens their grasp on power).

These idiots dont care about the normal people and they see no difference between R and D as these morons are all the same.

notamemberofanyorganizedpolicital in reply to mailman. | August 26, 2019 at 6:01 pm

They also see “no difference” in Communist.

In 2012 the NYT had many editorials wishing for an American dictatorship form of government, a Democrat Party one they were hoping for……

Remember Hillary gushing (along with many Hollywood fat cats) about how good Communist China’s government is?

I’m announcing my run for president today. I held off because I didn’t want to be the dumbest sob running against President Trump. Obviously, this roadblock has been removed. LOL! LOL now means Lots of Losers.

“Radio insiders said Walsh’s contract with Salem Media, the owners of his station, runs through 2020. Salem does not subscribe to Nielsen Audio ratings, but the last time they did in 2016 Walsh’s show was tied for 25th place in the afternoon ratings, with a cumulative weekly audience of about 170,000 listeners.”

his arms are too short to box with The G*d Emperor.

Not to mention no wind and a jaw of glass.

RNC needs to tell this idiot right now, you will get no support from us at all. You will not get invited to any GOP sanctioned events. We have our candidate. Period. Trump has 80%+ support right now in party. The idea of a primary contest is insane and clearly just a attempt to seed cable TV shows with BS.

That’s no way to be. Having a couple of challengers will add a little (granted, very little) spice to the convention. Coronations are so dull.

notamemberofanyorganizedpolicital in reply to RobM. | August 26, 2019 at 6:02 pm

I wonder what his commission was to be?

Well. He did a pretty good version of Lif’s Been Good…./

Ultimately, he’ll have to turn his pretty head and walk away …

He wants the title former candidate for president, which the propaganda machine now uses on all those who ran, regardless of how seriously the people took them.

He has zero chance. Maybe it’s to save his radio contract. Maybe he is the narcissist. BTW, the term narcissist has a full definition, Obama was a classic narcissist. Trump is an egotist, not a narcissist. Joe Walsh, yeah, he exhibits signs of being one.

He lost me with his ‘never-trumpness’…

Hey JOE, the alternative was HILLARY… you should be THANKING Pres. Trump DAILY that ‘woman’ lost. USA dodged a huge commie-bullet.

Is Trump perfect? Nope… but his accomplishments DESPITE all the continual MEDIA-BASHING an dhatred-based-on-LIES makes me more PROUD to be a Trump supporter.

Lemme see–the last time Salem radio looked this fellow got a cumulative 170,000 listeners in a week. Well that’s about the total number of votes he’s likely to receive in his “campaign”. It’s a long hill to get to the White House from a 170,000 vote total.

Frankly I never heard of the dude. And that makes me about the same as 99 and 44/100ths percent of the US voting population.

I think the single word response is adequate:
“Whatever”.
Bill Kristol is supporting him, but…
https://bigleaguepolitics.com/new-trump-challenger-joe-walsh-once-told-irrelevant-bill-kristol-to-stay-in-israel/
We used to lock up insane people where they could not hurt themselves or others.
Worse, Kristol said Walsh would stand athwart Trumpism – so the Cuckservative #NeverTrumpers would lose the battle but write “The Conservative case for…”, e.g. Sexual predator list Drag Queen Story and Twerking lesson hour.
If they really wish to stand athwart the Trump Train, I would only encourage shackles so they can’t get out of the way.

The rino race to the bottom. All aboard!

They should run as independents in the OWL Party. Old White Losers! Who? Who?

His only hope is the votes of our enemies the progressive fascists. Their hatred could cause them to change parties so they can vote against Trump.

Joe Walsh and Bill Weld are no threat to Trump.

Trump’s major hurdle to renomination are poll numbers showing him losing to Biden–nationally and in the states. Check out RCP polls. Many of Trump’s policies poll better than he does. Suggesting that another Republican who runs on Trump’s issues (and eventually with Trump’s support) will poll better vs. Biden and other Dems. And will have a better chance than Trump of winning the general election. For example Mike Pence or Nikki Haley or Rick Scott.

“And will have a better chance than Trump of winning the general election. For example Mike Pence or Nikki Haley or Rick Scott.”

LOL, you need to get out of the sun.

The #1 problem for Weld and Walsh is that practically all of their potential voters – the Antifa Left – will be voting in the Democrat primary.

That’s how you throw a career into the toilet.

Fuzzy Slippers & Legalinsurrection get a shout out and get this story put up on the screen in the first few minutes of today’s Dan Bongino Show.

So awesome! Thanks for pointing this out; I looked it up and watched. He’s great!

It’s obvious this man has no concern for this country or its citizens. He doesn’t care if his running for president means that a Democrat wins, and he’s either very ignorant regarding what that would mean or he’s too self-centered to care. Either or both, it’s a deal breaker.