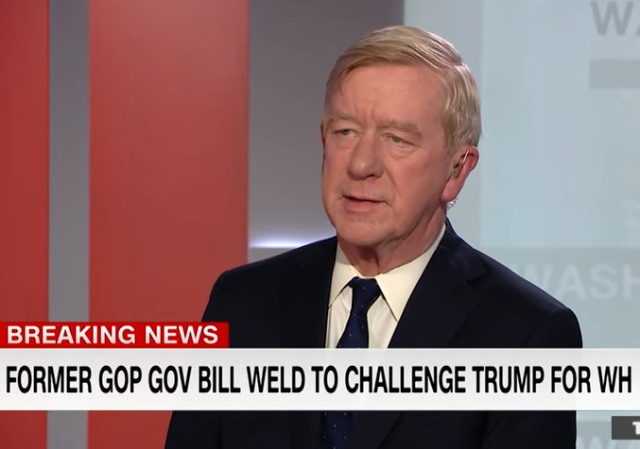 Former Massachusetts Governor Bill Weld ran on the Libertarian ticket in 2016 with former New Mexico Governor Gary Johnson. On Monday afternoon, he announced that he is planning to challenge Trump for the Republican nomination in 2020.

Weld made the announcement on CNN, which is probably no coincidence, and even Jake Tapper questioned why Weld would bother, considering how high Trump’s approval ratings are among Republicans.

“Ours is a nation built on courage, resilience, and independence. In these times of great political strife, when both major parties are entrenched in their ‘win at all cost’ battles, the voices of the American people are being ignored and our nation is suffering,” Weld, who had previously formed an exploratory committee, said in a statement…

Weld told CNN’s Jake Tapper on “The Lead” that it would be a “political tragedy” and he would “fear for the Republic” if the country had six more years of Trump as President.

“I really think if we have six more years of the same stuff we’ve had out of the White House the last two years that would be a political tragedy, and I would fear for the Republic,” he said.

“I would be ashamed of myself if I didn’t raise my hand and run,” he told Tapper…

Trump enjoys a nearly 90% approval rating among Republicans, according to Gallup. When asked about the President’s historically high approval rating and whether Weld believes he can beat him in the primary, Weld said, “Yeah, I do.”

Never-Trumpers and members of the so-called ‘resistance’ must be overjoyed at this news.

In case you have forgotten, just before the 2016 election, when it was clear that he and Johnson had no chance of making an impact on the election, Weld appeared on MSNBC’s Rachel Maddow show to promote Hillary.

Here’s part of what he said, via Real Clear Politics:

MADDOW: I can’t imagine that you wouldn’t tell a person in North Carolina or Ohio to vote for Hillary Clinton if the choice they were making was between giving the Libertarian Party 5% or potentially electing Donald Trump because you guys don’t have a chance against Donald Trump and she does and if they vote for you they would be helping to elect Donald Trump. The Libertarian Party hasn’t treated you great if they’re putting out statements that you disagree with over your name even now, one week before the election I can’t imagine that your loyalty to them is stronger than your fear of Trump as a President.

WELD: Well I’m here vouching for Mrs. Clinton and I think it’s high time somebody did and I’m doing it based on my personal experience with her and I think she deserves to have people vouch for her other than members of the Democratic National Committee so I’m here to do that.

You can watch that interview below:

I’m with Kennedy on this:

This is so true:

@BillKristol will be both campaign manager and the sole donor to this campaign.

1678 – under British Rule, during the Witch Burnings there then.

1991 to 1997. He was very popular despite the R next to his name. While he was a RINO, he looks like Reagan compared to the current crop of RINOs out there including current MA governor Charlie Baker.

Weld resigned in 1997 basically because he was bored and because he wanted his Lt Gov, Paul Cellucci, to be able to run as an incumbent. It worked, Cellucci was elected.

Weld is a bored, old, allegedly alcoholic, extremely wealthy WASP (he can supposedly trace his lineage to the Mayflower and generations of Welds have graduated from Harvard) who loves running for office. He ran against Kerry in 1996 at the height of his popularity here in MA but was defeated as while MA voters can stomach an R Governor they prefer D Senators with Scott Brown being a fleeting exception.

No. He resigned because he wanted to be ambassador to Mexico, but was opposed by Jesse Helms.

He might as well take all the cash he gets to run against Trump and put it in dumpster and light it on fire. Does he not know yet the resistance is futile? (yes I stole that)

Weld’s just using this as another excuse to continue his respectable drinking.

“I just could not show my face at the Country Club if I did not take a stand against Trump and all the low class people he is bringing into Our Republican Party.!

Weld’s problem is that pretty much all of his potential voters will be voting in the Democrat Party primaries and caucuses.

Nevertheless, if he gets even a single vote the MSM/DNC axis will claim the Republican Party is splitting apart. Like today’s release of Mueller’s report, the headlines screaming “RUSSIAN COLLUSION PROVEN!” have ben pre-written.

Fine by me…crap like that can just galvanize the base.

For reference, see all of the Trump has zero chance of winning rhetoric prior to last election. Which party was motivated and which party got apathetic?

MA Republican – a further to the Left version of a Rockefeller Republican.

Guess Weld is over his Libertarian infatuation now? He’s most likely to poll just under Kasick when John gets back in the Republican Presidential Primaries (did he ever leave or will this be just a continuation of his refusal to drop out in 2016?).

As a TRUE (REAL) MASSACHUSETTS REPUBLICAN (Well, a conservative anyway, Bill Weld is just another signal to buy more weapons and ammo.

I didn’t like Trump in 2016 and didn’t vote for him. But I have been surprised by his governance and policies as President. Weld’s challenge is a vanity campaign. He will probably get a few million votes, maybe even win some states, but this NeverTrump crap needs to die. I still don’t like him as a person, but he is a good President.

Weld is not going to win any states,
What are you
Drinking !

Republicans like Weld just don’t understand the major reason that Trump was elected by voters in the primary against other established Republicans was because Trump would do the one thing voters have been begging Republicans to do since George Bush 41.

Fight for what you want.

Trump isn’t perfect but no one can claim that he doesn’t fight. He doesn’t win every fight but he still fights.

The Republican party on the other hand is notorious for saying they are going to fight for X but than putting the tail between the legs and surrendering before the fight even begins.

Do I think Weld would fight like Trump? Nope. And because of that he has zero chance of ever getting by vote.

And way too many Republicans like Weld also refuse to understand that leftism is a threat to America. His support of Hillary in 2016 just confirms that he can not ever be allowed to hold office again.

Weld is not a Republican…he’s an establishment zombie.

In 2016, He was openly calling for “conservatives” to vote Hillary if they won’t vote for his ticket.

Great, another bland Boston WASP coming to the rescue. Just listen to the passion and determination in his voice. He makes Jeb! look like Mr. Excitement. Pass the Grey Poupon!

That guy has never been exciting. Or conservative.

We should start a pool… how is Trump going to brand him?

Then again, he may not even warrant any attention from Trump at this point.

Rags-Rump can join his fan club, and lose with him when Trump wins again.

Every day you post anything about me, you prove you’re an idiot.

Why would I support Weld?

“Why would I support Weld?”

What a lying moron.

Lol – poor Rags! Rags tried to brand PDT with his T-Rump nonsense and it didn’t work in the slightest. Branding takes skill – Donald Trump has it, Rags doesn’t. Weld is a joke.

Another idiot tilting at windmills! Post a link to me saying anything good about Weld. You can’t, of course.

How does outright lying help your man-crush?

The nation is fed up with low value, no vision politicians Massachusetts has put on stage the last 60 years.

While he was Governor here I don’t believe he has lived in MA for years. He is far more of a New Yorker than MA.

Watch what you say about Mitt.

Otter: I think that this situation absolutely requires a really futile and stupid gesture be done on somebody’s part.

Bill Weld: And I’m just the guy to do it!

He might be counting on Dems to vote for him during the primaries because after praising Lying Crooked Hillary no Republican would vote for him.

The problem with that line of thinking is that the Dem primaries, at least the early ones, will be heavily contested.

Weld taught his successor Gov. Romney in Massachusetts everything he knows and now he heroically picks up the mantle of Minnesota’s Harold Stassen.

That’s like comparing Castro with Hitler, Stalin and Mao.

Weld dreaming of numbers that Warren has. Maybe they could have a beer together.

I’m guessing Weld will get somewhere between 5 – 10% of the total Republican primary votes. His voter base will be the never Trumpers.

The #neverTrump cult is nowhere near 5% of Republican voters

Another member of the Party of Convenience.

What’s with people who lost their most recent election wanting to run for president: Robert Francis O’Rourke, perhaps Stacey Abrams and this loon who hasn’t held elective office in 25 years.

Who knew he ‘n his liver were still alive?
Someone squeeze him out of an old bar rag?

I can imagine the elitist Bill Weld in his campaign’s first Instagram post strolling up to the bar at his country club: “Where can I gets me a Cognac?”

The only governor in the history of the United States to appoint an official state astrologer, The Cosmic Muffin. He’s toast. First opponent to mention that in public makes him a laughingstock.

If we call Bill Weld in the original German “Wilhelm Veld”, you get the direction where the RINOs want America to head towards: the Weimar Republic and it’s demise.

Just what we need: another romney.

If you poll the Weld family, my guess is that Weld would lose 20-1. He’s the only one who would vote for himself, assuming he could find his way to the polls. Idiot!!!