The Democrats have grown tired of AOC’s schtick. Will they support Khan? 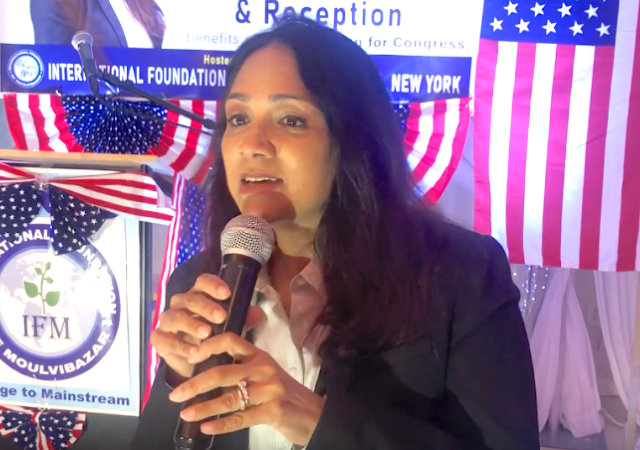 Khan, who filed her candidacy in July, wrote on her website that she “has spent her entire life fighting for justice, equality and fairness in her community.”

Khan, a daughter of Bangali Muslim born immigrants, showcases her accomplishments as a Democrat activist on her website. She serves as president of the Jalalabad Association:

As President, She raised money for the needy and helped alienated Bengali wo-men in the community. She also organized cultural events and encouraged first and second generation Bengalis to learn more about their heritage. Badrun has worked towards political and social empowerment for her community. Her service has gone well beyond the Bengali community. She is an active presence in schools and service to all the residents in her Queens community. She has volunteered and served with honor as a member of Community Board 2. Badrun continues to works diligently each day to help her community and the people of Queens.

She promises to work as a “uniter, someone who hopes to build bridges so that no community, regardless of their ethnicity or religion will ever be left behind.”

Ocasio-Cortez said she “will just focus on delivering for my district and doing the best job.” She does not want “to focus too much on other folks in the field.”

The Hill wrote that Kahn “will face an uphill battle against Ocasio-Cortez, who has shot to national prominence and wields a formidable grassroots following online.”

However, whispers have floated around DC that the Democratic Party has grown tired of Ocasio-Cortez. It may become worse for the freshman since she decided to endorse far-left primary challengers to high-ranking Democratic House members.

The Hill reported in January, just a month and a half after her victory:

At least one House Democrat has been privately urging members of the New York delegation to recruit a local politician from the Bronx or Queens to challenge Ocasio-Cortez.

“What I have recommended to the New York delegation is that you find her a primary opponent and make her a one-term congressperson,” the Democratic lawmaker, who requested anonymity, told The Hill. “You’ve got numerous council people and state legislators who’ve been waiting 20 years for that seat. I’m sure they can find numerous people who want that seat in that district.”

It will be interesting to see how the Democrats handle this election. On the one hand, Ocasio-Cortez has popularity with some in the public. Shutting her down could cause an uproar with some voters. On the other hand, getting rid of her would help mend the schism that has taken over the party.

Down-tick me all you want, but, here goes: do we need another Muslim in the halls of Congress?

it all depends on how ‘religious’ they are – if they are CAIR friendly or realize that in the USA they need to not preach their goospimples or goosesteps.

Pardon my down tick but it is right under the reply area. My observation is that there are no moderate muslims.

A Muslim woman who is not traditional on sexual matters. A female Obama. Why didn’t one of those people in the Republican primary announce here?

You won’t find me downticking ….

United States Constitution Article VI. You might try reading it.

I am well familiar with it. And one thing it isn’t is a quota.

A practicing Muslim believes in the supremacy of the Shariah which is based on their Qur’an. See their book, Reliance of the Traveler, for a full explanation. As a consequence the US Constitution, to the Muslim way of thinking, is inferior both because it’s man-made law and because, perhaps even more egregiously, it was made by non-Muslims, pejoratively called by Muslims using their derogatory word of kafir, to boot.

So how can a Muslim take the Article VI oath of office to support “this Constitution?”

notamemberofanyorganizedpolicital in reply to pfg. | September 19, 2019 at 4:44 pm

And it is the GOAL of every practicing one to make all the non-practicing ones PRACTICE IT of cease to exist in this world….

Everything you said is correct. And these questions – whether the oath of a Muslim means anything, not only for the reason you cited, but also because of the Islamic practice of taqiyya – these questions are going to arise more and more.

Taqiyya is the established Islamic practice that it’s permissible within Islam to lie, especially so when dealing with the kafir, when the purpose of the lying is to advance/protect Islam.

So a Muslim takes the Article VI oath of office, like Carson, like Omar, like Tlaib, like Ellison did when he was in Congress. It means nothing because they don’t mean the oath in the heart where it matters, since their hearts lie with Islam, a point which they tell us over and over.

Similarly, neither a judge nor a jury can be sure, when a Muslims testifies, if the truth is being told. When you as a kafir contract with a Muslim, how can trust the Muslim to do as he/she promises by the terms of the contract?

As noted, these questions will have to be confronted more and more.

An excellent survey of taqiyya is found here,

That trick’s been rebutted already, “Render to Caesar the things that are Caeasar’s…” Ring a bell?

The constitution says Moslems can’t be barred from Congress. It doesn’t say we need them there, or that we must vote for them when they run. Voters are entitled to exercise their prejudices, whether justified or not. So it’s fair to ask the question.

(So are senators voting on confirmations. If DiFi thinks catholics should not be judges, nothing in the constitution requires her to vote for them. And of course the same applies to black candidates and judges, and to voters and senators who are racist, or to Jewish ones and antisemites; the constitution does not require anyone to vote for someone they don’t like, no matter what their reason.)

Given the “impressive” Omar, I don’t. I admit I lack a modicum of trust, seeing the Anti-Semitism from those we have in office, we do not need that to be bolstered.

I wonder, beyond some youth ignorant sheeple, if AOC has the following the media proclaims. With the lies and distortions they keep pumping out I am not as convinced as the media is that she has a huge following, and I can almost guarantee you it isn’t grass roots. Astro-turf at best. It is easy to add phony Twits, (twitter followers) which then causes her name to be pushed more and more to real people.

I’ve believed she could be a flash in the pan, and given her taking on so many establishment Dems, she is lucky she hasn’t run afoul of Hillary.

I don’t know about this woman, but many Bangladeshi’s are very moderate. They have their rabid ones of course, but the country as a whole is a very moderate brand of islam.

Really? We’ve heard of more than one time in Bengladesh (I spell it that way because they’re Bengalis) where they corralled a bunch of people, quizzed them on Islam, and killed the ones that couldn’t do something like quote from the Quran.

Isn’t there a Republican Jamaican-born woman running as well? Strangely, almost no media coverage of her.

They likely see her as a race traitor.

Not 1 but 6 potential opponents to AOC.

I hope AOC kept her mixology book …. maybe they’ll name a drink after her, something like the Bimbo Blast.

None of them are potential opponents, because they’re not running in the only election that matters, the D primary.

The Republicans don’t matter. The general election will be won by the Democratic candidate, so I don’t know why anyone entered the R primary.

You mean, like Mia Love from Utah? Runs as a solid conservative, then once elected, not so much.

I remember the efforts put into her race, and how praised she was. I wasn’t quite so convinced, but was extremely disappointed by the reality of her.

She’s not running in the D primary, so she’s irrelevant. Why would anyone want to read about her?

How many of AOC’s Twits are registered voters in her district? And how many of those will actually get off their asses and vote?

Legally or not, now that she is in office!

Is New York so far gone they can only primary paper Americans? Her priorities are clearly still back home not here.

What on earth are you talking about? Queens is her home. She doesn’t have another, and shows no interest in anything back in her parents’ birth country. How is she less American than you?

She also organized cultural events and encouraged first and second generation Bengalis to learn more about their heritage.

Not exactly encouraging assimilation, there.

So what? Why should they assimilate and forget their heritage? Nobody else is expected to do that. This is America, where we’re each proud of our respective ethnic cultures and celebrate them, and we help other people celebrate theirs too.

Assimilating and “forgetting their heritage” are two entirely different things. The Poles, the Czechs, the Germans, the Italians, et al assimilated. They still celebrate their cultural roots all over the place.

Then they didn’t assimilate. And how’s it different from what you’re complaining of now?

She may be a citizen, she is not an American.

What makes her not an American?

LEARN A LESSON from the past. You’d probably have said the same thing about Omar and Tlaib.

Hopefully her constituents will remember how AOC nearly singlehandedly browbeat Amazon into taking 25000 jobs elsewhere. She cost NY billions of dollars with her stupidity.

Her antics at the border that violated civil rights, and endangered American and alien lives, was a teachable moment.

We’d better hope and pray that the Republican will win.

That would be a prayer in vain. There is no possibility whatsoever for a R to win that district. Not even if the D vote is split between two candidates. The only election that matters is the D primary, which is why this challenger is news and all the R “candidates” are not.

She is wearing wedding rings. How many other women does she share her husband with and does she take orders from him??? A vote for her is a vote for him.

Bad Run Con is a perfect name for any politician! That’s punny!

Islam on the move!!

“She promises to work as a “uniter, someone who hopes to build bridges so that no community, regardless of their ethnicity or religion will ever be left behind.”

She could end up being not only no better than AOC but actually worse. As long as that District keeps voting for people like her and AOC, it will get what it deserves. Unfortunately, the rest of us will have to put up with them in Congress.