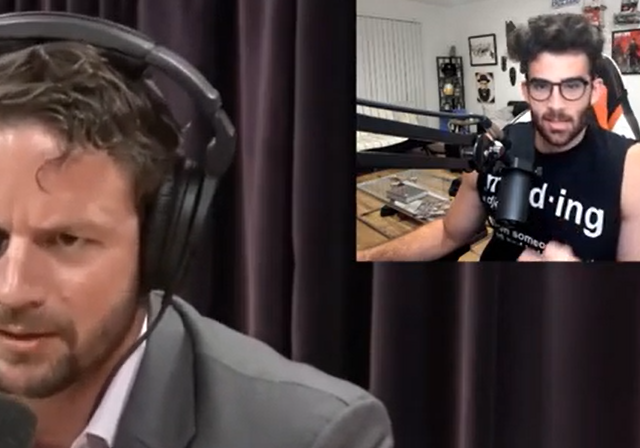 Hasan Piker, Young Turks host and nephew of Cenk Uger, has been taking heat since Wednesday for saying castigating the United States deserved the 9/11 terrorist attacks. He also mocked the injuries Texas Rep. Dan Crenshaw received while serving in Afghanistan.

Crenshaw appeared on Joe Rogan’s podcast The Joe Rogan Experience this week for a two and a half-hour discussion. The podcast has since accrued 1.3 million views since it became available to the public.

The appearance on the show, while a fun surprise, isn’t huge news. Presidential candidates Bernie Sanders, Andrew Yang, and Tulsi Gabbard have made appearances on his show. Almost every tech-literate politician, pundit, or social media influencer will likely end up on his show eventually.

Crenshaw’s appearance perturbed the young host at The Young Turks enough to do a live commentary over the podcast on Twitch. It has gone viral and accrued a backlash due to some unpleasant comments against Representative Crenshaw.

As reported by The Daily Wire,

“This guy has the understanding of foreign policy of, like, a 12-year-old. What the f***. What the f*** is wrong with this dude? Didn’t he go to war and like literally lose his eye because some mujahideen — a brave f***ing soldier — f***ed his eye hole with their d***?” Piker said, during a Twitch livestream on Tuesday night.

Hasan Piker of the Young Turks:

Since the rant has gone viral, Hasan has only doubled down on his statements regarding 9/11 and Dan Crenshaw, additionally throwing in rants accusing Rep. Crenshaw of benefitting from gerrymandering for good measure.

americas foreign policy decisions has lead to 911. this would’ve been a controversial thing to say in 2001. stop being a fucking idiot.

we supplied arms to and trained bin laden. we destabilized the region long before 911. and now we’re stuck in perpetual war, which dan crenshaw was trying to justify in that clip. it’s exactly this kind of attitude that has sent thousands of young men and women overseas to die.

i don't think anyone deserves extra respect when they advocate for senseless wars that send thousands of our young men and women overseas for the profits of the military industrial complex. would love for you to change my mind on this https://t.co/TcybkDH2KE

Let’s set aside the fact that gerrymandering is a bi-partisan sin that the left is rather cynically accusing the right of benefitting from at the moment (I live in Illinois, we’re extremely gerrymandered and we definitely aren’t a red state). It’s one thing to criticize American involvement in the Middle East as many on both sides have done. It’s another to state unrepentantly that the death of 3,000 American civilians was justified or deserved.

Some vocal conservatives on the right have gone as far as to call for Hasan to be fired from The Young Turks. While I don’t suspect his network will succumb to the demand (they’re extremely far-left and likely agree with much of his analysis), his firing shouldn’t be encouraged. Conservatives shouldn’t join the dogpile that is Cancel Culture that has affected so many on our side. Hasan’s well within his rights to be loud, furious, and asinine.

As is his tendency, Rep. Crenshaw remains the better man. He offered a cool-headed and unscathed jab at Hasan for his comments.

Spoken like a real American you haters. If he’s just as a legitimate American as George Washington then his opinions are just as American.

Until you can wrap your head around the fact that we have a broken immigration system and we shouldn’t allow immigrants to vote for at least three generations. You’re going to be shocked at stories like this. Sure, get all indignant then realize we have no way to send them back.

I used to not believe that. I used to say that our immigration system worked fine, we just needed the people with the balls to enforce it.

Now, I do agree it’s ‘broken’, but not in the way you might think. Our immigration system was not designed for millions of Mexican and Central Americans poring across our southern border. We need to end all immigration for 60+ years, legal and otherwise. Say ‘no’ to Birthright Citizenship, they must go back. We need to say ‘no’ to all claims of asylum. Economic claims are not valid. We need to stop all this ‘family’ type immigration. We need to stop H-1B visas. We need the time to allow everyone who is here now to assimilate to our system.

If we could do these things, then I wouldn’t want a constitutional amendment to eliminate islamists from practicing islam. Follow a psychopath, act like a psychopath.

You have no idea of the many ways in which I see our system is broken. I do however agree with you on all the points you state except one. We have well over 300 million in the US. We need zero additional immigration ever.

it is not a broken immigration system. it is the colonization system created by the republican and democrat parties to make white people a minority so a majority of the people will vote for communism just like Venezuela and el Salvador. dictatorship may be bad for the people but it is great for the ruling class.

Proponents of unrestrained immigration say it’s not an “invasion.” Yet there are 13 million illegal aliens in this country, while Germany invaded France (in 1940) with just 3.3 million men. They didn’t do that to make France more French, they did that to gain control over France. Four times as many illegal migrants are in this country, many with no intent to assimilate, and it’s not an invasion?

sorry, downvoted bc I didn’t read carefully. Meant to upvote.

The mask is off. democrats want a recession. They want open borders and to abolish ICE. They want to give free healthcare to illegal aliens. They have violent anti-Semites in leadership positions in congress, and respond to anti-Semitism with “meh.” They wish death on people they don’t agree with.

This is going to get worse before it gets better, but I hope they keep showing America who they really are.

I’m unsure it’s going to get worse before it gets better. The russia hoax is dead beyond revival, and now Trump can do somethings without that hanging over his head.

The Democrats rigged the Election and then they lost it.

Then, they rigged the Russia Investigation and they lost that too.

Democrats are losers on a scale we have never seen before in the history of the USA.

notamemberofanyorganizedpolicital in reply to MattMusson. | August 24, 2019 at 1:05 pm

Democrats, like Communist, can not win unless they cheat.

The Young Turks are the creepiest Muslim sympathizers, America hating media accepted by conventional Americans. The foul-mouthed provocations and declarations run between juvenile and the realization that they despise America, white people, conservatives of any stripe, and see liberals as nothing but a gateway for some bizarre amalgamation of Islam and socialism.
When I wish to cheer up, I watch their reaction on election night, 2016. Available on a Bing search by reference.

Remember, they are behind the radical Justice Democrats who gave us “The Squad”.

notamemberofanyorganizedpolicital in reply to MattMusson. | August 24, 2019 at 1:04 pm

Because they are Communist and Communist Chinese “owned.”

No wonder conservatives win nothing the ratchet turns one way always to the left. You believe the rules arefair? You actually think that there is even a ‘playing field’ and that it should be ‘level’? There’s no field. It’s a parade ground where the enemy gets to march, demonstrate, hold revivals and ceremonies and conservatives get to watch or maybe disrupt proceedings from time to time. Occasionally they let conservatives on the field to play ‘keep away’. The very fact Trump won despite</b≥ everything principled conservatives did to join hands with the left and stop the real spoiler should be evidence enough for anyone.

Exactly the reason why free expression, and free response to that expression, is so important, even for those whose ideas we find disturbing or dangerous. Especially those.

Always interesting to me that the individuals who advocate that America as whole is deserving of punishment for whatever particular ‘sin’ of the day never seem to voluntarily get on a flight to a location filled with folks who would be delighted to assist them with martyrdom.

Lock Piker in a room with Crenshaw for a couple minutes.

Now we know what his uncle Cenk Uygur really think but dances around saying.

Why do people watch that garbage?

It’s good that the “garbage” is now on public display. Some of us have for decades been telling others this is the true face of “liberals” and have been met with disbelief and jeers. Everyone is now able to see for themselves what liberals have been thinking and working towards all along.

The disturbing question is why are they “coming out” now? Ten or twenty years ago, to come out like this would have been political suicide, and liberals understood that. Today they believe the American public is ready to accept and agree with such rhetoric. If they’re wrong, it’s because they played their hand a presidential election cycle or two too soon. Let’s hope that they have. (I believe Nancy Pelosi is not upset with The Squad because of what they’re saying; she’s upset that they have said it too soon.)

I looked into this guy once these comments came to light. As far as I can tell the only thing he has ever done is run his mouth, displayed a rather unfortunate style in clothing, and suck off of his uncles teet.

The name pattern H-ss-n, Hassan, Hussein, Hossin, etc is used to indicate that a male child is Muslim.

what an appropriate name for such a pathetic POS like this dirt bag.

a soyboy’s futile attempts to criticize a real warrior

It’s incredible how dhimmi, useful idiot Leftists and their goose-stepping, Muslim supremacist bedfellows manage to consistently blame the U.S., Israel and the west in general, for everything, while absolving totalitarian ideologies (e.g., “Submission;” communism) and their adherents of any blame for anything.

One must ask at what point do Leftists believe that intrinsically evil ideologies actually deserve to be subjected to condemnation and criticism?

“One must ask at what point do Leftists believe that intrinsically evil ideologies actually deserve to be subjected to condemnation and criticism?”

The answer: Leftists are “evil ideologies”.

So the answer to the question is “Never.”

Another crazy “immigrant” or child of one.

Close the gates, lock them, and start kicking these people out.

If our law doesn’t allow it, change the damn law.

Enough of this being insulted IN OUR OWN COUNTRY.

We need some non-party elected officials who care more about the country than getting re-elected, to set this right. I wish more nonpoliticians would run. Lawyers, yes, politicians, no.

Why lawyers? Because Trump would never have swallowed that swill from Barr about “never a plan to tell the judges to kiss my ass” over the refusal to allow the citizenship question on the census. A lawyer is more likely to have a clue about the underpinnings of these concepts and not feel impelled to rely upon Barr’s advice.

notamemberofanyorganizedpolicital in reply to gonzotx. | August 24, 2019 at 12:59 pm

That radical group and Pasan Hiker are so UN-educated!!!!!

Everyone knows you spell the name of their group
with “D,” not “K.”

If Piker is an American, then he’s saying that he deserved to die in the 9/11 attacks. Being woke today would not have excused him from death on that day, had he been in the wrong place. But I don’t think he’s thought that through.