At the moment, it’s extremely difficult to produce a film about anything regarding Nazism without the director falling into Trump-Derangement-Syndrome. 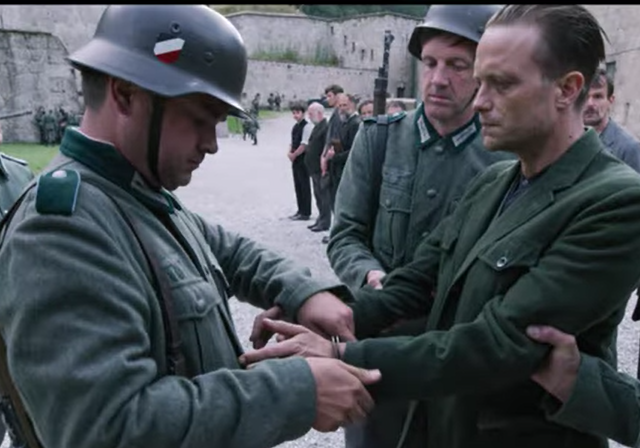 A new trailer dropped this past Tuesday for the highly anticipated release of Terrence Malick’s ninth film A Hidden Life.

The legendary director of filmic masterpieces like The Thin Red Line and The Tree of Life is this time bringing to life to story of Franz Jägerstätter, an Austrian contentious objector and a Catholic who refused to serve in the German army and was executed by the Nazis. For this he was declared a martyr by the Catholic church.

The film received immense praise during its brief run in the film festival circuit and is set for a December 13th release where it’s likely to be an Oscar contender. As a fan of film, I’m extremely excited for the movie with some reservations.

At the moment, it’s extremely difficult to produce a film about anything regarding Nazism without the director falling into Trump-Derangement-Syndrome. On its face, it’s possible the film could become an annoying cudgel for the left to beat the right with yet again with long essays about the topicality of one man’s stand against the rising “Nazis.”

At a time when the far-left is advocating for BDS against Israel and when Democrat congresswomen like Ilhan Omar use anti-Semitic dog whistles to criticize AIPAC, it’s mildly hypocritically to claim the right is the only side of the aisle worth scrutinizing as “Nazis”.

Film is always influenced by the culture that surrounds it and it speaks to zeitgeist that it’s formed in. This is why Hollywood, the most progressive place in the country outside of Yale, is producing so many movies now about racism and Nazism.

When one of the most important directors in cinematic history is releasing a hotly anticipated Oscar contending movie about one man’s resistance against the rise of Nazism, it’s worth taking a second look at.

Is A Hidden Life Terrence Malick’s ode to the resistance and Antifa? Nobody knows for sure. The infamously reserved director hasn’t given a public interview since the 1970s. If he is mad about Trump he isn’t likely going to speak publicly about it.

Generally his films are more concerned with headier, existential conflicts above the riff raff of contemporary politics. He’s a quasi-religious poet, not a pundit. It’s easy to assume the movie is more interested in the internal struggle of its central character’s faith than it is in Trump.

Regardless, film is a medium defined by its place in the moment. When directors make films like Hidden Figures, The Shape of Water or The Hateful Eight, they aren’t just excoriating our ancestors for their failures. They’re trying to highlight perceived modern issues.

In the trailer one of the quotes we hear says,

“What’s happened to our country? We’re killing innocent people, raiding other countries, preying on the weak. If our leaders, if they’re evil, what does one do?”

Owen Gleiberman, a critic for Variety who caught the film at the Cannes Film Festival, wrote:

“In tracing Franz’s journey, Malick has told a story of a dialogue with God that is also a drama of the most searing and deliberate topicality. It says: If we don’t have people who can draw that line in the sand, by doing it within their own hearts, then our civilization will not stand.”

Considering Mr. Gleiberman’s quote shows up in the trailer, it’s fair to say the film’s distributors agreed with his analysis.

In light of recent positive media portrayals of Antifa, AOC declaring that the US is operating concentration camps on the border with Mexico and the subsequent terrorist attack against an ICE facility, it’s hard not to argue that arguments about common people’s “resistance” aren’t in some way justifying leftist political violence.

At the same time though I’m not overly concerned about this film. Taken out of context, there’s certainly nothing wrong with giving the Nazi’s another well deserved wallop. The film’s central conflict as portrayed by the trailers suggests the central conflict of the film is man’s inner responsibility to live out the will of God in a life or death situation. That in itself is interesting and sells the film for me in a huge way much in the same way Martin Scorsese’s masterpiece Silence did.

Overall, I’m not terribly concerned the film will be some sort of aggressively anti-conservative tract. It’ll probably have too much on its mind regarding more interesting topics. It’s likely the progressive film press will overindulge as per usual but that’s not surprising at this point.

In general, I stopped buying movie tickets around 2 decades ago. I just don’t want to fund the leftist hollyweird sewer

If it’s not an indie pic with a Christian message, or a B&W re-rerun on TCM, I ain’t intetested.

yeah, we stopped going to movies awhile back. last one we paid to see was Gran Torino.

Hollywood hates me, and they make garbage.

add in the hassle of LA traffic, long walks from the parking area to the theaters, $30-40 for two adult tickets, and another $20-30 for two small sodas and a matching popcorn, then to be packed into a room full of unattended children, teenagers and other immature children of various chronological ages with cell phones, conversations, etc, on top of a stupid preachy movie, and it’s no wonder we stay home.

so yeah, no chance i’ll bother to go see this pile of dreck

Was looking forward to “Joker,” but found out Robert DeNiro is in it. Won’t be seeing it. These days I wait a few years and then pick up a used Blu-ray of something I wouldn’t see in the theaters. That way I can watch the movie knowing that none of my money supported it. That is, if I can stand watching some of the people who might be in it that I know hate me. DeNiro might prevent me from watching “Joker” at any time.

They keep digging a deeper hole.

The way around this is to simply boycott ALL hollywood products (tv, movies, books, magazines, etc.)

notamemberofanyorganizedpolicital in reply to TheFineReport.com. | August 14, 2019 at 8:58 pm

The time is ripe to tear down Hollywood – literally.

I’m waiting for the first film to use all CGI “human stars” through licensing the image of say Cary Grant and Doris Day, or of the Marx Brothers.

That would drop production cost through the basement floor.

Ouch, Tyler – please drop the incorrect apostrophe in your title – should be “its.”

Don’t be so contentious. I’m sure the editors are conscientious.

I see what you did there. Apparently the hint was not taken.

I’m sure that the media will try to twist the meaning of the film to benefit democrats and hurt republicans. What’s new about that? I’ll watch it after it hits redbox for sure.

BTW: When it comes to Catholics and NAZI’s the left always rage about Pope Pius XII. But there’s a wicket to unstick now – Pope Francis is the left’s love idol – and they don’t dare savage the Pope. Do they?

PS: the film looks like it was shot in the Alps – a very “Sound of Music” aspect to it.

It’s easy enough to find current-day analogies to the Nazis and their fellow-traveling communists in today’s United States. A certain famous rabbi had advice for this endeavor. He said, “by their fruits (actions) shall you know them.”

So, is there a party that hates Jews? One that advocates violence against our own citizens? One that engages in propaganda? One that wants to disarm law-abiding people? One that refuses to tolerate dissent? One that physically punishes people for being in the wrong group? One that knowingly engages in violence for the purpose of blaming others?

We, right now, have a national political party doing exactly these things, and the people here can name the ones who have done each of them.

Like Lindsey Graham, I sure hope they don’t get into power.

We now witness the moral bankruptcy and hypocrisy of contemporary Leftists/Dhimmi-crats, inasmuch as they are happy to flippantly exploit and trivialize Jewish suffering under the Nazis, by invoking grossly offensive, inapposite and fallacious analogies with which to attack American conservatives.

But, when it comes to actually evincing support for Jews and for Israel, the Dhimmi-crats are nowhere to be found — except, of course, staunchly defending the vile Jew-haters, Israel-vilifiers and Islamic supremacism-collaborators/whitewashers and rationalizers in their midst, whether it be black Jew-haters such as Farrakhan and Sharpton, or, Muslim-chic, victim-posturing Jew-haters, such as the odious Keith “Hakim” Ellison, Rashida Tlaib and Ilhan Omar.

Jews are useful to Dhimmi-crats only as a political prop.

You misspelled his name. Second, whether he’s a “legendary director of masterpieces” is entirely subjective. One could with equal justification assert that his movies are visually lovely but boring abstractions of dubious narrative coherence. Third, the Left’s double-standard with respect to anti-Semitism and Nazi-like behavior is not “mildly hypocritical.”

Malick is a super-annuated hippie whose political mind is a petrified relic from the 60s. His last three movies bombed. Despite a line-up of A-list actors any producer/director would be slavering to enlist, each was a massive box-office flop. I can’t imagine that anybody outside fanboys and a smattering of leftist critics and Never-Trumpers eager to devour any oblique reference to “literally Hitler” Trump is “very excited” to see this movie.

Haha. Couple grammar Nazis commenting on title of article of a film about Nazis.

I don’t see any irony.

This is a blog run by lawyers, with comments populated by lawyers. There will be a concern for good grammar and clarity. Many lawyers are meticulous writers.

I still want an edit button, especially with the instability of the web pages and autocorrect. My own mistakes are bad enough, but having some pinhead’s idea of a correction for the words I use is beyond irritating.

The movie “The Thin Red Line” is a masterpiece? Taste in art and entertainment is highly subjective.

When you are criticizing someone, it is not necessary to build them up or aggrandize them by calling them “Legendary” in the title. Minimizing them is a better rhetorical device.

liberals always say they dislike trump because he is a Nazi, which is of course is not true. but they love George soros who actually was a Nazi. how can anybody that likes communism dislike Nazism?

Cognitive dissonance: When you think the leader of your country is a Nazi, but you want the government to take everyone’s guns.