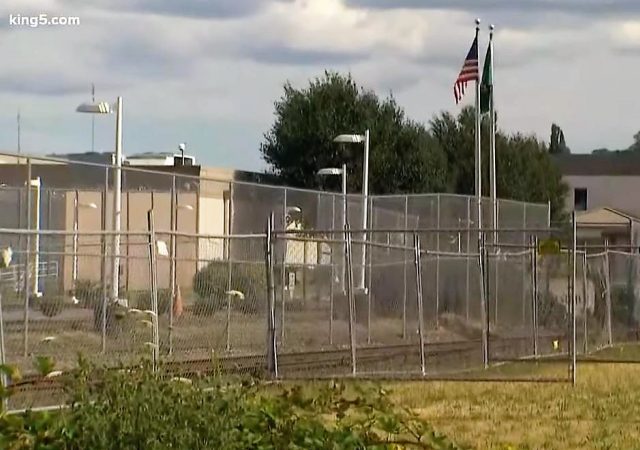 As Professor Jacobson blogged Saturday, “Willem Van Spronsen, 69, of Vashon Island, Washington, attacked an ICE Detention Center in Tacoma earlier today with incendiary devices and while armed with a rifle. He was killed in a shootout with police.”

Sunday evening, the Antifa site ItsGoingDown published Van Spronsen’s manifesto, portraying him as a martyr for the cause.

The screed is lengthy, dramatic and disjointed, but the bits seized upon because of their connection to other individuals include the reference to detention centers as “concentration camps,” a comparison that landed AOC in hot water with anyone who has read a history book and his suggestions that his “comrades” arm themselves for the coming revolution.

When I was a boy, in post-war Holland, later France, my head was filled with stories of the rise of fascism in the ’30s. I promised myself that I would not be one of those who stands by as neighbors are torn from their homes and imprisoned for somehow being perceived as lesser.
You don’t have to burn the motherfucker down, but are you going to just stand by?

This is the test of our fundamental belief in real freedom and our responsibility to each other.
This is a call to patriots, too, to stand against this travesty against everything that you hold sacred. I know you. I know that in your hearts, you see the dishonor in these camps. It’s time for you, too, to stand up to the money pulling the strings of every goddamn puppet pretending to represent us.

I’m a man who loves you all and this spinning ball so much that I’m going to fulfill my childhood promise to myself to be noble.

Here it is, in these corporate for profit concentration camps.
Here it is, in Brown and non-conforming folks afraid to show their faces for fear of the police/migra/Proud Boys/the boss/beckies…
Here it is, a planet almost used up by the market’s greed.

I’m a black and white thinker.
Detention camps are an abomination.
I’m not standing by.
I really shouldn’t have to say any more than this.

I set aside my broken heart and I heal the only way I know how—by being useful.
I efficiently compartmentalize my pain…
And I joyfully go about this work.
(To those burdened with the wreckage from my actions, I hope that you will make the best use of that burden.)

To my comrades:
I regret that I will miss the rest of the revolution.
Thank you for the honor of having me in your midst.

Giving me space to be useful, to feel that I was fulfilling my ideals, has been the spiritual pinnacle of my life.

Doing what I can to help defend my precious and wondrous people is an experience too rich to describe.

My trans comrades have transformed me, solidifying my conviction that we will be guided to a dreamed-of future by those most marginalized among us today. I have dreamed it so clearly that I have no regret for not seeing how it turns out. Thank you for bringing me so far along.

I am antifa. I stand with comrades around the world who act from the love of life in every permutation. Comrades who understand that freedom means real freedom for all and a life worth living.

Keep the faith!
All power to the people!
Bella ciao.

Indeed the Democrat Party has an armed wing: Antifa.

No, these people think the Democrats are just as right-wing as the Republicans.

Antifa is a wholly owned subsidiary of the democrat party.

No, it is not. Antifa despises the Democratic Party almost as much, if not more than, it despises the Republican Party. To hear these people the Dems are reactionary running dogs. They’re completely off the spectrum of nuts.

Sure. Keep fooling yourself.

Then, notice how many democrats are condemning the fascist Antifa. Or how often the thugs show up to shutdown a democrat trying to speak.

Sure. Pull the other one.

Crickets. That’s all you’ll get. It’s democrats that created them and support them, and cheer them on.

You are correct, Sir.

From ‘milkshakes’ to firebombs. That escalated quickly.

This one believed he was still in his ‘safe zone’ and tried to up the game.
He found out Tacoma isn’t Portland and provided a graphic example for the rest of his pals in the area.

Since antifags show a tendency to run the eff away when things go sideways for them and they start bleeding, my bet is that we’ll see little more than loud mouthed protest from them anywhere in the Pierce county area.
If not?
Give them the same warm welcome as he got. Which is a good rule for anywhere these idjits show up.

True. This one was definitely from a different generation. His careful, almost tender prose, thanking comrades, while inciting the idea of delivering violence in order to save humanity from itself is wicked perverse.

He truly believed he was doing Stalin’s work.

The sharp as a tack media will he along any second now to cover this in excruciating detail!

Someone needs to play “Another bites the Dust!” at his funeral.

Female reporter interviewing famed Finnish sniper..”Did you find it hard to kill another human being?” “Yes, especially when they were running.”

Female reporter asking one of our snipers … “What did you feel when you shot the enemy?” “Recoil”.

Another set of translated books are by a French author: Russian Nationalism and Russian Eurasiansm – I forget the proper titles and both are hard to find. (both books are collected essays – white papers – by various writers)

What a deluded crock of $h!t

Usually a manifesto states some objective, specifies what the writer is rebelling against. One might expect a self-styled “black and white thinker” to have some clear target in mind. But all I can get out of this is that “patriots” are supposed to fight to release foreign invaders so that they can continue their invasion unimpeded. Strange notion of patriotism.

If the FBI wasn’t corrupt, we could infiltrate such a group and start making oodles of arrests on RICO and conspiracy to commit murder charges. Hmmm… at this point, that’s looking less and less likely.

“Comrades who understand that freedom means real freedom for all and a life worth living.”

Spronsen was shortchanged in the brain line, only receiving about a quarter of the normal allotment. He shares that with the vast majority of the progs.

You might also note the Fraud Squad also refused to condemn the attack on the ICE facility.

Hopefully they follow through, and we can get this over with already and move on with our great way of life, minus these jackasses and their handlers.

Works for me. Now, let’s focus on more like this.

Concentration camps huh? Keep it up AOC and all you Dems will be looking for a job in November 2020!