New Hampshire Poll Has Williamson Polling Ahead of Booker, Gillibrand, and O’Rourke

New Hampshire Poll Has Williamson Polling Ahead of Booker, Gillibrand, and O’Rourke 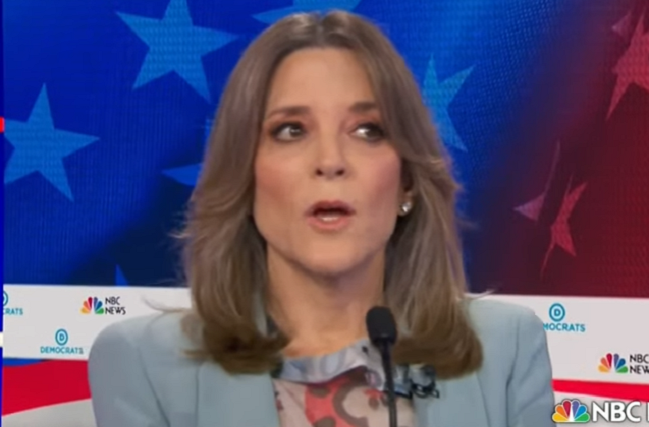 A poll released Monday by Saint Anselm College’s New Hampshire Institute of Politics could spell trouble for some big-name candidates. But it’s time. The field is crowded and should start consolidating.

First, the losers, sort of:

To begin with, Marianne Williamson saw a jump of 1.5 points, putting her at 2% and is polling ahead of Booker, Gillibrand, Gabbard, Inslee, and O’Rourke (who polled at 0%). As Mike wrote this weekend, someone needs to tell O’Rourke he’s done.

And then there’s Bernie. He dropped a whole 6 points, putting him in the middle rung with 10%. As we’ve blogged before — Bernie was a novelty in a tiny field. In 2020, he’s just a (very) loud old man yelling at clouds compared to the younger, equally as progressive crowd he’s battling.

For perspective, Andrew Yang is polling at 5%.

Mayor Pete is holding steady at 12%.

Biden maintains a handy lead, but dropped two points since April, putting him at 21%.

NHIOP Executive Director Neil Levesque summarized the results, saying, “In the Saint Anselm College Survey Center’s first look at the New Hampshire Democratic Primary field since the first series of debates, Joe Biden continues to hold a lead in the ballot test, with 21% of primary voters expressing a preference for the former Vice President. However, his lead has narrowed considerably since our last poll in April, as Senators Kamala Harris and Elizabeth Warren have seen a significant post-debate bump, claiming 18% and 17% voter support respectively. Mayor Pete Buttigieg has maintained his support at 12%, while Senator Bernie Sanders has fallen below 10%. Senator Cory Booker and former Congressman Beto O’Rourke have both seen their support virtually disappear.

“The sources of Biden’s support suggest that his narrow advantage may be precarious, as it comes from older and more conservative voters, while Warren leads among the more energized ‘very liberal’ voters. Indeed, among voters that are ‘extremely interested’ in the upcoming presidential election, Harris and Warren are tied at 20% support, leading Biden at 19%. Among ‘extremely’ and ‘very interested’ voters, Harris leads with 19% support to Biden’s 18% and Warren’s 17%.

“It is still very early in the process,” Levesque concluded. “However, there are some trends emerging as voters sort through a couple dozen options. Joe Biden is a familiar, well-liked and well-respected figure in the Democratic Party, but between them, Kamala Harris and Elizabeth Warren demonstrate a significant appetite among younger, more liberal voters for a progressive standard-bearer to send against President Donald Trump. It is also becoming increasingly difficult for lower-tier candidates to get the attention they need to gather support, as even formerly solid contenders have seen their support dissipate and gather behind the emerging top tier of candidates.”

Which is the biggest joke – Spartacus, Skateboard Beto or Kirsten the Barmaid?

Seriously, on the one side, eff New Hampshire.

On the other side, ask them their sentiments re: decomissioning the Electoral College.

The sources of Biden’s support suggest that his narrow advantage may be precarious, as it comes from older and more conservative voters

Precarious indeed. Slow Joe’s just rolled out Act II of the mother of all D’rat whoppers, “If you like your health care plan . . . you can keep it.” Older voters know better than the whippersnappers that this particular issue can be a matter of life or death, and they’re going to be very underwhelmed.

Well, she’s the only one of the lot I don’t think hates me and wants me to die. (Not that they know me personally, but people with my beliefs, e.g. male and female are biologically determined and a function of the body not the brain, gay marriage is a contradiction in terms because that’s simply not what marriage *is*, sex outside of marriage is dubious at best and clearly wrong in the case of one-night stands, abortion is morally inferior to bearing a bastard which is morally inferior to marrying a spouse you share nothing with except the child-to-be.)

Bernie is tanking. The left has decided that Warren’s anti-privilege score is higher because she’s a woman. They have only marginally docked her for trying to cheat to get an even higher score most of her adult life.

Interesting, I’m seeing a spattering of reports that Bernie’s not very well-liked by individual members of the leftstream media. They find him cranky, snippy, and rude. Mostly because he is.

I think it was Aesop who said: “Never trust a man who combs his hair with a balloon”.

I could be wrong

I believe that was one of Noel Coward’s.

And it was Abe Lincoln who said that about 90% of Internet attributions are imaginary.

I thought that was Firewall Jackson.

I’m telling you, the Democratic nominee is not in the race yet. It’s either going to be Mark Zuckerberg, or Mark Cuban Someone from outside of politics it’s going to be the only sane Voice.

Don’t deny us seeing another 1972. McGovern was a loon, but somewhat of a sane loon. Today’s bunch is exponentially loonier. We don’t want any white hats riding in to save the day.

According to H. A. Goodman, Hillary will step up this fall to save the Democrat Party by offering herself as the nominee.

You mean she’s already at work in the background?

Not at all sane. It’ll be Moochelle or Shillary.

I can’t help but think that if I tuned in to one of these Democrat debates, they’d all sound to me like the “Despicable Me” minions — with Marianne Williamson warbling gibberish to the tune of “Kumbaya.”

Dingbat of the Free World.

At least she isn’t a malignant swine like Fauxchaontas, kamala harris or hillary clinton.

I kind of like this old rich hippie chick. What’s the difference at this point, the destruction of our civilization is on autopilot. But is she Jewish?

How about that, she is Jewish. I like her chances then.