Professor Jacobson discussed the use of “intersectionality” theory in promoting anti-Semitism. 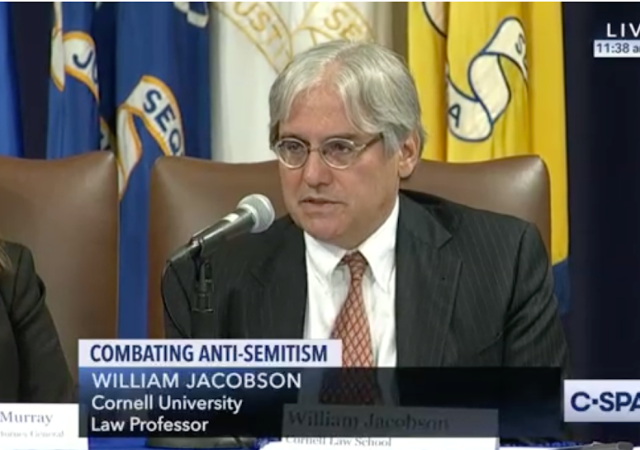 The Department of Justice held a Summit on Combatting Anti-Semitism today.

Our very own Professor Jacobson will spoke about anti-Semitism that has plagued America’s college campuses, in particular, the issue of intersectionality. 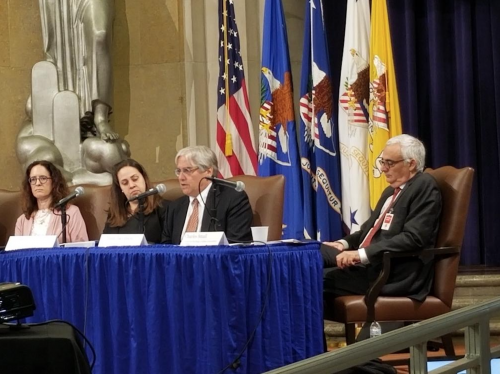 Professor Jacobson covered topics stemming from a few of his posts that concentrate on the “intersectionality” theory in promoting anti-Semitism. These posts include how student activists turned an anti-rape group into an anti-Israel group and defeating BDS at Cornell University.

The summit also covered topics such as battling anti-Semitism while respecting the First Amendment and prosecuting hate crimes. The last panel will have Secretary of Treasury Steven Mnuchin and FBI Director Christopher Wray to speak about how President Donald Trump’s administration has taken on anti-Semitism.

Here is the full agenda:

Summit on Combatting Anti-S… by on Scribd

Jews are a huge asset which benefits all of humanity, by and large, those who dislike Jews are useless, to themselves and especially to the rest of humanity. They could all evaporate and not be missed.

The only problem with Jews, are the Jews in name only, who are bent on self-destruction, and taking everyone else with them.

OK, whee is the second panel that was going to begin at 1100 East Coast Time? I figure that is the campus related panel in which the good Prof. Jacobson will be participating.

I was glad to see Charles Small point out the funding by Middle Eastern countries, especially Qatar, to many of our universities (not to mention public high schools!)- $ with which universities have not reported accurately. Money that often has links to groups such as the muslim brotherhood.

I am especially bothered by treatment of Jews on college campuses. I am also bothered by efforts to prevent dumbs feelings from being hurt on campuses. Being exposed to diverse views is a very important part of higher education. How can young people develop critical thinking skills in a PC vacuum?

Excellent. Made the general case for why antisemitism continues to be a fundamental existential problem for the free world while also maintaining a focus on specifics. There really is too much standing around by good people seemingly waiting for evil to happen. There is no virtue in being the last one to be eaten by the alligator. Everyone needs to be in this fight now because sooner or later, we will be when there will be fewer people left to help us.

Watched both morning sessions all the way through. It was compelling. Thank you for letting us know it was on. Dr. Jacobson was extremely interesting when he discussed intersectionality and the issues of how anti-Trump sentiment gets wrapped up in anti-Semitism. This led into a powerful comment by Ms. Lewin that whatever is the “atrocity du jour” gets conflated with Jews…there is always an excuse to be anti semitic. If this becomes available via recording, anyone who hasn’t seen it should watch.

C-Span has it on their site.

One group must be singled out and protected. National treasures like Epstein and John Liss must not be bullied in any way.

Conflating two individuals to an entire group of peoples is not a compelling argument for your position. If you have one.

Let’s go with Saul Alinsky, stick with the big hitters.

Do a balance sheet. Taking into account all the negatives, the Jews have always been an overwhelming net benefit to any nation among whom they have lived.

Hitler, Stalin, Mao, Lenin, Pol Pot… Not a Jew among them.

Not a Jewish perpetrator among these lunatics, either:

What rathole did you crawl out of, Jack?

The Bolsheviks were Jews. Marx was a Jew. 66 million Russians murdered die to their ideology. But we must not say anything nasty about you, we must be censored so you always were the white yarmulkes.

The Bolsheviks were not Jews. There were some Jews among them, just as there were Jews in almost every political party and movement.

Marx was a Christian antisemite. (He was technically also a Jew, in the sense that his mother’s mother had been Jewish. But this had no impact on his ideology, except perhaps to make him more determined to hate and distance himself from Jews.)

Your commentary on intersectionality was both educational and compellng Dr. Jacobson.

Did he mention who gave the world Intersectionality? The Bolshevistic Jews of the Frankfurt School, who left Nazi Germany to be welcomed to America only to plot the demise of Western civilization.

That is a load of bullsh*t. First of all, the Frankfurt School were not Bolsheviks, and at least 3/4 of what right-wing whackos write about them is antisemitic garbage. But more importantly, they had nothing to do with intersectionality. They were a bunch of straight white educated upper-middle-class men, soaked in privilege. Intersectionality was invented entirely by what we are now supposed to call “womyn of color” or something like that.

Hitler, Stalin, Mao, Lenin, Pol Pot… Not a Jew among them.

Not a Jewish perpetrator among these lunatics, either:

What rathole did you crawl out of, Beretta?

Who will play Professor Jacobson in the movie?

If the Prof lets his hair continue to grow? — Brad Pitt.