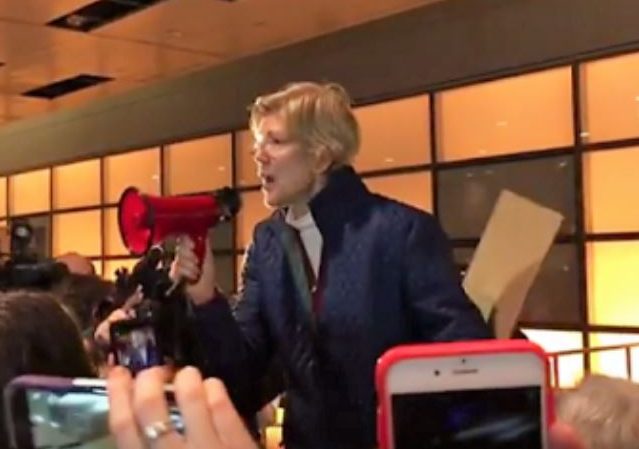 The latest WSJ/NBC Democrat primary poll shows Sen, Elizabeth Warren (D-MA) leaving Sen. Bernie Sanders (I-VT) in the dust.  Warren, though, may want to rethink her strategy of lunging to the far left, particularly when it comes to embracing open borders.

Biden gets the support of 26 percent of voters who say they will participate in next year’s Democratic primaries or caucuses, while 19 percent back Warren.

They’re followed by Sens. Kamala Harris, D-Calif., and Bernie Sanders, I-Vt., who are tied at 13 percent.

"I have previously criticized Republicans who accused liberals of wanting 'open borders.' President Trump tweets about this endlessly. But I have to admit that it’s hard to see much daylight between Warren’s plan and de facto open borders." https://t.co/0tm1TrfjaC pic.twitter.com/j707PvsgzS

Elizabeth Warren has an immigration plan. Here are the highlights:

Expedited removal will be ended. The Border Patrol will be reshaped from “top to bottom,” and will focus their efforts on “homeland security efforts like screening cargo, identifying counterfeit goods, and preventing smuggling and trafficking.” The whole thing is very similar to Julian Castro’s plan.

The answer to his question is, of course, “yes.”  And Warren has apparently decided to go all-in on open borders . . . while stopping just short of explicitly saying so.

Drum is not the lone leftist voice warning about Warren’s radicalism or worrying that the Democrats’ open borders strategy is a bad idea.  Perhaps Democrats really are “conspiring to reelect Trump“?

Democrats are 100% for open borders. They just can’t say it openly because they know the backlash from regular Democrats will be fierce. Forget Republicans. Warren and the rest of the field are afraid that if they say open borders those who call themselves Democrats but aren’t leftist lunatics will abandon the party. Which of course will lead straight to a Trump 2020 landslide.

So they talk around open borders but when you add up everything they are saying it’s clear that they want open borders and a path to citizenship. Why?

Isn’t that a wrongful use of de facto? Isn’t it more accurate to say it is hard to see much daylight between Warren’s plan and de jure open borders? Because her plan is de facto open borders as it is.

I know a segment of the population has heard of de facto but never de jure, but still, the substantive point is that policies of “let them all in” and “don’t detain anyone” is open borders, whether that is what your “laws” say or not.

There are no moderate Democrats running for President. They’re all in lock-step for open borders, sky-high taxes, Green New Deal, et al… The only ones who make a squeak about skipping any of their leftist line get tossed straight out of the running.

It frightens me, as it should frighten anybody who even thinks about letting these leftist loons in a position where they can control our lives. And control is their goal.

She is a deranged whore desperate for power. And a whore as venvegeful as hillary clinton.

God help us if she or that other angry whore kamala harris gain power.

This Kevin Drum guy is just now figuring this out? More than a little slow, isn’t he.

He’s just now admitting it. Long ago they, Ds, lefties, communists, know what has to happen in order for the left to grasp power permanently.

But having gained his freedom, Fritigern [today’s Democrats] reneged on his promise to Lupicinus [today’s trusting GOP] and mobilized the Thervingi [Group 1 begging admission to Roman Empire], who then allied themselves with the Greuthungi [Group 2].

The result was a unified and massive Gothic [read, non-American] army that was now loose and armed in Roman territory [in the USA].

Thus began six years of war that would devastate the region and leave countless dead, including the Emperor Valens [as proxy for America], who died fighting the Goths at the Battle of Adrianople in 378.

The eventual peace brokered with the Goths in 382 by Theodosius I [aka “comprehensive immigration reform] allowed them to settle in Roman territory as a self-governed federation between the Danube and Balkan mountains.

But as an independent state within Roman territory, the Goths never integrated into Roman society and remained a source of political instability [e.g., think of all the barrios across the country today; the huge number of no-go zones of Muslims in Europe (and increasingly in America, one of which allowed Omar to become a congressman].

Since that number was first used more than 20 years ago, we have been absorbing hundreds of thousands each year. We are heading to 1.2 million for 2019. So what is the real number? A Bear Stearns report over 10 years ago put the number at over 20 million.

I’m afraid we already have close to 50 million illegals here and now these nuts want to open the flood gates and put most of them on welfare? Are they trying to start a civil war?

There needs to be drastic action to drive those illegals out of America …. and make Mexico pay for it 🙂

Hey Phil, I wrote about this last fall: https://legalinsurrection.com/2018/09/report-twice-as-many-illegal-aliens-in-u-s-than-previously-estimated/

Report indicates there are likely 22 million but concludes with the observation that the number could be as high as 29.5 million.

Yale did a study last year and put the illegals at 22 million and possibly as high as 33 million.

I think this is a pretty straightforward calculation on the part of Warren and the left wing of the D party. They view that with the full cooperation of the MSM and friendly state vote registrars and vote counters they will win the Presidency in 2020 and maintain control of the House and perhaps even take the Senate. They are on record that they will win “by any means necessary.”

The sum total of their immigration, pathway to citizenship and voter eligibility policies will then solidify their control over all 3 branches of government for years to come, perhaps forever which will enable them to continue to transform the USA into the socialist paradise they all want.

I don’t think its far fetched to assume they will succeed in this plan. Trump won 3 states by a sliver, the Dems can easily cheat their way into regaining those. FL is always close and will now have thousands of felons voting and the vote counters in Miami Dade will find a way to cheat if necessary to ensure a win in FL.

This is my senator. She has not even bothered to respond to any of my emails for over a year. In fact, I don’t think she has even been in Massachusetts for six months.

The entire democrat party is for open borders. To date, not a single democrat has come out against any of the candidates calls for “decriminalizing unauthorized border crossings”