Report: Twice As Many Illegal Aliens In U. S. Than Previously Estimated

Report: Twice As Many Illegal Aliens In U. S. Than Previously Estimated

What happens to every rubric of U. S. economic, national security, and social policy when a key demographic is revealed to be not only wildly wrong but is doubled?  We’re about to find out.

A new study released by Yale University and MIT reveals that the previously accepted number of illegal aliens in the U.S. represents only half the actual number.

The report finds that there are 22 million illegal aliens, not 11 million as previously believed, living in the United States.

A new Yale study, using mathematical modeling on a range of demographic and immigration operations data, suggests that the population of undocumented immigrants in the United States may be more than 22 million—more than twice what was previously believed. https://t.co/XXcMMWHqYM

The undocumented population in the United States could be twice as large as the most commonly-used estimate, according to a research study published Friday in the scientific journal Plos One.

The paper, led by Mohammad M. Fazel-Zarandi, a researcher at Yale and Massachusetts Institute of Technology, estimates there are 22.1 million undocumented immigrants in the United States.

Fazel-Zarandi’s study compared inflows and outflows of immigrants as well as demographic data. According to the report, the number of undocumented immigrants could be as low as 16.5 million, or as high as 29.1 million.

“We combined these data using a demographic model that follows a very simple logic,” Edward Kaplan, a co-author of the report, told Yale Insights. “The population today is equal to the initial population plus everyone who came in minus everyone who went out. It’s that simple.”

Most previous estimates, based on the U.S. Census Bureau’s annual American Community Survey (ACS), place the undocumented population at around 11 million people. 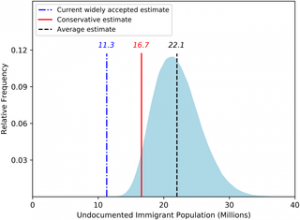 The study itself notes that even if the researchers use “unrealistically” “conservative assumptions,” the minimum number of illegal aliens residing in the U. S. would be 14-16.5 million, not the 11.3 million typically cited.

The results of our analysis are clear: The number of undocumented immigrants in the United States is estimated to be substantially larger than has been appreciated at least in widely accepted previous estimates. Even an estimate based on what we view as conservative assumptions, in some cases unrealistically so, generates an estimate of 16.7 million, well above the conventional estimate of 11.3 million.

The mean of our simulations, which range over more standard but still conservative parameter values, is 22.1 million, essentially twice the current widely accepted estimate; the ninety-five percent probability interval is [16.2,29.5].

Even for the scenario presuming net inflows of 0.5 million per year for 1990-98 our results still exceed the current estimates substantially. The mean estimate is 17.0 million with a 95% probability interval of 13.5 million to 21.1 million. The conservative estimate for this scenario is 14.0 million, still significantly above the widely accepted estimate of 11.3 million.

It would seem that no matter how they crunch the numbers in their simulation, they can’t arrive at the 11.3 million.

Their final estimate is 22.1 million, though they do conclude their report by noting it could be as high as 29.5 million.

Watch the researchers discuss their methodology and findings:

The only change will be in the intensity of the debate. Dems must be salivating…. one amnesty law away from eventual single party rule in the country. Why earn elections when you can buy them with government money. Think of any opposition to them in the future as Kavanaugh on steroids.

So…. learn Spanish as a second language now versus Chinese as a first language for later on.

Now all those numbers on the total cost of illegals can be doubled.
I had previously run some rough calculations on how many semi mounted human cannons we would need to inexpensively and reasonably quickly deport illegals. It appears now that it would take at least 20,000.
getting rid of what is nothing less than an invasion is expensive and time consuming. We need to create an incentive to get them to leave on their own. How about we make illegal entry on the south border a capital crime. Once a few are sent home in caskets, the rest of the 22 million will want to leave asap, at no further cost to American taxpayers.
Also, plug the anchor baby loophole, and start extracting costs of building a wall and border enforcement by taking at least 20% of the $70 Billion they are transferring to family in Mexico.

11 or maybe 16 or maybe 22 or as high as 29 million. Beyond me. Besides, at present, I’m preoccupied by the population one need to make eight a nine.

Are they going to do the follow-on analysis and determine how that number affects the economy, our standard of living, the drain on our federal resources as well as state and local resources?!

It would be DEVASTATING to the Dems if someone does that study.

The study authors state their only goal was to determine an as accurate a number as they could for the purpose of others to have accurate numbers for those purposes to work with.

Regardless, anyone that believed the number was at 11 million for 18 years was too stupid to be useful.

And their still being conservative.

Their final estimate is 22.1 million, though they do conclude their report by noting it could be as high as 29.5 million. If you look at their chart, it could be actually higher than that.

Then figure that they average 5 children per generation. Often drawing welfare at least part of a year.

Immigration reform is a quick fix for second and third-world nations. A cover-up of collateral damage from social justice adventures. It is arbitrage and civil disenfranchisement (e.g. gerrymandered districts) in first-world nations. And compensation for the millions of [wholly innocent] lives sacrificed under the progressive liberals’ selective-child areligious/amoral policy.

Immigration reform should not exceed the rate of assimilation and integration before Planned Parenthood. It should not serve to avoid emigration reform in second and third-world nations and as a cover-up for anti-nativism, redistributive change, and diversity.

When I grew up, there were no immigrants. None. And we all spoke English, and we could all make and take a joke, and no one was sputtering at us every other minute that we were racist.

Sick of it. And our reps just refuse to do a damn thing about it. Wish they’d move to Honduras and run for office there. They’d be more at home. The Dems and GOP.

Time for another 45 year immigration moratorium.

Perhaps our 2020 Census should ask a question about this. (Mutter, Mutter)
Oh, my apologies. I didn’t know it would be a bad thing to ask.

Most of them would lie anyway.

I wonder if anyone will be studying this?

“See, if you look at the drug war from a purely economic point of view, the role of the government is to protect the drug cartel.” – Economist Milton Friedman (1991)

You don’t hear a word about that corruption anywhere. Evidently the Deep State is willing to give up a lot to keep that.

I see the Deep State has some support around here.

The most obvious clue is perhaps that the number never changed . . . like one of those women who never age past 35. Year after year, the headlines droned on about the 11 million, as more and more flooded in and started cranking out those famous “anchor babies” (who, of course, don’t themselves count as illegals, even though for all practical purposes, they are). Antiquarians probably remember when it would be “five years” before the Reds could develop an atomic bomb. Always, the magic mantra was “five years” . . . right up to the time the Soviet Union—surprise!—exploded one. Huh, how’d that happen . . . everybody always said we had five years . . .

Numbers are great. Most people don’t really notice them, and of those who do, relatively few understand them. But everybody’s impressed by them. A local school committee person come to me for advice once. She had some numbers illustrating some financial situation the local school board was stuck with, and she was having trouble getting anyone else to take it seriously. I advised her to put the numbers into graphical form. No deception; label the axes clearly, don’t tilt the axes one way or another like the newspapers do for, ahhh, “artistic” reasons; just tell it like it is. I told her nobody would understand it, but that they would finally think that she did.

She later told me that it worked perfectly—they didn’t even ask questions, but promptly caved under the visual assault.

The Warmunists used the same sort of attack with Mann’s “hockey stick” graph. Fake graphs work almost as well as real ones. The human brain tends to go catatonic when it encounters numbers, and its critical faculties go dormant.

As for this study—color me skeptical.

This is not a methodology. This is humor.

Another bit of humor is the pairing of Yale and MIT. They go together like, say, “old folk’s home” and “hand-grenade factory”. One of these things is not like the other . . . Yale is perhaps American education’s current hotbed of rampant political correctness, easily toppling the old kings like, say, the University of Arizona, or even mighty Berkeley. MIT is something else. (MIT is always something else . . . and, as any alum would insist, always will be.)

Sorry, this smells like an odiferous vegetable, even if it’s not actually from The Onion.

I checked both Yale and MIT websites and they both talk about this research, so it is not fake news.

Duh. The 11 million figure was first stated 15 years ago. And we knew was wrong then.

Go to fairus.org for the real numbers. This group of people live in lala land. There are about 50 million illegal aliens living in our country that don’t belong here.

And this doesn’t count the 6 million “anchor babies” – all of whom are illegal aliens as well.

Been saying for years – the real number is somewhere around 30 million.

Census is a farce.

If i was to guess, I would say that the true number of illegal immigrants is much closed to 30+ million people; 10% of the current US population. This, noted above, does not count the number of anchor babies living in this country with their illegal immigrant parents.

It would be wise then to assume that the proportions are all out of wack. Remember those proportions that told us a wall wouldn’t do anything because most illegals are overstayed visas? Yeah, those are just the easiest ones to track if you don’t go looking.

The real number is probably closer to 40 million. I support the 3S Strategy: