Democrats defend a racist, anti-Semitic race hoaxster like Sharpton to own the own conservatives and Trump. Who’d have guessed? 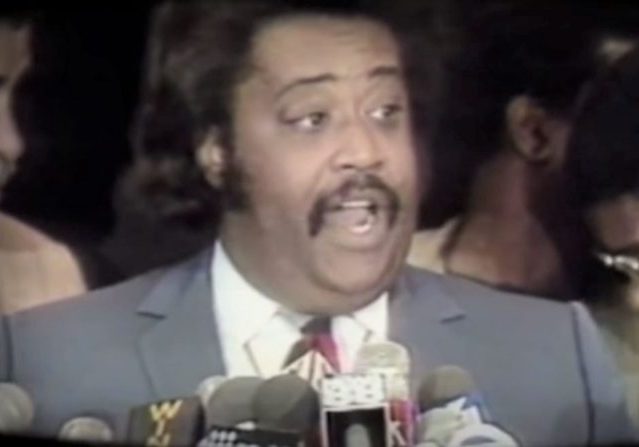 President Donald Trump tweets out criticisms of someone or something. Democrats hop on he Twitter machine and left-wing cable news networks to denounce his comments and defend the object of his ire.

It’s a deliberate strategy on Trump’s part. He designs it to get liberals on record, taking positions on public figures or issues that are unpopular with most mainstream Americans. Democrats take the bait almost every time.

My takeaway from glimpses of the fighting is that Trump has Democrats defending and supporting:

1. The anti-Semites and socialists of The Squad.

A person doesn’t have to believe Trump is playing 4D chess with Democrats to admit that it was a masterstroke on his part to attack Al Sharpton’s visit to Baltimore in the aftermath of the President’s criticisms of the city:

Unironically, race hustler Sharpton accused the President of having “a particular venom for blacks and people of color:”

Rev. Al Sharpton: Pres. Trump "attacks everybody…but he has a particular venom for blacks and people of color. He doesn't refer to any of his other opponents or critics as 'infested.'" https://t.co/HKvm5Nv5mg pic.twitter.com/UVWxG9htjt

It’s not true that Trump only uses the word “infested” when it comes to “blacks and people of color. What is true is that Sharpton is the absolute last person on earth who should be lecturing anyone anywhere when it comes to language that targets a specific race, and having “a particular venom” for a group of people:

Those are strong words for Al Sharpton, who previously referred to members of the Jewish faith as:

For decades, Sharpton has been profiting off of anti-Semitism. https://t.co/seU2atVohM

“I believe in offing the pigs. Well they got pigs out here. You ain’t offed one of them…” pic.twitter.com/K7X3Tk2A0F

Nevertheless, Sharpton pretended throughout the day Monday that he was holding the higher moral ground. And to back it up, several Democratic presidential candidates rushed to social media to kiss Sharpton’s ring:

.@TheRevAl has spent his life fighting for what's right and working to improve our nation, even in the face of hate. It's shameful, yet unsurprising that Trump would continue to attack those who have done so much for our country.

.@TheRevAl is a champion in the fight for civil rights. The fact that President Trump continues to use the power of the presidency to unleash racist attacks on the people he serves is despicable. This hate has no place in our country. It's beneath the dignity of the office.

.@TheRevAl has dedicated his life to the fight for justice for all. No amount of racist tweets from the man in the White House will erase that—and we must not let them divide us. I stand with my friend Al Sharpton in calling out these ongoing attacks on people of color.

I've known @TheRevAl for decades and Trump's characterization is not only disrespectful, it's untrue. While @TheRevAl was pushing for justice in the teachings of Dr. King, Trump was calling for the execution of five innocent black boys. https://t.co/UhR1cpjpxj

Democrats are defending a racist, anti-Semitic race hoaxster like Sharpton to own conservatives and Trump. Who’d have guessed?

Twitter users were quick to react, reminding the world of just what a low-life and detestable person the candidates were standing up for:

Al Sharpton is truly one of the most despicable human beings on the public stage. A liar and anti-Semite who has knowingly stoked racial tensions and anti-Jewish sentiments. He has intentionally stirred up riots and promoted false rape claims. A dirtbag of historic proportions.

While @KamalaHarris praises Al Sharpton, she should remember the time he caused riots in Harlem and encouraged the arson of a Jewish owned business killing seven innocents and Sharpton's thug.

As one of the cops who worked those riots, I remember.https://t.co/VpCxie8M7c

MSNBC’s Joe Scarborough, who was practically plumping Trump’s pillow during interviews back in 2016, took a swipe at those who reminded him of how as a Congressman he once pushed in 2000 to officially condemn Sharpton (who is also an MSNBC show host) as a matter of Congressional record:

Thanks to those reminding me of how stridently Al Sharpton and I opposed each other 20 years ago. We take pride in our friendship today because of that history, recognizing Jesus’s words that all have fallen short of God’s glory and we should forgive each others 70 x 7 times.

Predictably, Scarborough made the issue personal even though the more significant issue at hand is that Sharpton has never once apologized publicly for nor asked for the public’s forgiveness for:

And the reason he hasn’t asked for forgiveness for any of it is that he doesn’t think he’s done anything wrong.

On top of that, Democrats and their media enablers have been very successful at hiding the most controversial aspects of Sharpton’s past from public view. DC Examiner executive editor Seth Mandel explained last month, thanks in large part to President Obama and de Blasio, Sharpton is viewed as a kingmaker of sorts in Democratic circles for the black vote in spite of his past.

Hello to reporters: Democratic candidates for president are openly declaring their love and admiration for a violent antisemite who led a pogrom in NYC and then tried to lead a second one. Seems pretty important!

Democrats will be taking the debate stage over the next two nights in Detroit. If the moderators ask about the Trump-Sharpton feud, it will be interesting to see the pretzel logic candidates like Sens. Kamala Harris and Cory Booker use to explain why it’s wrong for Joe Biden to praise being able to work with segregationist Senators but right for them to praise and defend an unapologetic racist anti-Semite like Sharpton.

There are $16 Billion reasons, just from 2018, to despise elijah cummings, sharpton and the whole commiecrat government in baltimore !

notamemberofanyorganizedpolicital in reply to Lewfarge. | July 30, 2019 at 5:15 pm

I wonder who will deliver the killshot next time Trump or someone around him is asked about his taxes:

Did Al get this resolved yet?

And you or anybody else would be in prison if you tried to evade taxes like that.

Maybe someone at a high level of government can issue a memo to the IRS that it is time to bring Jackson to justice?

[email protected] has dedicated his life to faking racist events.

I stand with my fellow Cherokee Al Sharpton in calling out fake Russian conspiracies.

There. Fixed you for you Lizzie Borden.

Slander and inciting riots that lead to murder and mayhem. Sharpton has quite a resume. I’m glad a guy like Trump exists to remind those that have tried to forget Sharpton’s crimes.

Nothing about Al’s career as a tax-dodger?

They’re forward-looking with a progressive perspective that they hope people will adopt and move on (pun intended).

“and the reason he hasn’t asked for forgiveness for any of it is that he doesn’t think he’s done anything wrong.”

This is the essence of why it has been nearly impossible to improve blacks, and many other people with similarly low IQs,overall life outcomes. To be clear, there are blacks with higher IQs and better outcomes, but that is a fairly small percentage of their population.

In any event, Jackson is nothing more than a con artist, one with a big obnoxious mouth, really sorry excuse of humanity. All those Dems cozying up to him is really good for bringing more voters into the Trump camp.

I recently learned from an eye-witness that Sharpton’s role in Crown Heights was not limited to addressing the mob and whipping them up to further violence. He personally participated in the violence, throwing rocks at Jews. I don’t think this has ever been reported anywhere.

President Trump has the commie left democrats defending rats.
.
.
.
Both the rodent and human variety.

American blacks (and everyone else) would do well to listen to the likes of Mychal Massie (https://mychal-massie.com) instead of malignant Uncle Toms like sharpton and friends.

An example of Massie’s writing:

“Last week, I was a guest on a midday show in Chicago. The show’s host proffered the question: “Why should / would blacks be conservative?” I responded by saying:

“I would on its face accept your interrogative as no less despicable than the thick-lipped watermelon eating caricatures [of the past] and the racist thought that all blacks eat fried chicken. Because the etymology of your question presumes such should not be the case.

“I would allow that all people whether black or white should arrive at said decision based on intelligent, well-thought, cogent reasoning as it pertains to them.

“The host (who happened to be black) had no response to my answer, because I had pointed out the hypocrisy of her question….”

Unless skinny Al was adjusting his BVD’s, I don’t think that was a ring they were kissing.

The Presidents has Democrats defending

rats on the west side bedbugs uptown

What a supreme stroke of branding.

What do Tawana say?

Jew hating and Islam on the move in the Democratic Party.