Baltimore: Democrats use racism charge against Trump to deflect own malfeasance and neglect

Baltimore: Democrats use racism charge against Trump to deflect own malfeasance and neglect 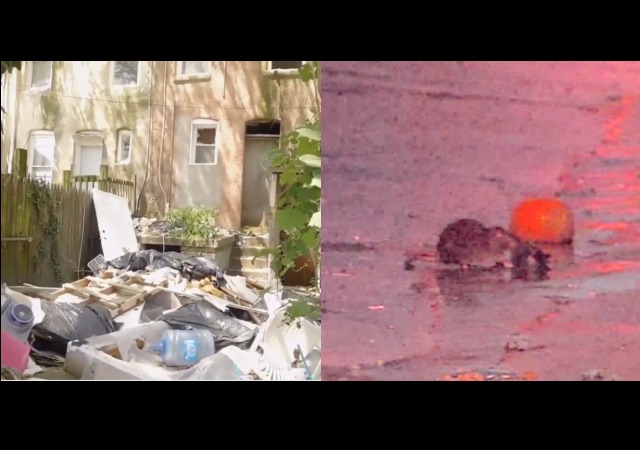 President Trump is yet again being called a “racist” by the leftstream media, Democrats, and some Republicans.  It all started when Rep. Elijah Cummings (D-MD) gained the president’s attention with comments about our Southern border and border agents. Trump responded, quite reasonably it seemed to me, that Cummings should look at his own district, of which Baltimore is part.

Our first impulse might be to yawn and flip the page, but this is a bit different because Democrats themselves—from the New York Times to Sen. Bernie Sanders (I-VT) to Baltimore’s former mayor—are on record noting that Baltimore is indeed underserved.

The tweets that started it all:

I read that and kind of shrugged.  We know Baltimore is a dangerous, filthy, rat-infested place because the New York Times, Bernie, and Baltimore’s former mayor Catherine Pugh told us so.

Since a few Germans have asked me about the problems in Baltimore, I am sharing this @nytimes piece from earlier this year: https://t.co/iULErzRrE4

Residents of Baltimore’s poorest boroughs have lifespans shorter than people living under dictatorship in North Korea. That is a disgrace.

"What the hell? We should just take all this shit down.”

"Whoa, you can smell the rats." pic.twitter.com/BqhsL2Dsx7

Baltimore has the dubious distinction of being the country’s most dangerous city of its size.

So normal people read or heard about Trump’s tweets and kind of nodded.  Well, yeah, Baltimore is well-known for exactly what Trump stated.

Democrats, the regressive Twitter mobs, and the leftstream media had a different reaction; they leapt to the roof and started screeching “RAAACIST” and haven’t let up.

The problem, apparently, and I’m really just guessing, is that President Trump cannot criticize Cummings’ poor showing in his district because he’s black. Likewise, he can’t criticize Baltimore because many of the residents in its worst areas are black. How do you solve problems if simply noting they exist is “racist”?

We saw this under Obama, too.  Any criticism of any Obama policy or of his and his administration’s many scandals and failures was met with hysterical (and false) cries of “racism.”

How, then, do they respond when Cummings’ own constituents (who are also black) agree with the president?

Michelle on Trump's tweets: "What he said was definitely true. [Cummings] hasn't done anything for us"

Michelle on Cummings: "He's worried more about [caring for illegal aliens at the border] than his own people"

More trash. More concerned residents. People live in the home with the silver van. This is @RepCummings district. This has nothing to do with race. Let us all pray the city removes the trash & install cameras to catch the individuals dumping on the property. #WestBaltimore pic.twitter.com/CCaRH5c0aO

Trump is being called a Liar & Racist for saying West Baltimore is poorly ran by Democrats.

Well here is a video of West Baltimore and according to Democrats this is beautiful site. They like to see black people living in filth.
pic.twitter.com/rzkbbPQj8R

Fox 5 Baltimore in 2017: “A Project Baltimore investigation has found five Baltimore City high schools and one middle school do not have a single student proficient in the state tested subjects of math and English.”https://t.co/MzR71N3miz

Trump is having none of it from the leftist shutuppery contingent.

Just to be clear, the democrats still don’t care, they just care about keeping the $$$ and power.

“How do you solve problems if simply noting they exist is ‘racist’”?

“How do you solve the problem of Islam and Muslims and their aim to force the world to worship their Allah, by any means necessary, if simply noting that Islam is inherently violent is ‘Islamophobic’”?

Underscoring the importance of our First Amendment.

To which Muslims and lefties respond, “We must change the Constitution and the First Amendment.”

Silencing their critics by stifling free speech is their idea of solving the problem.

Trump’s problem is he doesn’t see race when he is criticizing someone. The media and politicians have sacred cows. Cummings has been incompetent for decades, but no one else would criticize him, because of fear of being called a racist. People are afraid of being critical of Al Sharpton for goodness sakes.

“Reverend Reginald Bacon is a corrupt, cynically self-promoting black social justice leader who organizes public protests and sets in motion the media frenzy surrounding the case of Henry Lamb. Bacon’s motive is to profit by helping Lamb’s mother sue Sherman McCoy and the hospital in the civil courts. Bacon claims to be a crusader against racism, but he actually benefits greatly by fanning the flames of racial hatred. Bacon owns and controls a variety of so-called non-profits with positive-sounding names, such as the All People’s Solidarity, the Open Gates Employment Coalition, and the Third World Anti-Defamation League. All of these organizations are really just arms of his far-reaching political power. Bacon is adept at working the system in order to get rich, and his name is a reference to all the “pork-barrel” money he extorts from those in power.”

Republicans are afraid of criticizing Rev. Al Sharpton. Black people and democrats have no such problem, particularly if he should have the audacity to try to work with Republicans (Newt Gingrich and DJT). The same is true of Steve Harvey.

When your core beliefs and principles wither when debated fairly, then you restrict speech and shelter them from scrutiny.

Calling someone racist, in many cases, stifles arguments by making a person defend themselves, many times needlessly against the charge. Truth is not a valid argument as race baiters and their minions pay no attention and have an alternative reality and is never challenged by the dinosaur media.

The Wire was a documentary.

Down here it’s the Tree Rats that are a problem. I’m still using the Sheridan air rifle I got for my 12th birthday to great effect. I can still hit bottle caps at 40 yards with that thing.

Yeah, I guess it’s just a matter of time before the outrage brigade goes after the writers, producers and actors of The Wire, huh? Crickets.

My treerat favorite is a Benjamin .22 pellet popper. The dog always gets excited when he sees it coming out of the closet.

Here’s a radical concept, Baltimore: VOTE HIM OUT!!!

I live about an hour from B-more. I won’t go there anymore. After the attacks/riots at Camden Yards a few years back and just plain nasty city, I’m finished with it.

Someone needs to remind Baltimore residents about the definition of insanity. When they begin to seek different results, there might be hope.

I’m not holding my breath.

Are there any cities controlled by blacks which are well run? I know some competent blacks (including a few living in Baltimore), but have seen far more who were not.

We all benefit from close encounters with the Peter Principle when we overcome it, too many blacks do not make the grade.

I would very much like to see this cycle broken, to see blacks succeed on merit, not on affirmative BS.

Diversity breeds adversity, and, apparently, a progressive pestilence and blight.

Too bad Trump is a public figure …. and the rules are different for public figures. I’d love to see Attorney Plakas tackle this one for 40%. I hear he has a pretty good track record ….:).

The Supreme Court needs to interpret Freedom of Speech to unambiguously mean freedom of true speech. No one has a natural right to pollute the public commons with lies, including unsubtantiated allegations.

The Supreme Court needs to interpret Freedom of Speech to unambiguously mean freedom of true speech. No one has a natural right to pollute the public commons with lies, including unsubstantiated allegations.

Trump may have said some harsh things about Cummings, but his administration is being good to Baltimore:

Baltimore has Opportunity Zones under this administration
http://baltimoredevelopment.com/opportunity-zones

Notice from the link immediately above that Baltimore has a new mayor
“All the pieces are coming together,” said Young, a longtime City Council leader who was recently vaulted into the mayor’s office after his predecessor resigned amid federal, city and state corruption investigations.

Baltimore also has some long-standing corruption problems or else problems with incompetence.

Baltimore has a long history of failing to make good use of the generosity of the US government.
https://reason.com/2015/04/28/baltimores-long-history-of-failed-develo

BALTIMORE BURNING: IT’S NOT A MATTER OF MONEY. WE TRIED THAT
https://www.newsweek.com/baltimore-burning-its-not-matter-money-we-tried-329515

It is merely a coincidence that the most corrupt, crime riddled cities are ruled by d-rats and have been for many decades. It is a testament to their devotion to destroying the 2nd Amendment that their murder rates are the envy of Venezula. The leaders of these cities have sacrificed mightily by limiting their graft so that they have only risen into the top 10%, well below their Congressional brethren. This fixation on good government is just a talking point of the wacky extremist right wing. I forgot to weave racist in there, sorry.

Democrats are too busy teaching the newest protected class [legal or illegal Latino] how to vote. The blacks have learned well and are so reliable in their blind support that they can effectively be ignored.

That racism bull only works when the opposition (boehner, ryan, mcconnell, mccain, etc) are on the payroll. Trump is not.

If you’re a rat mother Baltimore is really a nice place to raise your family.

Most inner city American blacks are on a democrat plantation. They just don’t see it.

Must see video of democratic primary…. 🙂

Chapter 1 of the Democrat playbook… When all else fails, cry racism and act like your a victim of your own policies and actions. I’m interested in finding out what happened to the $1.8 billion in stimulus money Baltimore got from the Obama administration.

Trump is a genius for getting DemocRats to defend the abysmal disgrace of Baltimore and Elijah Cummings. Trump shines a spotlight on this crumbling, crooked, crime-infested DemocRat cesspool and gets impeachment to the back page. Brilliant!