First rare earth processing facility outside of China to be built in Texas. 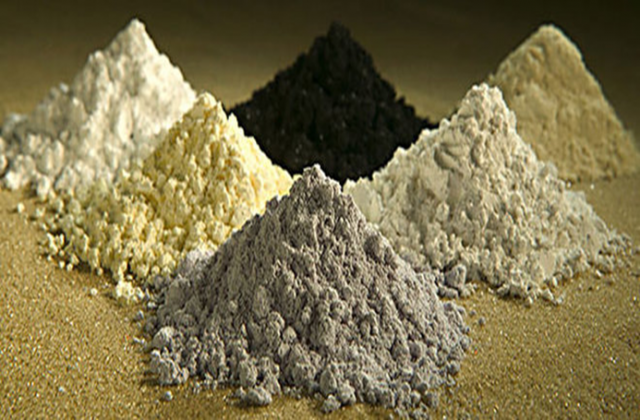 There was once a time that the American economy was threatened by OPEC (Organization of Petroleum Exporting Countries) because we were an importer of petroleum products.

The Americans got busy, started fracking, building pipelines, and developed new technologies. We are now producing “molecules of freedom” in abundance.

Now, after China threatens to cut our supply of rare earth elements essential for certain products, American entrepreneurs are coming to the rescue.

Rare earth elements are used every day. They are metals that are used in everything from cell phones to cars, televisions, military jet engines and medical devices.

However, the tit-for-tat trade Opens a New Window. war between the U.S. and China, Opens a New Window. may present a challenge to the industry which heavily relies on China. The retaliatory tariffs from China on $60 billion worth U.S. goods goes into effect this weekend.

Blue Line Corp., a chemical company based in Texas, is the first and only company outside of China that can process small batches of rare earth. They just partnered with Australian rare earths mining company Lynas to build a processing facility in the U.S.

According to a 2019 minerals commodity summary, approximately 80% of the nation’s rare earth elements and compounds were imported from China.  A view of this situation is summarized by the US Geological Survey: 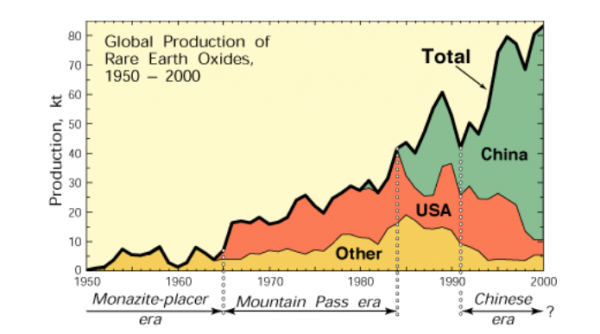 It looks like the new goal will be to have 0% dependence on China.

Rare earth elements are a group of seventeen chemical elements that occur together in the periodic table and have a wide variety of uses in industry (e.g., smart phones, guidance systems, hard drives, MRI machines, optics, and hybrid vehicles). The team leading the mining effort are excited about this new profit opportunity.

Lynas is the largest rare earths producer outside of China. It will have majority ownership of the JV.

Amanda Lacaze, CEO and Managing Director of Lynas, said: “This is an exciting opportunity to develop local separation capacity for our customers in the United States and to close a critical supply chain gap for United States manufacturers.”

Jon Blumenthal, President and CEO of Blue Line, said: “We are looking forward to working with Lynas to provide a secure source of rare earth materials to both US and international markets and using our technical expertise to produce raw materials for uses in green and other high-tech industries.”

Currently, there is one rare earths mine in the nation: California’s Mountain Pass mine . The facility ships about 50,000 tons of rare earth concentrate it extracts each year from California to China for processing.  Since there is no processing facility in the country, the mine’s capacity to be profitable and functional is at risk during the current trade battle.

The only rare earth metals-producing mine in the U.S. is facing short-term refining challenges as the nation looks to reduce its reliance on China for the materials due to the trade war.

… “We’re it,” James Litinsky, co-chairman of MP Materials, which owns the Mountain Pass mine, said Thursday on CNBC’s “Squawk Box.” “If we can’t be economic, there’s no hope for the U.S. industry.”

Out of concern for national safety, the Pentagon is also bolstering efforts to enhance American rare earths production. New facilities capable of processing rare earths in this country are under construction, which will add greatly to the employment opportunities as well.

At least three U.S.-based companies have rare earth processing plants under construction or in the planning stages, including one that is set to open next year at Mountain Pass mine to produce about 5,000 tons of two popular types of rare earths annually, according to a source familiar with the matter.

Additionally, there is also the option of recycling these elements. This lessens the impact of China’s trade threat tremendously, as well as provides a potential investment opportunity.

Platinum, for instance, is another automotive catalyst and it gets recycled because it’s valuable. Platinum is sold by the troy ounce and it goes for about $26 million per metric ton. Recycling isn’t economic for most rare-earth metals, unless of course prices rise.

Of course, higher rare-earth prices are a boon for small-cap mining stocks and the VanEck Vectors Rare Earth ETF may be a good investment, for a time. But that doesn’t mean the U.S. economy has a rare-earth issue.

Additionally, I noted last year that Japan had scored a major rare earths find in muds off its coast. The last time I checked, our relationship with that country was solid.

Finally, I hope the Trump Era of Deregulation can be used to inspire the opening of American rare earths mines. However, any new mine will cost at least a billion dollars to develop over a 10-year span. Therefore, expanding processing capacity is critical.

Good to hear.. we’ve been warned about this for last 12 years or so. Good thing Hillary isn’t president…she sign away these rights/capabilities to China or Russia.

Hillary would have sold these assets to China in exchange for a generous donation to the Clinton Foundation and a series of speeches by BJ at $500,000 a pop (plus inflation).

Thank you, Leslie, for covering the REE/strategic metals issue. It’s not just good for jobs & the economy & continued health of heavy manufacturing in the US to correct the imbalance, but essential for national defense. The Pentagon & defense wonks have been urging action to build up strategic metal reserves & capabilities since the outflow of capacity to China began in earnest in the ’90s. A benefit of the “trade war” is the focus on re-building capacity. Several weeks ago, I was a speaker at an industry association meeting. Another speaker was from US Steel – he was practically shedding tears of joy at the wonders the tariffs and the administration’s emphasis on capacity rebuilding is having on steel manufacturing in the US.

A part of the story that Leslie missed. The name “rare earth” is misleading, they aren’t that rare. California used to be the biggest producer, until -wait for it — environmental regulations.

Neodymium in particular has one critical application super powerful magnets ( basically meaning the magnetic fields for the smallest mass ). So unless Californians want to give up headsets and airpods, or least pay ten times as much, they will have to waive environmental regulations.

Mr. Rod, if newsom is involved, he will hold U.S. industry hostage for concessions to mexifornia. IMHO.

RodFC: The limitations of blogging meant I could not delve into this subject…as I was inclined to do initially. I will try and prepare a Quick Take specifically on rare earths…it is an interesting subject.

There is not today a total American rare earth permanent magnet supply chain in existence. Its not just a matter of building a separation facility in Texas. It will also need a metal and alloy making facility and a magnet maker with the capability to sinter the powdered magnet alloys into customer specified shapes and strengths. Individually these companies would be small at unless they had all of the DoD business or a substantial portion of the consumer business they would be money losers. Private capital is not interested in such small projects with little or no profit potential. So it will take a major policy commitment from the US government for this to happen.

My son needed some specially made magnets for his college project. Found a U.S. company to make them for him. And there were some pretty unique specification for magnetic field alignment that a dozen companies told him couldn’t be done…

The artificial heart he built was implanted in a cow and proved successful. I don’t know if the university or companies he worked with did anything with it after that.

So there are magnet companies that make magnets of all types in the U.S. The people who need magnets seem to be able to find them.

Really, it’s not that simple as these magnet fabricators are dependant on Chinese suppliers.

Yes, there are anti-dumping regulations, and international treaties, and national agencies (etc.) but by the time they do their work (and even assuming they do it honestly and well) competitors have either been bankrupted or otherwise exited the business.

Legal remedies were easier to apply when the threat came from domestic monopolists such as Standard Oil, yet even then plenty of competitors learned that that the practical choice was between selling out or getting out (of the business).

The fact is, the USA is not well equipped to handle foreign mercantilist threats like this. Would you invest in creating industrial capacity that might take years (and $$$$) to build, knowing that a state-financed competitor could and would start a price war as soon as you started producing substantial product?

This tremendous American economic development threatens the very foundation of the Democratic Party and the GOPe.

Thus the silent coup by the deep state.

Which Barr will do little to correct, if anything

Why be negative? He’s done a lot so far.

I’ve always thought of this as national defence.

“Currently, there is one rare earths mine in the nation: California’s Mountain Pass mine.”

You mean, China missed an opportunity to bribe Prez Billy Jeff to declare that a National Monument and so make it “off grounds” for leasing and development? Careless. They’ll have a harder time bribing DJT.

is true, what is the problem?

In 2011 I bought stock in a Canadian REE company – AVL. They claim they are developing a mine in the NW Territories. My original $11,000 investment is now worth $150.

I am convinced that China has information that says the seabeds in their 9-dash area they want so badly to control is loaded with rare earth elements. Vietnam, Philippines and such should be exploring for that right now.

Pity the mine is in California. Also surprised it hasn’t been shit down already because if some common fish in a stream somewhere?

This is just great.

Xi doesn’t fully understand the balls on Donald Trump, nor the dedication of his base.

I think of the “…awaken a sleeping giant” quote attributed to Japanese Admiral Yamamoto (at least in the movies).

This actually harkens back to FDR who received tremendous pushback from industry when he insisted that the US rapidly expand industrial capacity in steel, aluminum, copper etc.
The industrialists argued that if they built as much as FDR demanded that when the war ended the excess capacity would collapse prices and lead to another depression. They were wrong of course and demand actually grew after the war as tho boom of post war consumer goods demand exceeded even the war time capacity for basic materials.