My Buddy and Me! Biden Mocked Over Photo of Obama Friendship Bracelet

My Buddy and Me! Biden Mocked Over Photo of Obama Friendship Bracelet

Oh so now the media and people across the political spectrum don’t like the Obama-Biden bromance? 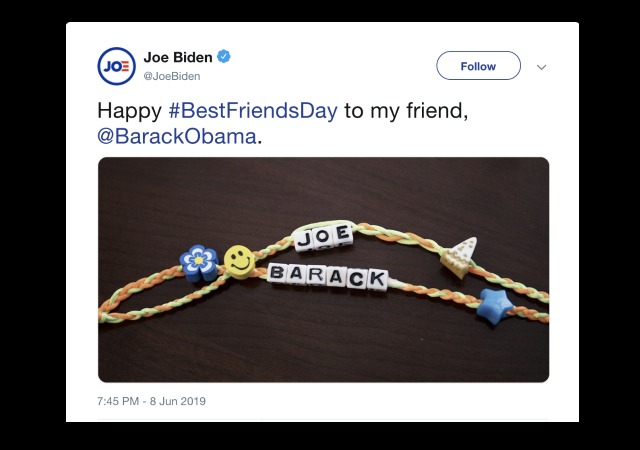 On Saturday we celebrated National Best Friends Day because everything has a day. I guess former Vice President Joe Biden thought he could seize the day to remind people that he served next to President Barack Obama for eight years by posting their friendship bracelet.

Cringeworthy doesn’t quite cut it. Even some of Obama’s closest aides rolled their eyes.

Do you know what I find hilarious? The media, the left, and the right loved the Obama-Biden bromance… until now.

This is a joke, right?

Yeah, I snickered, too, but the media started the Obama-Biden bromance during Obama’s administrations. People on the left and right both embraced the memes that the two eventually shared themselves.

Why is it now rejected? I believe Biden would have posted it even if he was not running for president.

The thing is, Obama made that bracelet for Biden in a video to encourage people to register to vote. He performed many tasks that take longer than it takes to register.

Biden used the same picture of the bracelet in 2016 to wish Obama a happy birthday. Weird, Biden received mostly positive replies to that tweet.

Look at the slideshow of pictures of the two put together by Vanity Fair. The caption on the first picture says, “Fifty percent of all marriages in the United States end in divorce. The other 49 percent of marriages are not as strong as the Obama-Biden relationship.”

Harpers Bazaar published 24 pictures in 2016 to celebrate the Obama-Biden bromance.

Obama added fuel to the popular Obama-Biden memes in October 2017 to wish Biden a happy birthday.

ME: Joe, about halfway through the speech, I’m gonna wish you a happy birth–
BIDEN: IT’S MY BIRTHDAY!
ME: Joe.

Happy birthday to @JoeBiden, my brother and the best vice president anybody could have. pic.twitter.com/sKbXjNiEjH

“Hold on a sec, what did you get here?” the former president interrupts Biden as he asks for mustard.

“I’ve got one of these, what are they called, ham and cheese,” Biden says, holding up his lunch plate at eye-level.

“I think I’m gotta have one of those too,” Obama responds.

“He wants one of those too,” Biden says to an employee, holding cash in his hand.

I could add more, but the Google search brought up too many results. Again, the controversy around this confuses me because we all enjoyed and giggled at the memes before. Primary and election seasons make us different people I guess.

Love the pizza slice, I didn’t miss that.

notamemberofanyorganizedpolicital in reply to rdmdawg. | June 11, 2019 at 5:01 pm

Did they buy that charm from the DC Red Comet Pizza shop?

Your inference is interesting.

notamemberofanyorganizedpolicital in reply to The Friendly Grizzly. | June 11, 2019 at 5:01 pm

Biden should not associate himself with pizza.

DrPizza has brought that up again.

Hey-yy Joe, where you goin’ with that noose in your hand?

The Axelrod retweet commnent cracked me up.

Joe long ago ceased being useful to Jugears. He helped him win middle-America in 2008, and he served dutifully as Impeachment Insurance for eight years. But now he’s just another Irrelevant Old White Guy™ to be ignored as we march rapidly FORWARD towards the fundamental transformation of American into just another socialist shithole.

CreepyHands Joe is going to have to run on Obama’s record, such as it is. Since he offers nothing that modern Liberalism saw in Barry, he can’t really run as a successor or act-alike, but as a deceptive clone or shadow. I wouldn’t be shocked if he starts appearing in blackface and makes a big public deal of his basketball brackets. Maybe he could have his ears surgically altered to stick out. The whole thing is beyond pathetic.

Joe Biden is officially a 6th grade girl. So does that make him/her a lesbian?

It definitely makes him entitled to some SJW grievance points.

If Biden’s elected President, will he wear that bracelet in office?

As if standing by a traitor for 8 years wasn’t enough. Now this.

“I’ve got one of these, what are they called, ham and cheese,”

I hope Joe didn’t forget to get him some of them onions, too.