Omar’s comments are yet another indicator that when it comes to understanding where her critics are coming from, she is genuinely *not* interested. 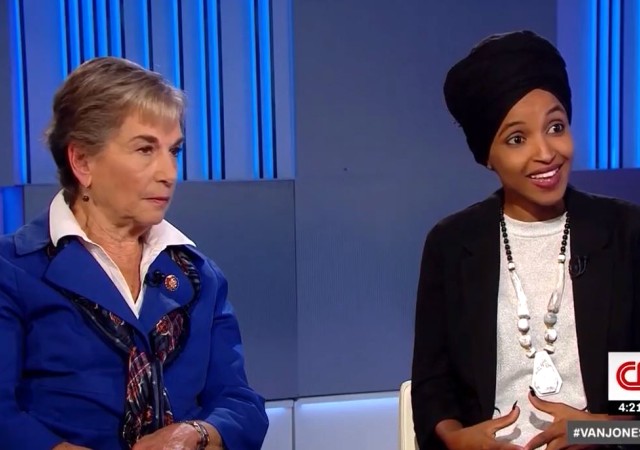 Reps. Jan Schakowsky (D-IL) and Ilhan Omar (D-MN) appeared on Van Jones’s show on CNN Saturday to talk about a number of issues, including the impeachment debate and their teaming up together to combat white nationalism.

During the segment on the outcry over Omar’s anti-Semitic comments from earlier this year and what she says she learned from the push back she received, the two appeared at odds over a suggestion by the freshman Minnesota Congresswoman that some of her critics were using accusations of anti-Semitism as a weapon with which to “shut down debate.”

According to video from the interview as well as the transcript, Schakowsky, who is Jewish, told Jones that Omar “totally heard” and “totally understood” the criticisms against her. Schakowsky also said that they “are both victims of the kind of discrimination that’s going on and the kind of hate talk that is going on” and noted that was the reason they joined together for the op-ed they wrote last month on anti-Semitism and white nationalism.

Omar responded to Schakowsky’s remarks by saying she knew there were people “genuinely interested in fighting anti-Semitism” but she also claimed, without evidence, that there are “those that are interested in weaponizing anti-Semitism to shut down debate on whatever they might not agree on and vilify anybody that they might not want to have any kind of platform to have influence.”

During Omar’s response, Schakowsky’s body language spoke volumes, as you can see from the video clip below. She was clearly agitated with the suggestion by her colleague that some critics – including, presumably, some of their Congressional colleagues – were not genuine in their criticisms.

Schakowsky gently but firmly pushed back on Omar’s claims:

SCHAKOWSKY: Well, let me just say though I think some of the people who were upset about what they heard as anti-Semitism keyed in to were not necessarily trying to weaponize them. That this was this was a genuine feeling. So in part my —

OMAR: Not just some, but a lot of the people. It’s a genuine feeling.

SCHAKOWSKY: Yes. This is genuine feeling and a genuine concern and —

OMAR: There’s a lot of very loud people who may not have a genuine concern.

SCHAKOWSKY: But one of the motivations for me to be public along with Ilhan was to help those people understand where I was coming from, but even more importantly, where she’s coming from.

First things first, Jones should have asked Omar to name the names of those who she feels are “weaponizing” accusations of anti-Semitism. Omar has not been shy in the past about ridiculing Republicans with whom she disagrees in interviews and on social media, including Rep. Lee Zeldin (R-NY), one of the founders of the recently formed Black-Jewish Congressional Caucus.

Since she didn’t name names, it could mean she’s referring to her fellow Democrats in the House. Both Omar and Tlaib have said previously (and without being pressed on specifics) that there were Democrats who they believed were Islamophobic. Who are they?

Jones not pressing Omar on the matter doesn’t mean other mainstream media journalists should give her a pass on this, though. Unfortunately, they will, because she’s a Democrat who in the media’s eyes should not be called to answer for her claims beyond vague generalities.

Secondly, Omar mentioned during the interview that one of the first things she did after getting elected to Congress “was to write an op-ed in my local newspaper about the rise of anti-Semitism when the FBI report came out and the work that we have to do.”

Someone genuinely concerned about fighting anti-Semitism is not going to speak using bigoted terms that marginalize and endanger Jewish voices.

Thirdly, Omar accusing anyone of using incendiary accusations as a weapon with which to shut down debate is like the pot calling the kettle black, considering how often she uses the “incitement” accusation and the “I’m a woman of color” card to shut down any and all critics of her reprehensible comments and actions.

Unfortunately, Schakowsky has acted as an apologist of sorts for Omar since she was sworn in in January, including in this interview segment from March where she absurdly insinuated that Omar was culturally ignorant about anti-Semitic tropes:

Jan Schakowsky (D-IL) says Rep. Ilhan Omar (D-MN) should get special security because the Republicans and the media have made too big of a deal out of Omar’s anti-Semitism:

“Ilhan Omar is a refugee from Somalia, she comes from a different culture. She has things to learn” pic.twitter.com/MNJPoQucR8

House Speaker Nancy Pelosi made similar excuses for Omar in March in the aftermath of the House’s passage of the watered-down “anti-hate” resolution. Omar also has used the “lack of understanding” excuse ever since, including in her interview with Jones, like a get out of jail free card.

One gets the impression that Schakowsky’s working relationship with Omar is becoming strained under the pressure of having to make excuses and explain away Omar’s insistence that everyone else is in the wrong and that she’s just misunderstood.

Just how much more of Omar’s obstinance Schakowsky will endure publicly is anybody’s guess, but Democrats should take note of Omar’s unsubstantiated claims of critics using anti-Semitism accusations as a weapon. They are yet another indicator that when it comes to finding common ground and understanding where her critics are coming from, Omar is genuinely not interested.

It’s good business for the Dems to let Omar have her tantrums until she pisses off enough of the wrong people (in her own party) to become more trouble than she is worth.

Then, she will get tossed aside.

ok… I could see that.

Ignorant implies that she is capable of learning, the truth is that she comes from a group with an average IQ of 68. Ignorant is the wrong word, dull or stupid would be more appropriate.

notamemberofanyorganizedpolicital in reply to JusticeDelivered. | June 18, 2019 at 5:08 pm

Not when she pulls this.

Wow: Email Suggests That Ilhan Omar’s PR Firm Sought to “SHUT DOWN” Any Media Reportage on Her Sham Marriage Tax Filings, Says They’ve Used This Tactic Successfully Before With the (Red) Star-Tribune

Collusion between Democrat politicians and the leftwing media to suppress stories damaging to Democrats?

Schakowsky thinks Omar is going to be a useful ally?? What a failure of judgment, shouldn’t be sitting next to her.

“Schakowsky thinks Omar is going to be a useful ally??”
******
She is probably correct. Intersectional anti-Semitism is becoming/already is mainstream in the Dem. Party. The decades of support and influence by American Jews for the Dem. Party is being minimized and Jews are being marginalized and kicked to the curb by Woke Dems. Members of Traditional Jewish communities are being assaulted and Secular Jews at Universities are now under threat. However, 75% still vote Dem., WTF??

Islam first. Everything else secondary.

The mere fact we have a Jewish Democrat sitting next to one of the most openly hostile anti-semites in all of congress just goes to show that Jews will never leave the Democrat party. As such, I can’t seem to get exited about anti-semitism by the left. Jews accept it, why should I speak out against it, or care?

Jews are a significant asset to humanity, we would all be much worse off without them. That is why we should care. The likes of Omar are completely worthless to the rest of humanity.

Islam should not be treated as a religion, it really is more about trying to achieve world domination and should be treated accordingly.

Islam was solely created to cement a barbarian’s hold on power.

Ask any of your Jewish Democrat friends who represents a more fundamental threat to them, me as a small-government, Trump-supporting, rule-of-law conservative with no interest in identity politics, or Ilhan Omar. I’m pretty sure that they all would name me as the threat. I would love to be wrong about this.

I understand that Omar-tini is coming from the same place as Obama the Minuscule however.

What Did Obama Know About Hezbollah’s Bomb Plot in London?

Anybody who wants to control their own life.

Schakowsky has a few things to learn.

Can we dispense with the (D) party designation already? This should be correctly listed as a C – for communist. Neither politician in the above article would object. In fact Schackowsky would very likely prefer it.

Omar thinks people shouldn’t be offended by anti-Semitism, because she thinks it’s harmless. If they are offended, this to Omar means they “weaponize anti-Semitism.“

Select me for jury duty, please.

It’s disconcerting that Omar smiles constantly, even as she speaks anti-Semitic things. I understood Dr. Mengele smiled and gave sweets to the Jewish twins on home he experimented.

This makes sense only if “weaponizing” is a synonym for “criticizing”—which of course it isn’t, but obfuscation and fuzzy thinking are the Left’s allies.

The Democrat party has been the party of hate, since the Civil War. They have always been the party of divisiveness. They have championed Whites against Blacks, Blacks against Whites, Labor against Owners, Capital against Labor, criminals against the law abiding, and foreigners against citizens. And, the Dems have spent the last 100 years promising minority groups everything under the Sun and then refusing to deliver. And, still these groups keep right on supporting the Party and its politicians. The Democrat Party apparently thinks that is supporters are stupid. And, as the supporters continue to support the Party, even after being lied to and abandoned, perhaps the Party is correct.

Omar needs a direct flight back to her shithole.