While you were distracted by [insert news cycle], Trump continued to reshape the federal judiciary

While you were distracted by [insert news cycle], Trump continued to reshape the federal judiciary

“The Ninth Circuit now has 16 judges appointed by Democratic presidents, 10 by Republicans and three vacancies.” 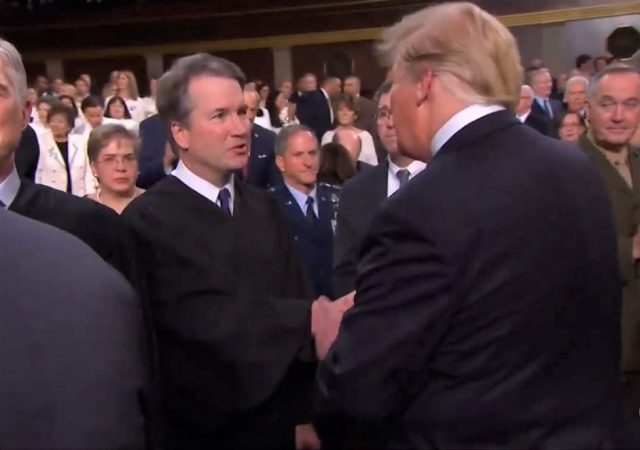 The Trump judicial confirmation train kept rolling down the tracks the past few weeks, as you probably were distracted by the news cycle frenzy of the day.

Trump has the opportunity to reshape the federal judiciary at every level.

This is a theme I’ve writing about since before Trump was inaugurated, Dems’ Nuclear Option will allow Trump to fill over 100 court vacancies quickly (December 26, 2016), and Liberal nightmare: Trump could appoint half federal judiciary (January 18, 2017).

I’ve also focused on how the furious news cycles have distracted just about everyone from Trump’s judicial progress, While you were focused on COMEY, Trump nominated another group of CONSERVATIVE Judges and Republicans continue reshaping federal judiciary, though you probably are focused on Democrat anti-Semitism.

Do you know where things stand now? Of course not, you’ve been focused on Democrat histrionics about Mueller and Barr and just about everything else.

Where does it stand now, over two years later? Carrie Severino of the Judicial Crisis Network, provides the statistics as of May 13, 2019:

Also last week, Senate majority leader Mitch McConnell filed for cloture to end debate on the nomination of Ken Lee, one of President Trump’s currently pending nominees to the U.S. Court of Appeals for the Ninth Circuit. The Senate is also expected to vote this week on the confirmations of two district court nominees.

Nominees Confirmed by the Senate since Inauguration Day: 104

There are many more vacancies to be filled, particularly at the district court level, via Severino:

Looking at these numbers, it’s clear that Trump and Senate leadership focused on Courts of Appeal. From a strategic point of view, that makes sense. Because the Supreme Court takes so few cases, Courts of Appeal serve as the court of last resort in the vast majority of cases. Trump is just a few appeals court judges away from taking over (if you want to call it that), the liberal bastion of the 9th Circuit (emphasis added):

The Senate confirmed President Trump’s nomination of attorney Kenneth Lee to the federal appeals court based in San Francisco on a party-line vote Wednesday, over Democratic objections to Lee’s college writings that disparaged minorities and women.

The 52-45 vote makes Lee the fifth Trump appointee on the Ninth Circuit Court of Appeals, which the president has regularly vilified as hostile and biased for its rulings against him on issues such as immigration and birth control and his ban on travel from a group of mostly Muslim nations. The Ninth Circuit now has 16 judges appointed by Democratic presidents, 10 by Republicans and three vacancies.

By increasing the likelihood of conservative voices on the three-judge panels that decide most of the court’s cases, “I think (Trump’s appointments) will begin to make a difference,” said Carl Tobias, a University of Richmond law professor who tracks judicial selections.

In the latest escalation of partisanship surrounding federal judicial nominations, an advocacy group is being created on the right to maintain momentum behind the Republican judicial juggernaut and prepare for the inevitable next Supreme Court fight.

Named the Article III Project for the section of the Constitution that established the judiciary, the organization will be led by Mike Davis, a former Republican Senate and White House aide who was a central figure in the confirmations of Justices Neil M. Gorsuch and Brett M. Kavanaugh.

Mr. Davis, 41, is known as a take-no-prisoners conservative eager to challenge the left with hardball tactics. He now intends to apply those techniques to judicial confirmations from the outside after his inside work on behalf of Justices Gorsuch and Kavanaugh and scores of federal judicial nominees seated on the bench since the start of the Trump administration.

“What I want to do with the Article III Project is take off the gloves, put on the brass knuckles and fight back,” said Mr. Davis, an Iowa native who was the chief nominations counsel for Senator Charles E. Grassley, an Iowa Republican who was the chairman of the Judiciary Committee until this year.

On top of that, Republicans see judicial nominations as a key to 2020 victory, as it was in 2016. Politico reports, Trump team convinced court overhaul will drive 2020 win:

The White House is rushing to appoint as many judges as possible before 2020 to give President Donald Trump yet another talking point he can rally on as he stumps for re-election.

Trump’s team believes that stacking the judicial system with conservative judges galvanizes the base, demonstrates his ability to follow through on a 2016 campaign promise and will help win over crucial 2020 states like Colorado, Florida and North Carolina. And Trump himself is convinced that judicial appointments are central to both his legacy and policy agenda, as he has pushed for young judges who can serve for decades, according to former administration aides, close White House advisers and those familiar with the administration’s judicial plans.

So while #TheResistance fights for impeachment and other impossible dreams, Trump is changing the judiciary in a way that goes beyond the news cycle or even his presidency.

How quickly would a DemSocialist prez reverse this in 2020? Might be another way Trump rallies voters.

I hope Trump has a plan for re-organizing the GOP. It’s still somewhat early to panic but so far, we are heading for a one-and-done deal with this “reversal”. The most effective plan would be to sweep out the old guard masked RepubliCrats and bring sweep in a new, younger and appreciative generation who “get it”.

A massive landslide victory in 2020 with a new generation eagerly riding his coattails is what we need. Trump overcame the world in 2016. He needs to change the world in 2020.

On Saturday, the Georgia GOP held its state convention. Trump can’t do everything.

Our delegates to the national committee were elected Saturday.

If you think we need change, join local party, and do it!

We have all got to help in draining our locol swamps, counties, cities, school districts, etc……

notamemberofanyorganizedpolicital in reply to Pasadena Phil. | May 21, 2019 at 7:06 pm

I’m not sure this will mean as much as you think. Whether it’s a desire for approval and adoration or simply the slipping of a mask, judges appointed by Republican presidents have a long and deplorable history of becoming progressives once permanently ensconced on the bench.

This they do, and never the other way around. The reason is legal media and schools. Liberal judges receive praise in Law Reviews and trial advocacy magazines and organizations, conservative judges are ignored, scorned publicly, and even subject to letter writing campaigns within their districts. Liberal Judges are invited for commencement addresses, conservatives never.

Perhaps, but I think something much more fundamental is behind the disturbing deterioration of supposedly conservative judges into progressive ones. Government has too much power, and power tends to corrupt.

Think of the modern progressive state as the One Ring: possess it long enough and you eventually become like Gollum – or worse. Even desiring sweeping government power without actually possessing it (recall the One Ring its influence on Saruman) can be equally destructive.

Progressive corruption is a clear and present risk. However, a common cause in these states is “go along to get along” in order to avoid discrimination, deplatforming, stalking, threats, intimidation, or worse.

‘How many fingers am I holding up, Winston?’

‘And if the party says that it is not four but five — then how many?’

The word ended in a gasp of pain.

I have found the Oblerin case to be distracting, but these judicial appointments are good news. Is anyone looking into ways to remove Obama appointees?

The Senate Republicans can’t worry too much about whether or not Trump’s judicial nominees will move to the left once they get on the bench. There are over 50 nominees waiting for the Judicial Committee to hold hearings, vote, then have the full Senate vote to confirm. Another District Court judge was confirmed Thursday, May 16th, brining to 10 so far for the month of May.

So far, Neil Gorsuch has retained his conservatism. It’s too early to know for sure about Brett Kavanaugh. Both Gorsuch and Kavanaugh had long tours of duty on Circuit Court of Appeals where they established conservative voting records on hundreds of cases. During those periods there was Republican Bush and Democrat Obama – so trying to curry favor with a President who might nominate you for the SCOTUS is a tough thing to do! You might guess wrong: “I think I’ll be liberal, since I think the Dem’s will win the presidency next!” Or I think I’ll rule conservatively, since I think an R will win the presidency!”

All very nice, but really just slapping bandaids on a hemmorhage. It does nothing to reverse the extra-Constitutional role the judiciary has grabbed for itself. When some unelected judge, answerable to no one, can set national policy all on his own authority, we hardly have a government of/by/for the people; we have an oligarchy. An appointed oligarchy, but an oligarchy nonetheless. Appointing a few judges who might—might—turn out to not be left-wing loons is not likely to be an effective long-term strategy.

Until our educational system is taken out of the hands of leftists trying to destroy our society, forget about it.

notamemberofanyorganizedpolicital in reply to TheFineReport.com. | May 21, 2019 at 7:10 pm

I’m convinced if you did research that you’d find 93+ percent of public education administrators are registered Democrats…..

The word ended in a gasp of pain.

Winston Smith Takes It On The Jaw

“The law is what I say it is.” This is why America badly needs Originalists on all levels of every state and district court.