Hillary hasn’t given up on her White House dreams, it would appear. 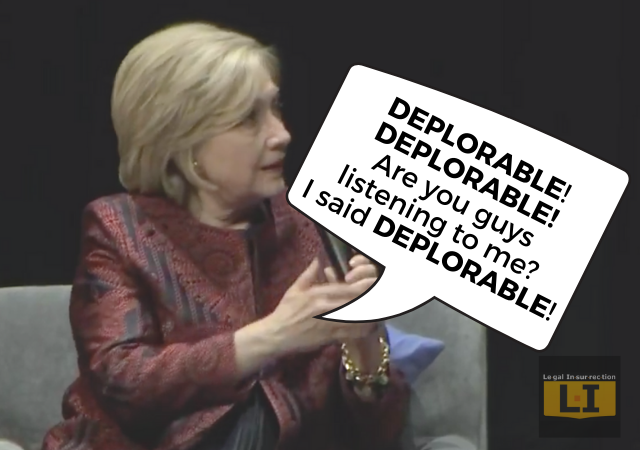 Though she isn’t running for President this time (yet, anyway), Hillary isnt hanging out on the sidelines while the game rages on.

Speaking at an event in Las Vegas over the weekend, Hillary trotted out what’s probably her most famous line — she referred to the last two years as “deplorable.”

“What we have seen over the last several years is truly deplorable,” said Hillary.

Full event here, if you have an hour and a half you’re willing to part with:

“What we have seen over the last several years is truly deplorable,” the 2016 Democratic presidential nominee said to rousing applause.

…Appearing alongside her husband, former President Bill Clinton, in an appearance on their speaking tour, Hillary Clinton took several swipes at Trump during her more than 90 minutes on stage.

She first used the word “deplorable” while speaking at a campaign event in September of 2016. Trump and his campaign quickly seized on the comments and his supporters began to embrace the term.

Clinton also weighed in on the Mueller report during her appearance, saying that it shows “this president obstructed justice.”

“He tried to interfere with that investigation,” she added, referring to special counsel Robert Mueller’s investigation into Russian interference in the 2016 election that also focused on whether Trump sought to obstruct the probe.

In her wide-ranging speech, Clinton also slammed Attorney General William Barr for acting like the “president’s defense attorney, not the attorney general for the entire country” during his testimony last week before the Senate Judiciary Committee.

Hillary has had several inflammatory statements in the past week that have made news. Coincidence? Hardly. Everything she does is calculated.

Hillary hasn’t given up on her White House dreams, it would appear.

A few years ago, I blogged about the late Christopher Hitchens and his assertion that Hillary was running “for therapeutic reasons.” It’s the most accurate summation of Hillary, who she is, how she is, and they way Clinton World operates to date.

Hitchens said, “As for Mrs. Clinton, as for all she’s done for us and after all she’s suffered on our behalf, she feels she’s owed the presidency and who could possibly disagree? Her life is meaningless if she doesn’t get at least a shot and one can only sympathize. Unless you think, as I do, that people should be distrusted, who are running for therapeutic reasons.”

If ever there is an opportunity, even a slim one, you can bet she’ll seize it.

Go away citizen Clinton, and start putting together a retainer for a lawyer at your criminal trial.

Economic prosperity is deplorable to the left.

Apparently, she has no sense of irony.

Hillary and her Two Dollar A Seat speaking engagement.

She’s a Norma Desmond of the present day. Craving for attention. ANY attention. It will never happen of course, but, I would love to hear her say, “I’m ready for my testimony, Mr. Barr!”

Awesome comment. I can picture the look on Gloria Swanson’s face and it IS Shrillary!

Deplorable has been the Clinton legacy.

LOCK HER UP! And let the horndog live out his remaining days doing what he does best.

“What we have seen over the last several years is truly deplorable,” said Hillary.

Yes, Hilliary, it is. Your reaction to losing the 2016 election has been really deplorable!

Hillary’s place in history, first female presidential candidate to lose and the biggest sorehead loser. Her tantrum has been amazing.

Equally amazing is that she and her staff were too stupid to pay attention to Electoral votes. Gross incompetence.

What is deplorable is the Harpy Hag going on and on when no one cares what she thinks or feels.

“What we have seen over the last several years is truly deplorable,” the 2016 Democratic presidential nominee said as she gazed at her reflection in a mirror.

If you couldn’t see an actual person saying these predictable inanities, you might think her words came from a badly programmed AI.

Though it likely makes me a terrible person, dare I say a deplorable, I have to admit that Hillary’s abject misery brings me great pleasure.

This woman argued for decades that her husband’s well-known, serious, sexual misconduct was irrelevant to his performance in office as President.

Then she argued that DJT was disqualified from high public office for daring to talk about what he had observed at Studio 54, and a self-deprecating story about his inability to prevail upon the virtue of a married woman.

No. Just No. That woman cannot be trusted with any aspect of public policy.

I am 66 and I walked away from the office years ago. I enjoy my retirement. Wish Bill and Hillary would do the same.

I am getting up there in age, but I hope to live long enough to Hillary expire.

It’s a good thing for shrillary (and others) that my wishes don’t come true.

When Slow Joe is finally hit with a truth bomb which is just too gross and extreme to just laugh off, the D’rats will send in a Napoleon on a white horse to save the Party from being ground to rubble by Orange Man Bad. There’s some speculation that it will be, perhaps, Michelle who rides in. But I think that Hillary believes it will be Hillary. She thinks she’s still a contender, even if nobody else agrees.

If we just get to know her better, we’ll love her. Forty-plus years in public life isn’t enough.

HRC is deranged and deluded.

She needs to go home and STFU.

No, she needs to get indicted, imprisoned and hanged first.

This “conservative…….is Deplorable”…….Hillary, is “Delusional, warped, twisted mind, & definitely corrupt, to the “N” th degree! { She has more than proved that by her political career}…..so has Slick Perverted Willie….{ Both are “A-Moral”}…..Sociopaths! Both have left a trail of dead bodies from Arkansas, to the White House, both “In, & Out of office”! More than half of America “Knows this”, & yet, she just keeps coming back, for more….{ Einstein, said it best: Doing the same thing over, & over, & expecting different results, is “INSANITY”!….{ DEFINITION OF liberalism, & THE CLINTON CARTEL, SUPPORTED BY MENTAL DEFICIENCIES}

A plague upon the land.

I think Hillarity and Cersei Lannister are pretty much interchangeable at this point.

This is impossible. Her ass is way too wide.

I THINK I WILL TAKE “DEPLORABLE”!