Before his death in 2011, Christopher Hitchens warned about Hillary 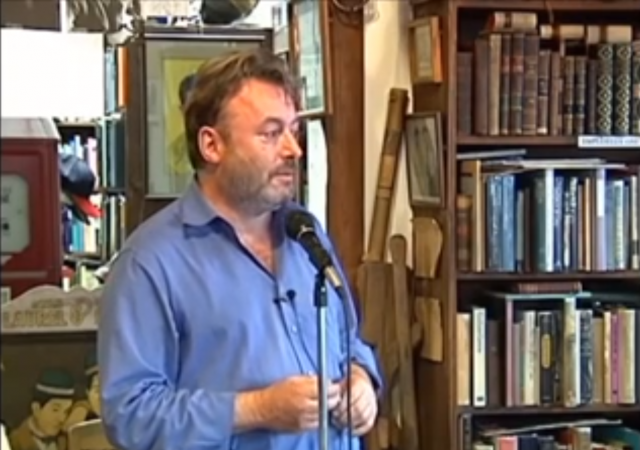 “As for Mrs. Clinton, as for all she’s done for us and after all she’s suffered on our behalf, she feels she’s owed the presidency and who could possibly disagree? Her life is meaningless if she doesn’t get at least a shot and one can only sympathize. Unless you think, as I do, that people should be distrusted, who are running for therapeutic reasons,” said Hitchens.

Hitchens passed away in 2011, but his arguments against electing Mrs. Clinton are even more relevant today in light of her poor performance as Secretary of State, EmailGate, and her relationships with foreign officials who’s interests are not congruent with those of the United States:

Just a few reminders from Hitchens:

“If there was some foreign policy experience or brilliance Hillary Clinton had ever shown, maybe we overlook the fact that she and her husband have never met a foreign political donor they don’t like and haven’t taken from.”

“See if you can bear to read the sort of friendships that a former president is having. It’s undignified to think about it. From the Riady family in Indonesia, to numerous Chinese donors who left this country rather than show up for the hearings, but I don’t know of any such expertise on her part, except her pretense to have been under fire in Bosnia when she had not.”

“Actually, when there was pressure on the Clinton administration to do something about Sarajevo, to stop the killing, to prevent the ethnic cleansing, Hillary Clinton moved in hard on her husband and said don’t you do a thing about Bosnia, it’s spoil my wonderful healthcare plan.”

“At least on healthcare, she knows enough about the subject to have changed American healthcare for the worst, in her time.”

“To remind people at this point of the lowest stage of the Clinton administration when Eric Holder signed off at the Justice Department of the pardon of this fugitive, shall we call him financier, who’d also given a rather large loan that didn’t seem to have been repaid to one of Hillary Clinton’s brothers. Who in turn, with the other brother had gone for a walnut monopoly or was it a hazelnut monopoly in the Republic of Georgia or bits of the caucuses involved in American foreign policy here, plus donations to the Clinton library. It builds up and it goes on. Is this how the president-elect really wants to start?”

Hitch had both Dollar Bill and Ol’ Walleyes nailed. He knew how pathological both these people were, and that was BEFORE the crime syndicate that IS the Clinton Foundation was really revealed.

That’s what psychiatrists, psychotropic meds, and electro-shock therapy are for.

I suggest Hillary try them instead.

Hillary Clinton suffers from Borderline Personality Disorder. Nothing will cure her sickness carcass.

Hitch was spot on about a number things including being against the Islamic Jihad against Salman Rushdie and of course, as mentioned, the Clintons.

Hitch, was way off the mark and petty when denigrating Mother Theresa and Christianity in toto.

Once a well-documented full-blown angry lascivious alcoholic atheist, Hitch no longer has the final word on anything.

Betcha he’s not an atheist any more…

Hillary deigned to “answer “a few questions from general press a couple of days ago about why the guy who set up her server is taking the fifth. Gone was the giddy, cavalier Hillary who makes jokes about servers. She was VERY down, deeply down, depressed. She’s crashing. I think she uses her campaign as an escape from the reality of her brutal and degrading “marriage” to Bill and the degrading treatment of her by her father.

Clinton is a sociopath. She may be depressed, but it’s temporary. A little time – and a few dozen bottles of booze – and she’ll be back to selling influence in anticipation of 2020. Given her crappy health resulting from years of alcohol abuse, she probably won’t live that long.

I think Republicans lost their sh!t over Hillary Clinton since shortly after I got out of college. The red-in-the face routine has been going on so long that Democrats don’t even hear it, any more.

The real argument against Hillary Clinton is that, if elected, she would perpetuate the failed policies of the current administration. We have experimented with the Democratic approach to dealing with a recession, insurance, and foreign policy. We have more data, and it is time to make some changes. We can do better than this.

The Republicans are presenting candidates who demonstrate leadership, whether in business or government, and the candidates who are governors have demonstrated success at the state level in dealing with many of the problems they would face at the national level. The Republican field is strong and capable. There is at least a dozen of them that would make a more effective President than anyone the Democrats are discussing out loud, right now.

You’re a bit confused. No one is red in the face. Importantly, if Democrats had even heard us warning them about the Clinton Crime Syndicate 20 years ago, there wouldn’t be any question of them hearing us “anymore.”

Seriously, if they don’t care that their (potential) nominee is a career criminal, why would they care about bad policies?

“The real argument against Hillary Clinton is that, if elected, she would perpetuate the failed policies of the current administration.”

That would depend on who was willing to pay her how much for what.

Kayne West would be a better president than Hillary Clinton.

West, if nothing else, is a self-made man.

West is a talent-less thug, making money off LIV’s who have no taste in music.

He’d be a bigger racist disaster than Obamayomamma has been.

If Hillary gets elected to the presidency, the nation will need therapy.

I’m gonna throw away this iPad for what it does to my diction sometimes.

Wm, I know you want the ad click revenues, but I’m fed up of the App Store opening when I hit the reply button.

That is a real pain – it doesn’t happen consistently on a PC.

(But it does happen. When it does, there’s no going back to the prior page without reloading website.)

Hillarycare actually became O’Care. She spent Gov. money for staffs to put that together. The last two First Ladies, Pay no attention to the Law of First Ladies NOT having a Gov. job. As Pres., There would be no stopping the ” Lawlessness.” She has never accomplished anything on any Gov. job that she has held. She thinks she is already Royality & the rest of us are Peons.