A Nebraska city is now underwater after reducing its levees to comply with “reconnecting the river to its floodplain” rules. 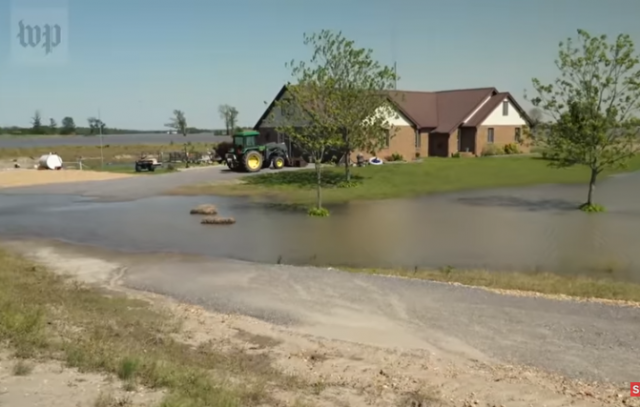 A few weeks ago, we reported on the historic flooding in Nebraska that swamped part of Offutt Air Force Base. The rains have been unrelenting. The Mississippi River has hit flood levels for over a month.

The Mississippi River has been at major flood stage for 41 days and counting, and this week a temporary wall failed, sending water rushing into several blocks of downtown Davenport, Iowa.

In that same area — the Quad Cities area of Iowa and Illinois — the river crested at a new record height. The National Weather Service says a new record appears to have been set at Rock Island, Ill.

The previous area record was set during the Great Flood of 1993 — and as NPR’s Rebecca Hersher has reported, that flood caused some $15 billion in damage.

Davenport Mayor Frank Klipsch says the city had placed temporary barriers to protect against rising water, and a small section of those barriers eventually was breached on Tuesday after holding for weeks.

The damage and deaths (now numbering 4) in the wake of these floods have drawn comparisons to those experienced in 1993. Looking at the developments, one long-term analyst of the flood plains questioned if environmental policies contributed to this disaster.

Joe Herring, a contributor to American Thinker, took a look at data relayed to the catastrophic flooding of the Missouri River basin in 2011. He noted that priorities of the Corps of Engineers, as expressed in its manual related to flood control policies for that region, placed “habitat restoration” ahead of human life and property.

From the completion of the dam construction (in 1967) until 2004, the Master Water Control Manual listed the priority functions in order of importance, with flood control being number one.

In 2004, under pressure from environmentalist organizations who had been lobbying hard for the previous decade, Congress approved a revision to the manual that no longer specifically prioritized the uses of the system, leaving the order of the functions to the discretion of the Corps of Engineers.

The previous list was then essentially upended, with wildlife (habitat restoration, preservation, and imitation of natural cycles) becoming the top priority, and all the others swapping places back and forth depending on the year.

Hamburg, Iowa, a small town southeast of Omaha, Nebraska, experienced terrible flooding in 2011 and raised the heights of their levees. The Corps of Engineers, based on the new green justice values, forced a height reduction of those structures.

“We want our future — with our businesses back and our people home,” Cathy Crain, who has been the mayor of Hamburg, Iowa, for 12 years, tells Here & Now’s Robin Young.

Crain says two-thirds of Hamburg was underwater when the bomb cyclone hit in March, causing flood waters to overflow the levee that protects the town from the Missouri River. Half the town is still submerged from the flooding, she says.

If you thought California has crazy water policies protecting bait fish, then behold the Corps of Engineers’ projects “reconnecting the rivers to floodplains” on behalf birds!

The importance of this concept to the overall goal of “river recovery” can be readily seen in the anthropomorphic spall that surrounds its use, as if the river is a mother cruelly separated from her child, the floodplain, by the heartless brutality of man.

What does “reconnecting the river to its floodplain” mean? Just ask the plaintiffs who recently won a 375-million-dollar judgment against the Corps for causing repeated flooding and enhancing those floods’ severity. The phrase is a euphemism for letting the river flood despite decades of efforts to prevent just that.

Since 2004, the Corps has been notching levees and dikes and re-opening old river chutes, destabilizing the once-shored riverbanks and encouraging shallowing and widening to facilitate the construction of “emergent sandbar habitat” — believed to be beneficial to the endangered Least Tern and Piping Plover bird species and the Pallid Sturgeon, a dinosaur of a fish that somehow managed to survive for millennia without the Corps’s assistance.

We are about to be flooded with assertions that this disaster is the result of climate change. That is partly true…as there was a change in the political climate placing the needs of the birds and fish ahead of the needs of American families.

“Reconnecting the river to its flood plain” sounds like arson, to me. Any resultant deaths would be, at best, negligent homicide.

The negligence is building in a river floodplain, and close to the riven at that. Tossing in a levee along nearly the entire length of it only makes the river move faster during floods, creating more force eroding the levee.

That’s not what was reported, here. Lowering the levees and making vulnerable spots, and deliberately designing to obtain floods, will result in floods.

I think most of the environmental policies are garbage – but a flood plain is best used as a flood plain. Agricultural use remains viable. Levees should only be used to control flooding in urban areas.

The problem is that municipalities want the tax revenue and encourage the parceling and building on flood plains.

A few years back in Australia there was a bid deal made of the property loss in the Murry Darling Basin. During the flood all you could hear about during the floods was Global Warming non-sense. Then the folks that lost homes found out that all their expensive developments are built on the historic Murry Darling Basin Flood Plain. What do you expect?

Look across any coast line, you will see piers built towering above the water. It ain’t for the vista or for diving…

Floods are as regular as the life giving Monsoons of India but they are regular enough.

In England they had the floods because they stopped dredging the canals and rivers on top of removing earthen levies. Homes flooded just as they did when the rivers swelled on unchecked land in the past. What other result could be expected…

Good point – The city of Dallas TX has been trying to get approval of a major tollroad inside the trinty river levees. The tollroad will be under 10 feet of water every three or four years. Along with being build on very unstable soil.

I don’t believe you realize how much of the US heartland would be a flood plain if the Corp of Engineers flood control and navigation plans were not in effect. During the midwest floods in 93 I had a Corps engineer show me what the natural flood plain for the Mississippi River was and the areas subject to flooding if the levee system suffered a major breach. If you look at a map, about halfway between Cape Girardeau and Sikeston, MO you will find a topographical feature known as Crowley’s Ridge. This ridge extends in an arc to Helena, AR where it ends at the Mississippi River. This is the historic west bank of the Mississippi. Part of the Ridge is 60 or so miles west of the current river, and is potential flood plain. This is one section of the river I am familiar with. Agriculture is not a viable use without the infrastructure to support it. Look at the number of towns in that area, the majority of which are based on agriculture.

While looking at your map, find the Corps lock which separates the Mississippi and Atchafaylaya Rivers located upstream of Baton Rouge, LA. If the Mississippi were left to itself, it would now be flowing down a new path through Morgan City, LA and the Ports of New Orleans and Baton Rouge would be greatly reduced, if not history.

I disagree with a lot of what the Corps of Engineers does, but we have too large a population to allow many of the waterways to revert to a natural state.

I fully realize the extent of the Mississippi flood plain and the surrounding rich farm lands.

My nit pick of the day:
POLICIES

One man’s levy is the next man’s flood.

The river nymphs are extremely grateful to the environmentalists and the Corp of Engineers.

The failure of the news to inform us of this strikes me as typical of their gross dereliction of journalism.

This was far more important to hear than the umpteenth breathless story about Mueller’s general uselessness.

I disagree and wish people would stop asking for ‘less Mueller’. What the Dems are trying is nothing short of a coup, the first one in our nation’s history. It’s the largest scandal in 200 years, and it’s still ongoing.

The Mueller saga is just getting good, we’re starting to fight back, hopefully… Tell me all about the indictments and hangings.

notamemberofanyorganizedpolicital in reply to rdmdawg. | May 6, 2019 at 5:05 pm

Dear RDMDawg:
I believe you misunderstood my meaning.

The media helped the coup. If they had refused to cover it, or take Comey’s bait, the whole Mueller thing would have never come into existence.

Meanwhile, Seth Rich’s parents are still waiting to find out who killed their child.

It would be the second coup. The first was the assassination of Abraham Lincoln. Also by Democrats, but who is keeping score.

If you’re going to reconnect a river to it’s floodplain, prior to doing so you should remove buildings and other structures from said floodplain.

Of course- that’s something that was likely never considered as an option.

ahaha you make far too much sense, kiss goodbye your future as a bureaucrat.

Why should they bother to remove structures when they can let nature do it for them due to their rules? It costs them less money (they don’t have to condemn/buy anything) and maybe the persons making the decisions will have moved on when it happens.

It’s a little weird watching greenies who panic daily over the possibility that the ocean may eventually rise a centimeter or so for fear that it may threaten the coastal (flood) plain, insisting that the Mississippi and Missouri Rivers be permitted to flood thousands of square miles of farmland in the Midwest in the name of environmentalism.

What has been allowed to happen in the Midwest is appalling! Greenies are OK with it because it doesn’t affect them.

I grew up in Dubuque, IA in the 70’s. The Mississippi flooded in springtime back then and gee, it still floods in the spring! And guess what? Everytime they developed a plan to prevent flooding, it worsened. Rivers flood, deal with it and quit building next to them.

Levees placed close to a river help create a flooding problem, and they also reduce replenishment of the floodplain surrounding the river. Nature makes rivers flood as part of its system of keeping its house in order, and the bright idea of eliminating flooding entirely, rather than managing here and creates a steady degradation of the whole system. Lowering the levees isn’t the right fix, but it’s something.

I lived in the quad cities for about 15 years, this a nothing burger. the Mississippi is diked/leveed/dammed for almost the entire length, so water that would not make it the quad cities now does, the other thing to consider is the fact how much development has taken place. one more thing davenport, IA is the only area of the Mississippi that does not have a levee or dike(don’t want to ruin the view). in 1993? they had a similar event, they were worried that the Missouri river would take a new path, right through St Louis, MO

Fine. You can help pay the damages to the families of the dead.