Offutt Air Force Base takes a “punch to the gut” as 1/3 of the facility is under water. 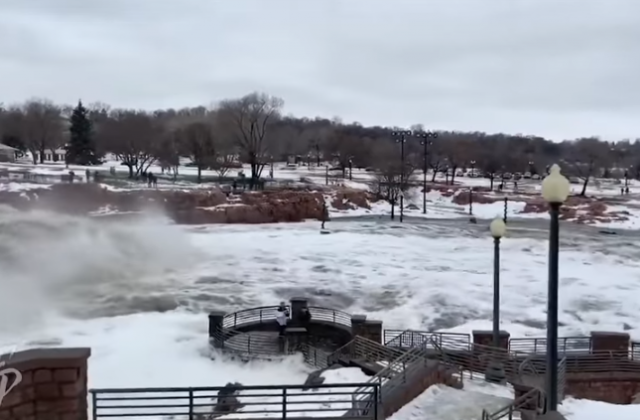 Springtime has roared in like a crazed lion this year as historic flooding is being reported throughout Nebraska.

Flooding has reached record levels at 17 locations across Nebraska.

Nebraska has had much of the worst of the late-winter flooding that’s been seen across the Midwest. Hundreds of homes are damaged and the state says 660 people are staying in shelters.

The Nebraska Emergency Management Agency says the Missouri River is expected to crest Sunday at 41 feet (12.5 meters) in Plattsmouth – 4 feet (1.22 meters) above the record set in 2011. Serious flooding there is expected to continue through next weekend.

Reports have come out that the floods have killed two people so far, and left 300 Nebraskans stranded by the high waters. The levels reported have not happened in the area in 50 years, and have come from rains in the “bomb cyclone” that hit the region earlier this month.

Governor Pete Ricketts declared a state of emergency in 53 counties, saying that one-third of the state has been affected in the devastating floods and 2,600 locals living near rivers were urged to evacuate on Friday.

‘This is the largest widespread amount of flooding we’ve had in the last half century,’ Ricketts said on the deluge.

…The floodwaters from the Niobrara River in the northern part of the state were so strong they blasted through the 90-year-old Spencer Dam dam on Thursday, drowning the local town of Lincoln in water and completely washing out a bridge on US Highway 281.

The flooded Platte and Elkhorn Rivers turned the town of Fremont into an island. Fremont was issued a mandatory evacuation for residents by the Dodge County Sheriff’s Office.

The Missouri River, which borders Missouri and Nebraska reached 26 feet on Saturday – a foot below what’s considered major flooding – but is expected to crest on Wednesday or Thursday at 29.3 feet, according to WPTV.

The Offutt Air Force Base has seen flooding, leaving a significant portion of the facility under water.

Between Saturday night and early Sunday, the 55th Wing called off a 30-hour, round-the-clock sandbagging effort because the floodwaters were rising too fast.

“It was a lost cause. We gave up,” said Tech. Sgt. Rachelle Blake, a 55th Wing spokeswoman.

By Sunday morning, one-third of the base was underwater, she said. About 60 structures have been damaged, most on the south end of the base. No one, though, has been injured.

Video on social media offers a glimpse at the devastation.

This is Highway 12 west of Niobrara. You can see where the bridge was and where it is now (a few hundred yards downstream).

Incredible damage to this area. Keep this area in your prayers. pic.twitter.com/hfBDOVQPjz

STATE OF EMERGENCY: Major flooding is threatening the Upper Midwest with officials declaring a state of emergency in Nebraska where the flooding is reportedly the worst the state has seen in decades. @SamChampion reports. https://t.co/u4JMgIsmhG pic.twitter.com/smUSHvTiXR

Offutt — a critical US Air Force Base in Nebraska — is flooded, with 30 buildings ‘completely’ inundated https://t.co/zh6AuUPL38 pic.twitter.com/whG7KAF0wa

Prayers-up for the good people of Nebraska to stay safe until the waters recede, and to recover quickly from this disaster.

I guess when you have all that snow being dumped on the country its gotta go somewhere when it melts!

What really gripes me is that you know all of the Eco-warriors will be jumping on this and saying “It’s proof of climate change! Proof Of Climate Change!!!” No, you idiots! You were saying we were going to have droughts, and it was going to be oh so hot, and everything was going to burn up – well guess what, the exact OPPOSITE of everything you predicted happened! It got incredibly cold, and we had an incredible amount of precipitation, and now it’s melting.

They have loved to set themselves up so that no matter WHAT happens, they can say “It’s climate change, it’s climate change!” It’s a completely disingenuous pack of lies, that’s what it is.

If it wasn’t for LI I would not have known about this. I never watch cable news, so maybe they are covering it. The media doesn’t care, I guess.

Prayer to those great people in Nebraska. I saw some talk on other sites it’s calving season which makes it even tougher.
I’ve been stuck in Nebraska during a blizzard that shut down the interstate for a day and a half. Coming home I missed the ice storm by one day.
Some really tough weather happens in the upper western plains.