Milano: “JOIN ME by not having sex until we get bodily autonomy back. I’m calling for a #SexStrike” 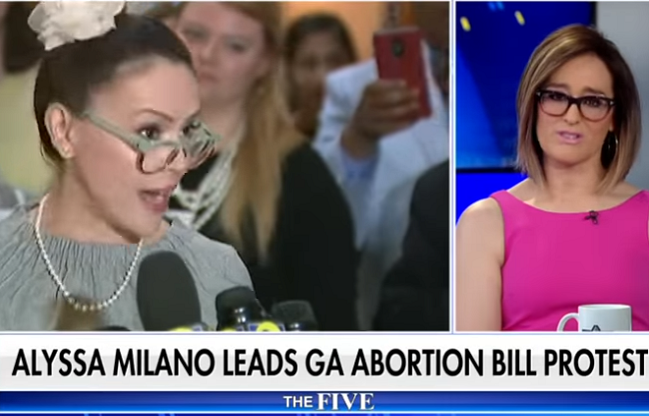 In the fevered mind of actress turned political activist Alyssa Milano it makes perfect sense to advocate a #SexStrike to protest Georgia’s new “heart beat” law.  Without any hint of irony, she claims that women “cannot risk getting pregnant” and should withhold sex “until we get bodily autonomy back.”

Never mind that the aging actress is 46 years old and therefore not exactly in her child-bearing prime, she wants women to “join her” in this sex boycott.

Alyssa Milano, one of the leaders of the #MeToo movement, is taking a different approach to battling the so-called “Heartbeat Bill” anti-abortion bill recently codified in Georgia, with similar measures under consideration in other states.

In this case, Milano has advocated a #NoMas approach, calling on women to refrain from sex while their rights to their own bodies are at issue by state legislatures.

“Our reproductive rights are being erased,” Milano said via Twitter. “Until women have legal control over our bodies we just cannot risk pregnancy. JOIN ME by not having sex until we get bodily autonomy back. I’m calling for a #SexStrike. Pass it on.”

So far, the tweet has won strong approval (although the demographics of supporters weren’t broken out), generating more than 10,000 likes and 4,000 retweets since its apperance [sic] on Friday. #SexStrike was also trending on Twitter Saturday.

Naturally, the left is in ecstasy over this bizarre effort.

Personally, I don’t have a problem with women choosing not to have sex, particularly those who might use abortion as birth control, but I imagine that Planned Parenthood would beg to differ. An idea not lost on a lot of pro-lifers.

Does anyone else see the irony in calling for a #sexstrike to gain choice regarding unintentional pregnancies?

I fully support this pro-life cause.

Wait this is such a good idea. Don’t want to get pregnant… don’t have sex. It’s almost like it was……. designed that way?

Seriously, I don’t get the downside here.

Pro choice feminist: “If we can’t kill our unborn babies anymore, we won’t have sex anymore!”

Pro life conservative: “Wasn’t that the idea all along? It’s working!”

But wait, one of her fans sees a loophole here.

Only for Republican men. The men who are supportive to women’s rights are excluded. I’m lucky to have one of those.

Apparently, that’s a thing, too.

Don’t let them anywhere near you. Give them the hand and keep it moving. Get a B.O.B. But make it a rule to run, not walk, from men who want to steal your agency over yourself & your life.

Jessica Valenti, perhaps sensing the corner Milano had painted herself into, has let the actress/activist know she’s not on board with that particular movement:

This about covers it https://t.co/RxL2MQuivG

The idea of a #SexStrike – where sex is something men seek and women withhold – is the same regressive model of sexuality that Republican men use to legislate! No thanks. To be fair, Milano is an actress-turned-activist, so she can’t be expected to entertain logic or understand issues in any meaningful way. “Hey, let’s not have sex, that’ll show ’em” is likely the closest thing to critical thinking she can muster because it seems that like the majority of the far left fringe, she’s all about knee-jerk, foot-stomping, emotion-based acting out.

A sex strike is a good idea. I solemnly swear I won’t stick my bazinga into Milano’s crazy.

I’m all for liberals voluntarily reducing their reproduction rate.

Did anyone else hear that odd noise? It was the collective sigh of 100,000 50+ year old Star Trek/Wars cosplay nerds. :::sadface emoji:::

That is one woman who will never be able to control her body…er mouth.

This is a big win for the gene pool.

If I find a bunch of very attractive women protesting outside my house, I’ll be disappointed, but quite flattered.

She’ll change her mind as soon as the infection clears up.

There really is a word to describe these people: it’s “dunce.”

Used to think “ignoramus” did it, but after Alexandra Cortez, it really is “dunce.”

The dangerous thing is they’re on a religious-like mission to destroy our way of life.

“What if Alyssa Milano called for a #SexStrike and no one came?

Neither. Milano is repulsive in her own right, but you have her confused with Bourdain girlfriend Asia Argento. Milano was friends with Argento, who was also an early and (I guess, though I’d never heard of her) prominent #MeToo proponent, but Argento was subsequently accused of some kind of sexual assault against a 17-year-old male.

So we should pay attention to someone whose claim to fame is that she was cute 50 years ago?

Alyssa Milano
“Our reproductive rights are being erased.”

Ummm…no. Your unmitigated ability to kill unborn children is being modestly impeded.

Actually her “reproductive rights” are more likely limited by STDs or damage from too many abortions!

Wow, that is one messed of attention seeker.

Some things she should consider:
1. There is more to a relationship than sex
2. I think there are more than enough women that will fill the gap including the 500 K plus illegals coming in
3. The only people she is going to hurt is liberal men (so go for it girl)
4. There are going to be some real nasty women and it is not the men they are going to be mad at.

I mean what is going on here. Is she feeling guilty about something she did? I followed Globelamp tweet and that is one women with some real messed of views about men. She must only know a bunch of creeps or perverts because if that is her view of men, her narrow mind is paper thin.

I’ve said it before, and I’ll say it again: Conservative men are the only ones worth their salt. Real women don’t want anything to do with weepy, whiny pajama boys . . . who will be thrilled not to be stressed for sex by their domineering overladies. This will give them more free time to focus on finger-painting and cowboy poetry jams.

Meanwhile, leftie women are ridiculous hypocrites when it comes to men and sex. Remember all the Occupy rapes? So many that they had to set up “rape tents”? They didn’t want word to get out because it would “hurt” the movement or something.

Remember all the Tea Party rapes and rape tents? Yeah, me, either. Conservative men don’t act like that, and conservative women wouldn’t tolerate it for one second if they tried, let alone remain silent . . . though we may reserve that right should it become necessary 😉

I guess she does prove that abortion is about birth control and not a medical necessity.

Any “Cis male” that has sex with a woman that labels him that, deserves everything he gets!

A boner has no politics – or conscience. Fortunately, most of her ilk are so personally unattractive that the subject never comes up.

Never heard of her.
Who is she, and why should I care?

What do mean? She’s a genius.

At being a fool.

Give them the hand and keep it moving.

That one is either sabotaging the strike or not thinking straight.

Sex as Bill Clinton defined it?

If I knew how to start a Twitter hashtag, I’d set up #GotBatteries? for the woke womyn participating in the sex-out.

Weren’t they already on sex strike over guns? I seem to recall that.

My attempt at Cowboy Poetry:

“(Yes, Dear.) Where the deer and the antelope play…”

(“That reminds me — You need to pick up all that deer poop in the front yard.”)

“(Okay, Dear.) Where seldom is heard a discouraging word…”

(“You don’t seriously think you can sing, do you?”)

“(Of course not, Dear. You’re the one with the voice in this family.) And the skies are not cloudy all day.”

Is Milano an advocate for selective-child, recycled-child, or a general progression of Planned Parenthood?

Ah geez Alyssa, you can go on a sex strike. The likelihood of me–your average white male deplorable — ever getting any sex with you approaches zero to the 20th power.

I see it’s being reported that Bette Midler is mercifully joining the strike.

Her poor husband who has to listen to her.

Planned babies on back order. A positive development.

Abstention is the first choice. Prevention is the second choice. Still, #SexStrike is not abstention, it’s prohibition. #HateLovesAbortion

Milano is a walking poster child for untreated mental illness. She is entirely insignificant.

Not so familiar with her myself. Checked IMDb. It lists her filmography spanning from
1984 through present-day, with a considerable amount of her work in TV series. I don’t watch but very little of the new stuff when it comes to TV and movies.

Milano played the cute kid on that 80’s sitcom with Tony-whats-his-name from Taxi…I think the show was called “Saved by The Boss”…???

Then she was on that show where she played a witch or a spy or a cop…or maybe it was a Jehovah’s Witness who was looking for a one armed man….
(I forget)

Now…she pretends that she knows what she’s talking about…
(That’s acting…isn’t it ????)

How does a woman without autonomy over her body withhold sex?

Alyssa is no longer giving it away. Men over 60 hardest hit.

Without screwing her way up, how is kamala harris going to get ahead?

Maybe bezos could give her a ride. He seems to be hanging out with sluts these days, since he blew his marriage to that gem he first married.

If women didn’t believe the lies of “radical feminism” and the “sexual revolution” and saved having sex for marriage, this wouldn’t be that big of an issue.

If you only had sex with someone who loved you enough to marry you first, the idea of a #SexStrike for political purposes would seem totally preposterous!

I feel sorry for people like Alyssa Milano. She is obviously hanging around with the wrong kind of men!