Sorry, Schumer. Stacey Abrams Decides Not to Run for Senate in 2020

Sorry, Schumer. Stacey Abrams Decides Not to Run for Senate in 2020

Abrams will “continue to watch how the national conversation around the presidency unfolds” and she has not taken herself “out of that conversation” of a possible presidential run. 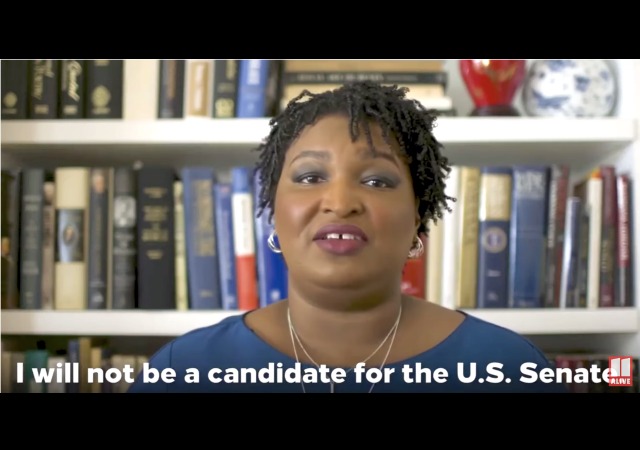 It didn’t work as Abrams announced today she will not run for the senate in 2020.

From The Atlanta Journal-Constitution:

“I’ve been deeply honored by so many fellow Georgians asking me to serve,” she said in an interview. “But my responsibility is not simply to run because the job is available. I need to run because I want to do the job.”

It triggers a new phase of the Senate race, which has been slow to develop while Abrams has deliberated. She plans to stay neutral in that contest, which so far has attracted one candidate who said she would run only if Abrams does not.

And it opens a new round of scrutiny over whether she will join the growing presidential field, or emerge as a White House hopeful’s running-mate, a possibility that heightened after she delivered her party’s rebuttal to the State of the Union.

If she doesn’t make a White House run, Abrams is likely to prepare a 2022 rematch against Gov. Brian Kemp, who bested her by about 55,000 votes in a contest marred by allegations of voter suppression. After 10 days of legal wrangling and vote-counting, Abrams ended her campaign but refused to call it a concession.

I am grateful for all the encouragement I received to run for U.S. Senate, and I’m committed to doing everything I can to help elect a Democrat to that seat next year. #gapol pic.twitter.com/5o14BqgqwO

Abrams met with Schumer numerous times and he picked her to give the Democrat response to President Donald Trump’s State of the Union. The media has given her plenty of attention to keep her in the limelight.

Rumors swirled in March that Biden sought out Abrams as a running-mate to show he is not “just another old white guy.” The two of them had lunch in DC in early March at the request of Biden. Neither one provided details of said lunch.

Some on the left celebrated the idea while others criticized it. If he decides not to pick Abrams the left will probably scream RACIST at him. On Twitter, people have said that Biden is using Abrams. Others have made it seem like his argument to pick her to not look like “another old white man” is not working.

A week later, Abrams dismissed the possibility of running with Biden as she told The View that if she runs for the White House it will be as a presidential candidate. One advisor expressed disgust over the rumor because Biden didn’t endorse Abrams in the governor’s race and now he wants her to save him in the Democratic primary.

Abrams has not counted out a presidential run since she told the Associated Press that she will “continue to watch how the national conversation around the presidency unfolds” and she has not taken herself “out of that conversation.”

How regrettable. Maybe she can find some time to walk up a flight of stairs or even out to the mail box.

The only running she should do is on a treadmill.

notamemberofanyorganizedpolicital in reply to NotKennedy. | April 30, 2019 at 1:44 pm

What a Loss to the Democrat-Communist Party.

The Friendly Grizzly in reply to notamemberofanyorganizedpolicital. | April 30, 2019 at 1:49 pm

Or, they need to come home and roost.

And, those are her good points.

I don’t understand why this corrupt clown won’t go away.

The same reason a motorcyclist with loud pipes won’t go away: They crave attention. “LOOK AT ME!”

Loud pipes, they claim, are a safety feature. I don’t think that would help Stacey Abrams.. Maybe an orange triangle on her back?

“Maybe an orange triangle on her back?”

Yes, a guy with loud pipes wearing shorts, a wife beater tee shirt and flip flops is always all about safety.

You are missing a great opportunity for some fun if you don’t carry ear plugs to offer them.

And in Florida, he doesn’t even have to wear a helmet!

Lots of reasons: inter alia, she is fat, black, female, self-righteous, and sanctimonious. Thus, she is a prime candidate for the dems.

Democrats are now subpoenaing records of the Trump grandchildren.
https://www.thegatewaypundit.com/2019/04/complete-madness-democrats-subpoenaed-trumps-grandkids-personal-records-video/
I think they have gone so crazy that all decency and perspective have been lost.

Oh Lord, the hubris of this woman. She lost by 50,000+ votes and she still hasn’t conceded. All she can do is trot out the usual progressive tropes of “voter suppression” and “racism.” The people of Georgia must be embarrassed. She’s morbidly obese… how can someone who can’t even take care of her own health be deluded enough to think she can lead others?

If the goalposts were as wide as the gap between Stacey’s teeth, the Colts would have advanced in the playoffs.

It’s amazing how people like Stacey and Robert Francis, who lose state elections, want to run for president.

Pitiful that these are a couple of the choices even thinking of running for President. Stacy and Beto the fake Mexican.
Sheesh.
America has lost her intelligence and we’re stuck now with romper room idiots running for President.
Honestly I’d vote for Dan Crenshaw over DJT. I’m awed by the guy and his intelligent and compassionate responses. He’s only going to get better as each year goes by.

What a lucky break for Georgia and the rest of America. Another bitter loser decides not to run for the next office. Maybe she should take some personal finance classes and get her finances straightened out before she wades into the next election to show her lack of prowess with math.

I heard she doesn’t want to resign from her imaginary governorship to run for an imaginary senate seat.

And I was looking forward to the fat, gap-toothed, racist socialist running!

Abrams states, “Public service has been a calling for me.” Translation: I have no useful skills to work in the private sector.

She failed at practicing law and her factoring/shylock business so she is desperate to become a lifetime toughfeeder to lock in a salary, benefits, and retirement plan. I don’t expect her to fade away into the private sector and do something straightforward and earnest.

The race against Perdue will be mild compared to the race against Isakson’s seat. Johhnie is sick and will probably not make out the whole term. So Kemp will get shot at the replacement nominee. That will be the real race.

Johnny looks like crap in person. He is hunchbacked and hobbling around, and he had a major surgery on his back some time ago after I saw him in that condition. He should have retired already and let someone younger that can do the job and make a contribution win it.

I can safely predict that she will be arrested for something, it is only a matter of time.

Stacey Abrams is still holding out to be Benevolent Dictator

She knows that she cannot work in a body with 99 other members that have the same status as she. She only wants a position of power over others and a governor or president would satisfy that desire. She is an authoritarian and a loud mouth bully. When she lost here in GA she had so little class as to claim she actually won but was cheated out of her victory. If ever one person exemplified the Demorat party she is it.

If Biden wins the nomination she will be his running mate. Bank on it.

Even Biden can outrun this bowling ball on twigs. Maybe he can glue a donut on a stick to her head to keep her moving.
…Actually from the snark, this woman is a dangerous running partner. She is corrupt and could not be trusted particularly if in office. Her ego goes well beyond her ability, except her ability for backstabbing.

The internal polls must have been brutal…

Maybe Stacy should simply go get a real job, pay off her massive debts and join Weight Watchers. And one more thing, STFU and GO AWAY.

Were she and Proposition Joe separated at birth?

I’m weary of the word “conversation”. It’s as though we are ignorant, and we must “have a conversation” about what they deem is important. As though we don’t know how to think or talk at their elite levels.

Only lost by 50,000 votes? If harvested ballots, fraudulent, illegals, dead people, motor voters, and ineligible voters were subtracted she lost by 150,000 votes.

who? never mind, don’t really care who she is.

the dog barks and yet the caravan continues on….