China is no longer the cheap solution for environmental virtue signalers. 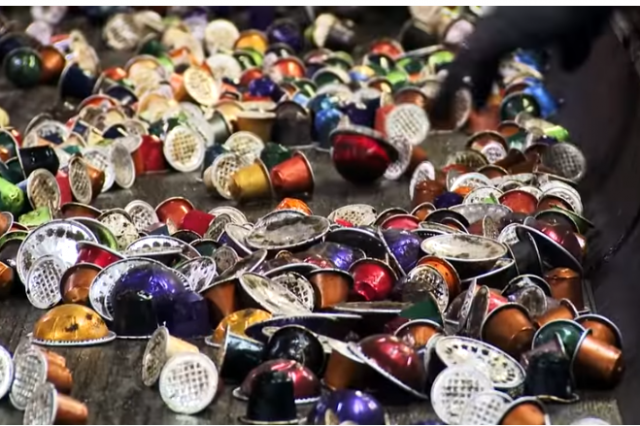 Communities across the nation have promoted the virtues of recycling, and millions of Americans have dutifully segregated their wastes to “save the planet.”

However, now many of those programs have started to end because of escalating costs.

Philadelphia is now burning about half of its 1.5 million residents’ recycling material in an incinerator that converts waste to energy. In Memphis, the international airport still has recycling bins around the terminals, but every collected can, bottle and newspaper is sent to a landfill. And last month, officials in the central Florida city of Deltona faced the reality that, despite their best efforts to recycle, their curbside program was not working and suspended it.

Those are just three of the hundreds of towns and cities across the country that have canceled recycling programs, limited the types of material they accepted or agreed to huge price increases.

“We are in a crisis moment in the recycling movement right now,” said Fiona Ma, the treasurer of California, where recycling costs have increased in some cities.

Prompting this nationwide reckoning is China, which until January 2018 had been a big buyer of recyclable material collected in the United States. That stopped when Chinese officials determined that too much trash was mixed in with recyclable materials like cardboard and certain plastics. After that, Thailand and India started to accept more imported scrap, but even they are imposing new restrictions.

China has become an additional component in the equation because the country used to be content with having a large population of low wage workers. Apparently, the Chinese now aspire to have better quality jobs. It seems the Asian giant no longer wants to purchase American waste.

“In the Greater Boston area, 80 to 90 percent of our material had gone to China,” says Gretchen Carey, president of MassRecycle, a statewide industry organization.

She says the price for mixed paper, for instance, has dropped from $75 a ton to less than $5. The shift, she says, “basically took our entire world and shook it like a snow globe.”

The global glut of recycled materials has turned local municipal budgets upside down. Massachusetts cities and towns, which are are required to recycle household materials, are now scrambling to pay for something that used to turn a profit.

The US has opened up more oil resources, which has helped lead to the end of recycling:

…[R]ecycling is also expensive and time-consuming. It requires a tremendous amount of water and energy, in addition to money and effort to build the proper infrastructure. Due to the falling costs of oil prices, virgin plastic is actually cheaper to make than using recycled materials.

I would like to think that part of this trend is related to the fact Americans are more wary of blindly following the latest eco-activism dictates. In a wonderful analysis, libertarian pundit John Stossel reviewed the facts and data behind recycling. He concluded that, with the exception of recycling aluminum cans, recycling was a waste of resources and energy:

* There are plenty of landfills.
* Recycling glass is reclaiming sand, which is a very common resource.
* Shipping the materials to a recycling center requires far more energy and resources (e.g., more trucks, more gasoline).

There have been so many environmental “facts” that have turned out to be fallacies. Clearly, recycling isn’t the solution that was originally touted.

Perhaps, if we can encourage China to landfill its plastics efficiently, there will be an effective solution to the plastic pollution “crisis” in the ocean.

I’ll believe this is true when I see it in Seattle and Portland.

In my perfect world, Oregon should have strongly curtailed the bottle deposit bill instead of expanding it. Make AL and glass no deposit as we now have curbside recycling whereas it didn’t exist when the bill was put in place. By raising it to a dime, they simply doubled the amount of money available in the homeless recreational heroin and meth market. A week before it took effect I asked some firemen if they had added more narcan to their kits for when it goes to a dime, and you could just sense the horror I had put into his head with what the future held for them. But for plastic water bottles, make it a quarter each, and take them off of the EBT system where people buy 6 cases of 24, empty them in the parking lot, run them through the machine, and then buy a 6-pack and a pack of cigs with their new-found $14.40 The bottle deposit programs are just a thinly veiled tax, as a deposit not easily returned in effect becomes a tax.

The Oregon bottle bill as enacted and signed into law by Tom McCall back in the day had everything to do with littering control and nothing to do with recycling, which didn’t really exist at the time. As an anti-littering device it worked well, and was still working fine when they raised the deposit from a nickle to a dime, so there was no justification for raising it.

At any rate, when it comes to curbside recycling, liberals who run everything in Seattle, Portland, and much of California, have put it firmly into place as an exercise in mass virtue-signalling, which they really cherish, so I doubt they’ll they be doing away with it anytime soon.

In 2015, California collected $1.2 in deposits, but only $1 billion was redeemed. So the state made $200 million on the program. That’s probably incentive enough for the state to keep raising the deposit amount.

I taught environmental engineering for 37 years, and one topic always considered was recycling. If there is a single number that best indicates total environmental impact (negative) it is total cost. The fact that recycling is more expensive than mere landfilling indicts the practice. Another good indicator is whether people will pay you for your recycled material. Except for aluminum cans, the answer is always no. You are expected to subsidize recycling with free labor and free materials.

The best single reference on solid wastes is William Rathje’s “Rubbish: The Archaeology of Garbage,” Harper Collins, 1992. Buy it; read it.

May I assume that the burning of the recycled materials is done these days in a way that doesn’t spew a lot of toxins in the air? As I recall (and perhaps Bob Sykes can respond) this was always a concern with incineration.

Also, I was under the impression that glass and steel still could be recycled profitably, even as the economics of plastic recycling was always iffy. Very interesting to see that this too has changed.

Burning is one way that “toxins” enter the atmosphere. Decomposition involves oxidation, a kind of slow burning, only it can’t normally serve to heat houses or water. Recycling is dumb all over.

I just took my Subaru Outback in for its annual emissions test. It passed, but it occurred to me that it would be far more sensible to bring in my cow, if I had one, or a buffalo, both of which contribute far more “emissions,” both anally and orally, than a Subaru, for which I’ve never even needed a pooper scooper.

The best and cheapest kind of recycling is repair and reuse.

We now routinely produce large products — automobiles, appliances — that don’t rust or deteriorate. The next obvious step is to make the components that age or break easily replaceable.

Ordinary people are doing their own repairs. Online parts stores are flourishing. The websites are designed to help non-professionals find parts. There are appliance parts sites that have Hollywood quality videos showing exactly how to replace specific parts.

Plastic and paper should be burned for their energy. The only reusable plastic is soda bottles, and the only product is polar fleece.

As all things go, the topic of recycling and separating are two animals. When I was growing up on the farm, we separated our trash into: Things that will burn, Steel cans, aluminum, throwaway glass, reusable glass (mason jars/etc) and newspapers. Organics were for the garden or the pig pen. I think we generated about a barrel of tin cans and scrap over five years, while the rest went to the respective places.

Plastics are mixtures of things that cannot be separated. The only use is burning for energy.

Penn and Teller had a great Bull–it! episode (Showtime) on recycling and the fallacies around it, basically outlining everything Stossel is talking about. Back in 2004. ohnly took 15 years for others to start catching up.

Green through shared responsibility, through obfuscation, through indoctrination. Green by perception, ironically naive by nature.

That said, what can we do individually and collectively for conservation? Removing the first-order forcings of developmental misalignment is a good first, baby step.

I second pwaldoch: Find the full episode of Penn & Teller’s “Bull$$$$!” episode on recycling. Definitely worth a watch.

Here’s a clip; we can all agree that lightly-soiled toilet paper should be recycled. Can’t we?

I hate the thought of throwing plastic away. It sits in a landfill or blows around Mother Nature for years and years. I don’t buy bottled water unless on a trip or vacation for convenience and then make sure I get them into a recycle bin or reuse them numerous times. I guess there’s a cost to everything though. If recycling becomes too expensive, I guess minimize using as much plastic as you can (which is getting harder and harder to do).

Honolulu has had for decades a facility that separates metal and glass out of waste and burns the rest for energy. Interestingly enough, the facility was not put in place initially as a recycling effort, but as an energy plant.
There is still a strong aluminum market, however the manner of the current urban recycling methods makes recovery more difficult, not less. Previously aluminum cans and objects were collected and taken to the Reynold’s aluminum recycling planr where it was weighed and a check or cash generated. At about a penny a can, you never saw one lying about for long as it was ready money for the elderly and poor.

I’m old enough to remember when the elderly would save up all their “pop” bottles and call over neighborhood kids to return them for the two-cent deposit.

I use to take bottles and papers with my siblings for money. Load up the red wagon.
My brothers friends would try to step on the scale. I think we all did.

Remember fellow African-Americans: the Republican Party freed the slaves. The democrat party was the party of the Ku Klux Klan.

The bombing of Japan with the Nuke

Thank you President Truman, otherwise up to 1,000,000 men, including my father, who served in Pattons Third in Europe and had orders that he would be joining the assault after Hitler was destroyed, would have likely been killed otherwise…
Horrible thing, but Japan knew ahead of time, refused to surrender, even amazingly after the first bomb

Politicians are both the world’s stupidest businessmen and its greatest grifters. They continually spend huge amounts of money on projects which are worthless to their constituents. At the same time, they are able to direct the funding for implementing these programs to friends, relatives and, in some cases, themselves. Whenever a politician backs a particular program, you can bet that it will produce negligible positive effects and cost constituents a bundle of money. The best public program is the one which has to be fixed or redone periodically, at ever increasing cost to the taxpayer.