Legal Insurrection has its own, special celebration! 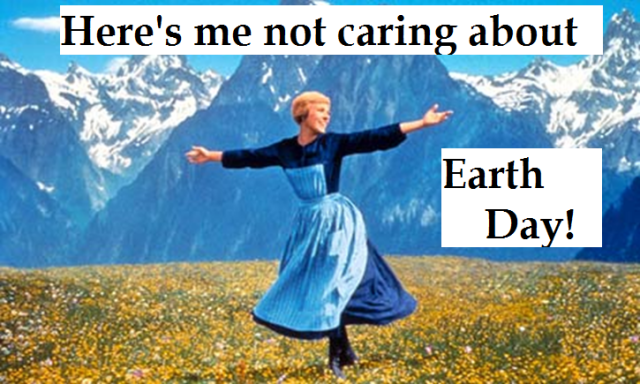 Brace yourself: Green justice warriors will be out in force this Sunday. It’s the 48th anniversary of Earth Day.

Every year since 1970, we have been treated to self-righteous, humanity-deriding antics of environmental activists . . . who usually leave mountains of garbage behind after their celebrations of Earth conclude.

This year’s theme will be the War Against Plastics.

Many of us use or encounter plastic every single day, even if we don’t realize it. There’s single-use plastics, such as bags, bottles, plates, utensils and straws. But there are also plastics in our electronics, cars, clothes and paint.

So what happens to all this plastic? Some of it gets recycled. But a lot ends up in landfills or is simply littered as plastic pollution, which gets into our waterways.

Plastic is made to last forever — it cannot biodegrade. Disposed plastic materials can remain in the environment for up to 2,000 years and longer, according to a 2009 article published in scientific journal Chemistry & Biology.

Earth Day Network has called the management of plastic waste a “global crisis.”

In the wake of low temperature records that have been smashed across the Midwest, it appears that the “Global Warming” crisis has ended, so this new, plastics-based drama will replace it. 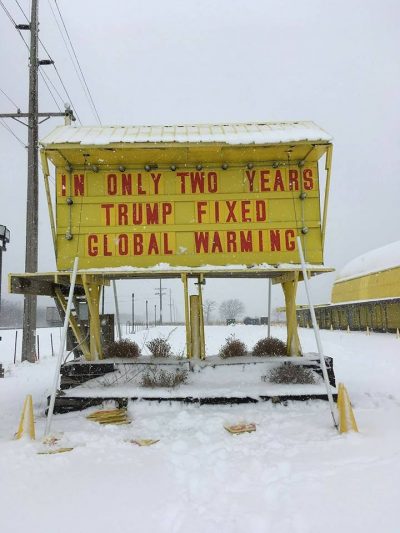 We have our own “Earth Day” traditions at Legal Insurrection! We start our commemoration by pointing out the fake science behind the latest green justice crusade. David Mastio, the deputy editorial page editor of USA T0day, has some intriguing data about the actual hazards associated with plastics pollution.

It was the peer-reviewed journal Scientific Reports that revealed the “Great Pacific Garbage Patch,” in the words of National Geographic, is “mostly abandoned fishing gear” and debris from the tsunami that hit Japan in 2011.

Plastic-loving David Mastio isn’t the guy who says Asian countries are destroying the world’s oceans. The environmental activists at Ocean Crusaders point the finger at China, Indonesia, the Philippines, Vietnam and Sri Lanka as the countries that dump the vast majority of plastic showing up in our oceans.

It isn’t the plastics industry that says burning old plastic for energy and getting developing countries to do a better job of putting trash in landfills are better ideas than plastic bag bans or disposable straw restrictions. It is the Ocean Conservancy and the McKinsey Center for Business and Environment.

It would be great to “End Plastic Pollution,” as the Earth Day folks advocate, but while we do it, let’s keep the facts straight and keep one thing in mind: “Most advances of human society over the past century have been facilitated by the use of plastics.”

No Earth Day celebration at Legal Insurrection would be complete without reminding everyone that Ira Samuel Einhorn, known as “The Unicorn Killer” and a self-proclaimed founder of Earth Day, is an American environmental activist convicted of murdering his ex-girlfriend Holly Maddux . . . then composting her body. Here is a detailed look at the case:

Finally, on this day, Legal Insurrection likes to commemorate an action or policy that actually helps make the Earth greener and safer for all of God’s creatures . . .including humans. This year, the winning entry is President Trump’s “Start of the Deal” ending the nuclear threat posed by North Korea.

Happy Earth Day, 2018 . . .Legal Insurrection style. Here’s to hoping it is a good one for you, and as free of Green Justice Crusaders as possible.

To celebrate Earth Day this year, earlier today I went to the shore and put plastic ring holders for soda cans on all the seals I could find.

Then I clubbed them all.

You could make a pink pussy seal fur hat

I’m so glad Leslie posted this and that you celebrated Rdmdawg.

Darn, here I thought May 1 was “earth day.” Guess I have it confused with some other Communist Holiday.

I bet none of them had been to BUD/S. You didn’t go to Coronado. Or the Big Island.

“the urge to save the world is always and everywhere a false face for the urge to rule it.”

The entire Green movement is like a watermelon: Green on the outside, Marxist red on the inside.

I believe we are all in agreement.

notamemberofanyorganizedpolicital in reply to Arminius. | April 23, 2018 at 6:44 pm

You all nailed it!

Leftists want to evilly control others – when honestly Leftists have no control over themselves individually.

“Plastic is made to last forever — it cannot biodegrade.” What a crock. Left out in the sun, UV radiation from the sun breaks the bonds between the polymers and makes them just “mers”, which fall apart.

It must be that newspaper people either have a different definition of composted or (more likely) could not resist the ability to use the word “composted” when it comes to someone associated with Earth Day. The NBC News article and the Wikipedia page both mention a mummified body in a trunk in a closet packed with Styrofoam pellets, air fresheners, and newspapers.

What granola eating hippie or gardener would describe that as composted? I would bet not a one.

My verdict, not composted, rather simply concealed in a trunk.

Here is to hoping that the author of this article reads these comments prior to composing an Einhorn callback next year.

“Ira Einhorn was on stage hosting the first Earth Day event at the Fairmount Park in Philadelphia on April 22, 1970. Seven years later, police raided his closet and found the “composted” body of his ex-girlfriend inside a trunk. ”

Granted, it is NBC…the originator of much #FakeNews.

I am sure that a year of reflection will allow the context of the use of the word to become fully composted because I am sure nobody on our side of the fence would want an incorrect assumption to become “partially mummified” among our fellow readers.
That would be bad, m’kay?

Peace! (Note: Not in scare quotes.)

These are classics: 13 Worst Predictions Made on Earth Day, 1970 from Freedomworks. My favorite:

“The world has been chilling sharply for about twenty years. If present trends continue, the world will be about four degrees colder for the global mean temperature in 1990, but eleven degrees colder in the year 2000. This is about twice what it would take to put us into an ice age.” — Kenneth Watt

Kenneth Watt is still a professor at University of California, Davis.

Well, he may have been right, just off by a few decades. This year certainly feels like it. I’m dreaming of a white Mother’s Day? He couldn’t have predicted the warming of 1980-2000, which put a delay in the long-term cooling trend.

Yep, the 13 Worst Predictions Made on Earth Day, 1970 were all made when leading scientists were predicting global cooling.

Here is my prediction: Earth day is just a 9 day head start to the beloved May Day celebrations. Same groups and ideology.

I think I’ll celebrate by going out to my range, and touch off a few dozen rounds.

Happy Birthday Vladimir Lenin, born 22 April 1870. Earth Day 1970 celebrated the 100th anniversary of that tyrant, and we continue to celebrate the anti-capitalist foundation of Earth Day every year since.

Happy Birthday Vladimir Lenin, born 22 April 1870. Earth Day 1970 celebrated the 100th birthday of that tyrant, and we continue to celebrate the anti-capitalist foundation of Earth Day every year since.

The thing that annoys me about the enviros is that they are nearly all confirmed non-science, non-math majors who refuse to educate themselves. They have squandered the substantial good will of normal people and people with technical degrees by espousing unscientific, counterproductive policies. It’s a shame.

They should be celebrating the progress we’ve made, and solidifying good habits instead of pretending the world is going to end.

Enviros are the root problem with the EPA, which accomplished its environmental goals, so they decide to push for bigger and better things, and lit on controlling nonpolluting gasses. Of course, this was done at some expense, principally at maintaining our water clear of known pollutants.

The EPA’s supposed goals were all achieved without it, mostly before it was established. It didn’t go off the rails, it was never on them in the first place. Remember, the first thing it did was go after DDT and dioxin.

I enjoyed my earth day with a beautiful hike.

Happy Earth Day from approximately 50 miles from Davis, CA where the temperature was well over 80 degrees… well above the above the average for the region…. I wonder if professor Watt noticed.

I celebrated by firing up the John Deere so momma could mow a large portion of the “north 40”. She burned about 4 gallons of unleaded regular; most of the bodywork on the machine is plastic of some sort. I mixed some of that regular 50:1 (actually I cheated and went 40:1 as the leaner mix is bad for the 2-stroke motor) and took the chainsaw to some low limbs to break the fuel ladder, a concern with fire season approaching. All the gas cans involved are plastic. Speaking of fires, I then burned some diesel to truck the cut wood to the burn pile and touched it off. Closed it out with bottle of Deschuttes Black Butte Porter.

All in all, a pretty decent day.