Leaders not happy with Omar’s anti-Semitism. 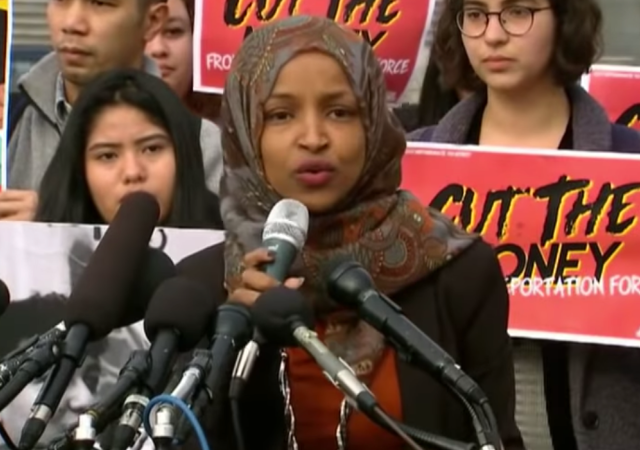 A few Democrat freshman representatives have caused problems for the party, which has led to whispers among Democrat leaders within those respective states to find primary challengers.

First it was New York Rep. Alexandria Ocasio-Cortez. Now Minnesota Democrat leaders have begun to look for a primary challenger against Re. Ilhan Omar.

Omar has caused headache after headache for the Democrats since she came into office in January, mainly with her anti-Semitic remarks at townhalls and on Twitter.

These actions have upset Democrats in Congress, but also those back home in Minnesota. The Hill reported:

Several party leaders said they have had discussions about finding a candidate to take on Omar, just two months into her first term in Congress.

But even those who were deeply offended by Omar’s comments about Israel concede they have not yet found anyone to challenge her.

The Jewish community within her district has tried to educate Omar on anti-Semitism and tropes since she served in the state legislation. She never seems to learn, causing frustration among Jewish leaders:

“Our community is exasperated by Rep. Omar’s unfulfilled promises to listen and learn from Jewish constituents while seemingly simultaneously finding another opportunity to make an anti-Semitic remark and insult our community,” Steve Hunegs, executive director of the Jewish Community Relations Council of Minnesota and the Dakotas, said in a statement.

Omar met with Hunegs last month, after her initial remarks received widespread condemnation. She has continued to meet with Jewish leaders both in Minneapolis and Washington, a spokesman said.

“Unfortunately, having the opportunity to speak with her about that point didn’t dissuade her making that statement,” Hunegs told The Hill in an interview Wednesday. “We were appalled.”

The editorial board at the Mankato Free Press, in Mankato, MN, lashed out at Omar’s behavior. Mankato is not located in Omar’s district, but the city deserves to voice an opinion since the board points out that her behavior reflects badly on the state as much as it does on her.

The editorial board agreed that her “self-inflicted controversy makes it more likely that she will face a primary opponent.” They urged her “to focus her criticism on policies rather than personalities.”

Can a primary challenger win? Omar replaced Keith Ellison, who has a history with anti-Semite Louis Farrakhan and anti-Israel activists. Despite these ties, Ellison remained popular and Minnesota citizens even voted him for attorney general of the state in November.

Dr. Eric Ostermeier explored the possibility at Smart Politics. If a primary challenger defeats Omar, that person will make history in Minnesota:

With Democratic leadership largely standing by her side, it is unlikely the path to unseating Omar in a primary will be easy.

Should such an attempt be made and were it successful, it would be a first in the annals of Minnesota Democratic politics.

Of the 128 true freshmen Minnesota U.S. Representatives to seek a second term since statehood, only four have failed to win their party’s nomination – and just two during the last century. All were Republicans.

Some in Minnesota agree with Ostermeier’s assessment. From The Hill:

“While she has created a significant amount of controversy for herself and said things that have offended many Americans, I’m not sure that one could make the case that she is in trouble yet,” said Mike Erlandson, a former Democratic-Farmer-Labor Party (DFL) chairman and chief of staff to ex-Rep. Martin Sabo (D) who ran for the seat against Omar’s predecessor, Keith Ellison (D), in 2006.

I doubt a primary challenger would beat Omar or even Ocasio-Cortez, but the fact is the Democrat Party has a rebellion in itself at the worst possible time. They want to defeat President Donald Trump in 2020, but it’s not an easy thing to do when the foundation has cracks.

I also don’t expect Omar and the others to change their behavior. Omar said as much in a Politico interview last week:

Anti-Semites have been flying under the radar for decades. They have been hiding in plain sight. San Diego State political science instructors have been pushing this narrative, as have others in academia across the country. From holocaust deniers, to defenders of the Palestinian’s and other muslims’, propaganda, to the BDS idiots, this vicious nonsense has slowly but surely been gaining momentum. The failure of the dem leadership to stop, or even condemn it speaks volumes.

Depends on the radar you’ve been using. Jesse Jackson comes immediately to mind. Been on my radar for years.

The failure of leftist butt-kissing bastards called the Jewish leadership to see it coming is even more disconcerting.

Its as obvious as the nose on our faces that she is an anti-semite. She knows darn well what she is saying is anti-Semitic and frankly she doesn’t care. Now that Nancy Pelosi has watered down the anti-hate resolution, she feels emboldened to continue her diatribes. The local media was complicit in hiding her scandalous history prior to the election. She was Ellison’s hand picked successor and its going to be hard to get rid of her.

Powerline Blog has been writing about this woman and her beliefs, lies and frauds for years. In MN her beliefs are well known and it appears her district is determined to have her in office anyway.

I would posit that the percentage of muslims who are NOT anti-Semitic is very small and probably contained to a very small group of natural born Americans. All one has to do is to look at the anti-Semitism around the world to see what two factors have risen together. One is the huge influx of muslims into Europe and the other is the rapid rise in anti-Semitism in Europe. Duh! Is this really so hard for the elite to see? Or how about the msm? Or the law enforcement agencies of the world? Why is this not headline news? When you see an outbreak of BDS or some anti-Israel protest on campus, you can bet there are muslim students involved. Why does this remain under the radar?

Does the Central Committee of MinnDems think they can offer a candidate that her voters will go for? The word is “entrenched” like a deep set tick. The “White Rich Privileged” Dem oligarchs are slowly being replaced by their serfs. Inclusion becomes exclusion.

when antisemitism tales over a country, that country is not going to stay FREE!

get your hijabs ready.

I’d like to thank the democrats for a full-on whackadoo freak show. This is way more entertainment than expected at this early point of the election cycle.

The leadership of the Democrat Party does not object to her being anti-Semitic in the slightest. They object to her public expressions of it that are blatant enough so that they cannot pretend to disagree with her by speaking out of both sides of their mouths. Her words reveal the Democrat Party for what it supports. They will not challenge her, at least not successfully. And anyone who supports a non-ISIS challenger will be made to pay the price in multiple ways.

We do not share a Social Contract with the Left anymore.

The old courtier-left created the New Red Guard and now their political Frankenstein is lurching through the village scaring all the normies.

I would argue that this issue is cut from the same cloth as the Dems’ perception of Bolshevik Barbie. AOC has opened her big fat mouth and let anyone who cares to pay attention understand just how authoritarian and Maoist the party has become. We should be glad for the candor. The question is whether or not the GOP has the wisdom and cojones to utilize these gifts in the coming elections.