It’s not clear how they feel about “Millionaires for President” 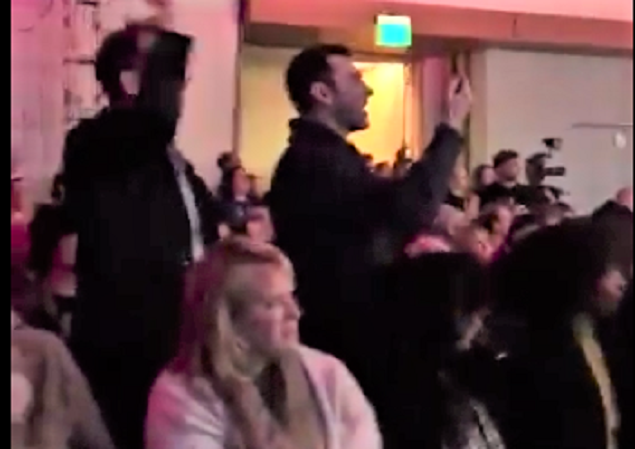 As I noted in January, former Starbucks CEO Howard Schultz is considering an independent run for the White House in 2020, and “the left is having a collective meltdown at the very idea.”

That meltdown now appears to be taking the form of heckling.

Schultz was attending this year’s Unrig Summit in Nashville, Tennessee.  Unrig, according to the Tennessean, is “a conference targeting millennials and focused on uniting the right and left to fight corruption in politics.”

Schultz was on the stage while someone else was speaking at the podium, and a handful of people started heckling with cries of “Billionaires for President!”.  His billionaire status really rubs many on the left the wrong way, so much so that Vox even published an article entitled, “Dear billionaires: stop running for president.”

My guess is that they are fine with a “Millionaire for President” . . . if that millionaire is socialist Senator Bernie Sanders (I-VT).

Maybe the Democratic party will change his politics from theirs to ours? They converted Trump, why not Schultz?

Can’t those Dems just get along? As an opposite to Schultz, maybe they can run a welfare mother from the mid west who has five kids by five different -males. If she has subsidized housing, “food stamps” and heat subsidy…hell, the two of them might make a balanced ticket and wind up in the ultimate subsidized housing: 1600 Pennsylvania Ave.

We have a welfare queen here with 20 kids, she and here stude of the day are in one apartment, the older kids take care of the younger kids in another apartment.

There isn’t a ghost of a chance that he’ll ever be POTUS.

Mr. Tom, you are quite correct, but the socialists know he won’t beat them or President Trump. Their GREATEST fear is that he will garner 4% or more to guarantee an electoral and, therefore, a socialist loss in 2020.

He won’t get even one vote from President Trump’s supporters. He will, however, get many votes from disillusioned liberal Jews and centrists from the dems. IMHO.

Don’t care how much money he has, that willowy thin reed he calls a backbone should disqualify him. He shut down starbucks for a seminar on equality because a couple activists got news coverage over not being able to pee in a store where they didn’t buy anything. What a loser chump schmuck.
If China and Russia peed on his shoes, he’d drop and start licking it up to appease them.

If he somehow made it to debates (so seriously doubtful), all Trump has to do is hold up one of those Starbucks “chat about race with your barista” cups, and he’s done. Right there. No one appreciated that SJW virtue signalling crap, not the right, not even the left. We want coffee from a coffee shop (and it’s telling that the socialist left even wants coffee from a coffee shop), not uneducated coffee jocks talking about race in America (before we’ve even HAD our coffee). What a bone-headed decision. Add to that the “hey! How great would it be to open our bathrooms to drug users who don’t buy a thing? . . . and, oooooh!!! Let’s install needle disposal units for them!”. Yeah, this guy is never going to be president.

notamemberofanyorganizedpolicital in reply to Fuzzy Slippers. | April 1, 2019 at 12:33 pm

That’s Great Fuzzy. Keep reminding us of that.

These people sound so profoundly stupid. And they are trying so hard to appear intelligent.

I don’t mind billionaires throwing their own money on their own funeral pyres but the biggest benefactors are the advertisers and media companies and we now where they direct these profits.

So long as the stampede of communists accomplishes nothing but assuring the re-election of Trump, burning even more of the Masters of the Universe money is a good thing. But let’s not forget that Schultz is subsidizing his opponents. He is not getting the love from anyone anywhere. I’ll bet even his own employees (who should be wearing hazmat suits these days) will be voting for him.

We just had a long-standing brick and mortar Fourbux location close in Portland. It is one that I drive by but don’t often frequent. I asked a person who lives in the neighborhood what she knew about it, and she responded with a similar WTF when she went to get a cup recently? Fourbux is like the universe, simply expanding everywhere in all directions, so to see a step-back in the pacNW of all places is somewhat shocking. I have been tempted to place a “get woke, go broke” sign on the window, mostly to see if The Mercury would dedicate an entire issue to it. /s Still, part of me wonders if this is a location where customers have decided to go elsewhere for their coffee following the policy change from a year ago.