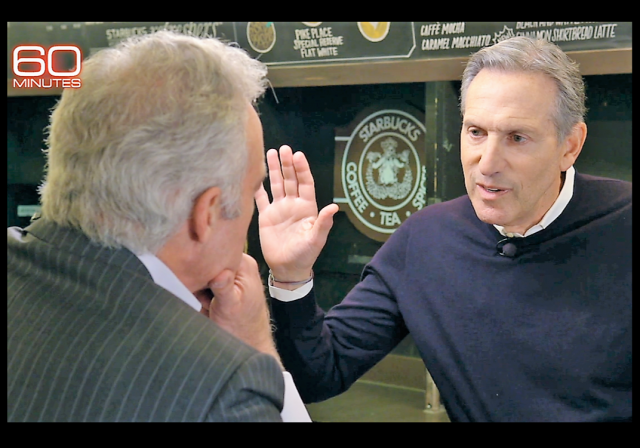 Former Starbucks CEO Howard Schultz is considering an independent run for the White House in 2020, and the left is having a collective meltdown at the very idea.

Schultz, who was behind the embarrassing “talk about race with your barista” fiasco and the decision to let drug addicts shoot-up in Starbucks bathrooms without forking out $5 for a coffee, is a dedicated social justice warrior who thinks his business acumen and experience in the global marketplace will stretch his appeal across both sides of the aisle.

Schultz explained his reasoning in an interview with the New York Times.

Mr. Schultz, in an interview with The New York Times, said he planned to crisscross the country for the next three months as part of a book tour before deciding whether to formally enter the race. Despite his considerable wealth, Mr. Schultz would face a difficult road: Few independent candidates have mounted successful challenges for the White House.

“We have a broken political system with both parties basically in business to preserve their own ideology without a recognition and responsibility to represent the interests of the American people,” Mr. Schultz said in the interview.

“Republicans and Democrats alike — who no longer see themselves as part of the far extreme of the far right and the far left — are looking for a home,” he added. “The word ‘independent,’ for me, is simply a designation on the ballot.”

The left apparently agrees and is busily freaking out that whatever socialist the Democrats run will lose non-socialist but “woke” Democrat votes to an Independent Schultz.

The Atlantic sums up the left’s fear in its headline: “Ex–Starbucks CEO Could Get Trump Re-elected.”

Top Democrats say they fear that an independent presidential run in 2020 by billionaire former Starbucks CEO Howard Schultz would serve mainly to siphon off enough voters from the Democratic nominee to help hand President Donald Trump a second term.

“I do share that concern, if he did run… it would provide Trump with his best hope for getting re-elected,” former Housing and Urban Development Secretary Julián Castro, who recently announced his campaign for the Democratic presidential nomination, said Sunday on CNN’s “State of the Union.”

. . . . Schultz, 65 and a life-long Democrat, would offer himself as an antidote to the bitter political division in Washington, according to The Atlantic magazine. He’s already begun hiring consultants, including Steve Schmidt, the manager for former Arizona Sen. John McCain’s Republican presidential campaign in 2008. Next week, Schultz is slated to launch a book tour.

. . . . Other top Democrats similarly decried the prospect of a Schultz candidacy, saying it would be nothing but good news for Trump.

The following tweets are via HuffPo:

The only good news @realDonaldTrump received in an otherwise dismal week: The prospect of a well-funded independent candidate to dilute the opposition in 2020. https://t.co/OpvEcZEro8

If Howard Schultz goes through with this half-baked idea, he will pose an existential threat to a Democrat in what will likely be 2020 race decided by a few votes in a handful of states https://t.co/AblXaqoewJ

The best thing that Howard Schultz can do for the country is invest in education, voting rights, civil rights, and climate advocacy. There is zero appetite for this, and there is an urgent need for the Democratic candidate to win in 2020.

Others are urging him not to run because it will “divide and conquer” the left.

Schulz appeared on 60 Minutes Sunday evening and explained his ideas about amnesty, self-financing his potential campaign, climate change, and health care. Spoiler, he’s for amnesty, happy to spend hundreds of millions on his campaign, thinks leaving the Paris Climate Accord was a bad idea, and thinks that the Democrats’ “free health care for all” is “as false as the wall” in that “the country cannot afford it.”

You can read the transcript here.

Schultz will be running against a fleet of clown cars and Trump. Why not? He won’t win but his message will further expose the radical message voicing nothing but anger infecting the Dem party.

All of these old, self-loathing white Democrats will get crushed leaving the Dems as the lesser of the two 3rd parties.

And there will stand Trump, towering above the smoldering wreckage, more popular than ever as he campaigns on his long list of accomplishments with more to come.

Like making Mexico pay for that wall he hasn’t gotten built yet?

LMAO…you’ve convinced yourself that the president of Mexico was going to cut a check and slide it across the table to Trump…didn’t you?

A heroin needle in every bathroom and ice cream cone.

Democrats are TERRIFIED that somebody will run as a leftist without being anointed by the party leaders.

The same as the GOPE was TERRIFIED that someone would run as a Conservative without being anointed by the Party Leaders. How’d that work out for the ‘Party Leaders’ who are still trying to undo the voters?

Back in the day when Algore was still somewhat relevant I wrote a little poem about that clown Begala and sent it to my Conservative friends.

Don’t remember it all but it started out with: “Paul Begala. Forehead big as an Impala”.

I’ll be here all week!

If their worried that they will lose to this Starbucks billionaire then the extreme progressive fascists should support this guy who has some sanity.

I’ll get his campaign started by offering a free suggestion for a campaign slogan: Schultz 2020 – “I know noottthing!”

notamemberofanyorganizedpolicital in reply to RedEchos. | January 27, 2019 at 11:51 pm

RedEchos in reply to notamemberofanyorganizedpolicital. | January 28, 2019 at 2:17 am

He was a businessman, and apparently a prophet

snopercod in reply to notamemberofanyorganizedpolicital. | January 28, 2019 at 2:18 pm

I was going to vote for Perot until he said his first act as President would be to double the budget of the IRS.

The left views Power with the same mentality as Wealth. There’s a finite amount of it, and only the faction they identify with should have it. Factional warfare is the result. We should do all we can to encourage this.

Despite his considerable wealth, Mr. Schultz would face a difficult road: Few independent candidates have mounted successful challenges for the White House.

Ah yes, the NYT and its Alt-History universe. “Few”? How about “none”?

All of our Presidents after Washington have been Federalists, Democrats (of either the Jeffersonian or Jacksonian variety), Whigs, or Republicans. Not an Independent in sight.

Unsuccessful challenges, now, those are another matter.

They have been successful in changing the outcome.

It is amazing that people squander a few hundred dollars a month on Starbucks. What a waste.

notamemberofanyorganizedpolicital in reply to JusticeDelivered. | January 27, 2019 at 11:53 pm

Their coffee is weak horrible stuff.
That’s why they have to absolutely load it up with sugar, creamers and flavorings to hid that fact.

forksdad in reply to notamemberofanyorganizedpolicital. | January 28, 2019 at 10:10 am

Their coffee is burnt and bitter because they over-roast it.

Thanks for reminding me that I need some more BRCC.

That is because it is more socially acceptable to have a big frappachino cup in one’s hand than a mickee-D’s shake, even though they have the equivalent amount of calories, suet, and carcinogens.

I think Schultz needs to preapare himself for the unpersoning the media is about to give him if he looks like he might interfere with their Precious.

Howard, I hear Venezuela is looking for your type of “Leadership”.

What is it with these narcissists. One charismatic billion wins the Presidency and every rich liberal thinks they have a chance. It’s not even close!

Why do far left nutjobs see themselves as ‘centrists?”

He should definitely run. The number of self-proclaimed independents outnumbers the number of Democrats or Republicans. He can pick up a large number of Democrats who cannot stomach the Venezuelan-inspired Ocasio-Cortex Progressive extreme and all the NeverTrumpers. If he does it seriously he has a chance. Trump had the stones to fund his own campaign, run when all the nay-sayers said he had no chance and is President. I doubt a liberal like Schultz has the stones to do what Trump did but he has the money and the desire and would be a fool not to see how he is received.

He should definitely run. The number of self-proclaimed independents outnumbers the number of Democrats or Republicans. He can pick up a large number of Democrats who cannot stomach the Venezuelan-inspired Ocasio-Cortex Progressive extreme and all the NeverTrumpers. If he does it seriously he has a chance. Trump had the stones to fund his own campaign, run when all the nay-sayers said he had no chance and is President. I doubt a liberal like Schultz has the stones to do what Trump did but he has the money and the desire and would be a fool not to see how he is received.

It appears the the consensus here is that he’s going to hurt the Dems. I think that would be a pointless exercise, given that they won’t even have a front-runner for months if not a year or more, so he has really nothing much to leverage against. It seems just as likely that he’s going to try to do a Perot and peel away “moderate” Republicans from Trump. We’ll see which way his attacks and campaign promises go.

This is my secret fear, too, txvet. A CEO who thinks it’s a great idea to serve up racial grievances with one’s morning coffee might well decide, once president, that all Executive agencies should engage in “Race Together” chat over their tax returns (and etc.). A CEO who thinks it’s a good idea to open Starbucks bathrooms to all and then to place “syringe disposal bins” in bathrooms might well decide that drug-addicts should be allowed to shoot-up every- and anywhere and their detritus is the taxpayers’ responsibility.

There are plenty of RINOs who think these are great plans (let’s look no further than the current push to “fix” the “problem” of too few GOP women holding elected office; forget the voters, they don’t matter when it comes to ensuring that there is an acceptable number of vaginas elected to Congress).

But yeah, considering how many prominent purported Republicans voted for Hillary, there may be some concern here for Trump supporters. He’ll still, though, be more of a drain on the (D) vote. If (when?) Kasich announces his third party Indie run, the right will be happy to have Schultz siphoning leftwing votes, thinking it may result in a wash.

We live in interesting times.

The former Starbucks CEO Howard Schultz purchased the NBA Seattle SuperSonics in 2001 and sold it in 2006 to Clay Bennett, who then moved the franchise to Oklahoma City.
“It’s a public wound I cannot heal.”

I’ll make a toast and drink (coffee) to that!
Splinter the hell out of the Undemocrats.

Maybe he wants to be president to pardon himself for the crime of inflicting upon the public that sewage he calls coffee?

I’ve never figured out how a significant number of Bernie Sanders supporters apparently voted for Trump when their candidate failed to win the nomination. How does one draw a Venn diagram that shows commonality between Trump and Sanders? Nonetheless, there apparently are such people.

BUT, how many? Probably not enough to support Shultz’ assertion that he’d draw as many votes from potential Trump voters as he would from whatever nutty socialist Democrats manage to nominate.

So, yes, Democratic strategists are right to fear his candidacy.