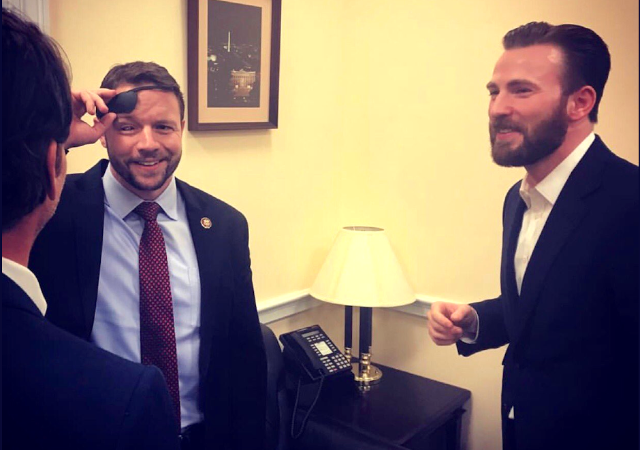 Captain America actor Chris Evans visited Capitol Hill last week to talk to lawmakers about a variety of issues, but one meeting in particular threw the star for a loop.

During the course of their meeting Crenshaw, a former Navy SEAL who lost his right eye after an IED explosion in Afghanistan, revealed his glass eye to Evans.

It was an image of Captain America’s shield:

From the photo alone, Evans was clearly surprised and impressed. Later, he said as much in a tweet:

A VERY cool use of vibranium https://t.co/zv5L9hqqTl

The Captain America glass eye is not the only one Crenshaw owns. In a Twitter video from December, he mentioned he had about 10 glass eyes. He said the one he wears the most features the Navy SEAL trident:

Over the last year, I've gotten a lot of questions about where I got my eye patch, why I wear it, and the glass eye underneath. So here is the scoop. I get my eye patches at https://t.co/H6fZqbcFRk pic.twitter.com/pctcy1Iq6S

Crenshaw has also been known to wear different eye patch designs from time to time.

No pun intended, but Evans and Crenshaw probably don’t see eye to eye on much. The actor is a vocal critic of President Trump’s. Crenshaw was a sometimes-critic of Trump during his primary, but since elected has agreed with him on a number of issues like the need for stronger border security, strengthening the laws on illegal immigration, and supporting the Venezuelan people.

Evans met with other Republicans as well, including Senator Tim Scott (SC):

Honor to meet you, sir. Thank you for taking the time. And if you repeat the secrets I told you about Endgame, Marvel will make sure we BOTH turn to dust. https://t.co/VfAsKpwOaK

Evans won’t say what particular issues he discussed during his two visits to DC in recent weeks. But as his tweets and those from several House and Senate members he talked to made clear, Avengers: Endgame – which premieres April 26th – was a popular topic of discussion.

Evans and Crenshaw do have a little more than a fondness for Captain America in common. As it turns out, the Congressman also has some acting experience under his belt. Crenshaw’s profile rose to national prominence when he, as a candidate, was mocked for his eye patch during a Saturday Night Live skit featuring comedian Pete Davidson shortly before the November 2018 election:

Davidson took shots at Florida Gov. Rick Scott, a Republican running for the Senate, and Rep. Peter King, R-N.Y., before he took aim at Crenshaw, a Republican. The show pulled up an image of Crenshaw wearing an eye patch, with Davidson commenting, “This guy is kind of cool, Dan Crenshaw.”

“I’m sorry. I know he lost his eye in war or whatever,” he added.

Backlash ensued. A week later and shortly after Crenshaw was elected, Davidson apologized to him on air and both appeared together on the show, with the just-elected Congressman playing the role of himself and getting in a few digs at Davidson’s expense.

Rep. Crenshaw already has a Democratic challenger for his seat. Elisa Cardnell, also a Navy veteran, announced her candidacy in January.

— Stacey Matthews has also written under the pseudonym “Sister Toldjah” and can be reached via Twitter.

Uh oh…this is not woke enough (too white and male) for the left crowd. Good thing for him that he’s leaving the MCU.

I don’t agree with a lot of Chris Evans beliefs, but in general he’s a pretty class act that’s willing to discuss issues.

Him being replaced by Brie “white men should shut up” Larson is the death knell for the MCU.

That glass eye is awesome!

now if it glowed….

But the Capt. America eye creeps me out.

Everything I’ve seen or read about Crenshaw shows him to be a real Class Act. And a great conservative asset.

I hope he continues to rise in our government.