“no indication the man is affiliated with any left-wing groups” 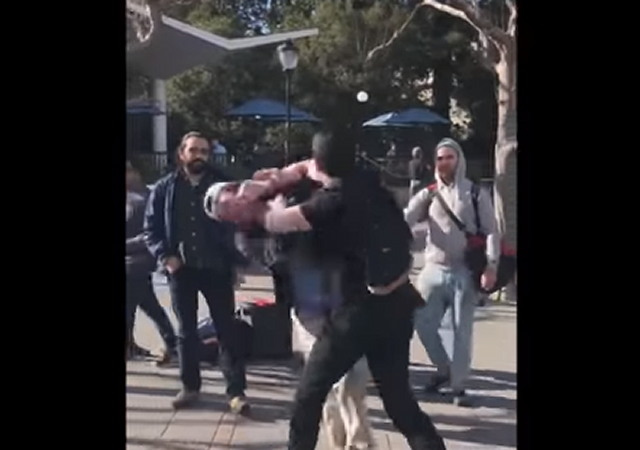 The suspect has not yet been named or arrested. Read the full back story here.

UC Berkeley police have identified a man suspected of punching a right-wing activist on Sproul Plaza on Tuesday but he has not been arrested yet, nor have police released his name.

Videos of the incident went viral this week, after they were shared by conservative groups and figures calling the assault a leftist attack on students’ free speech. UC Berkeley has said, however, that neither the activist or the man suspected of punching him are students, and there is no indication the man is affiliated with any left-wing groups.

The most-viewed video begins in the middle of an altercation between two young men, one of whom was recruiting on Sproul Plaza for Turning Point USA, a national nonprofit that organizes right-wing college students.

In the video, the Turning Point recruiter is holding his phone out, appearing to film the other man. The man walks into the recruiter and swings his sweatshirt at him.

“Put your hands on me again, motherfucker,” he says to the recruiter. “Racist little…bitch.” He then punches the recruiter in the face and walks off, continuing to curse at him.

UCPD Sgt. Bryan Sato said Friday that the department received a report of battery around 3:30 p.m. Tuesday, and is continuing to investigate the incident. UC Berkeley spokesman Dan Mogulof and UCPD sent a statement Friday afternoon announcing a suspect had been identified. His name was not released.

Does being a Democrat qualify as being associated with a left wing group?

What the bloomin’ he[[ does an affiliation or not with a left-wing group have to do with the guy’s potential criminal liability for assault?

Not to be too cynical, but my guess is this is the PD brass seeking to determine, before arrest, whether there’ll be any antifa or other wackos mounting a protest when he’s charged.

On another site, a commenter had posted mug shots of Antifa, and there’s an uncanny likeness of one of them to this guy.
Who would be surprised?!

It turns out that he is not a student and is antifa. The campus police have identified him.