“student appearing to try to defend himself as the man comes at him, batting at his face and phone” 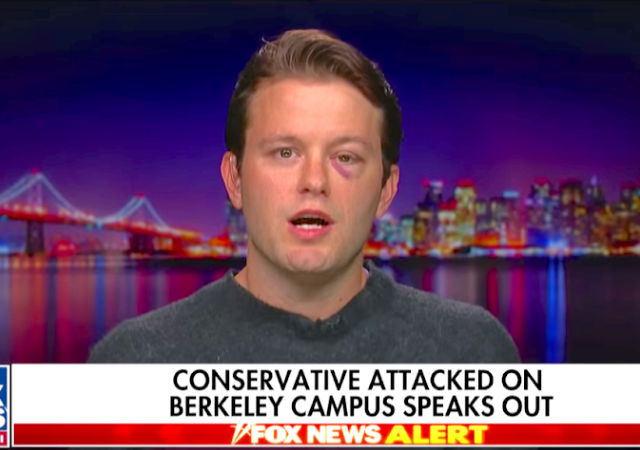 Hayden Williams, a student at UC Berkeley, was helping the conservative group Turning Point USA when he was attacked and punched in the face in broad daylight. It was all captured on camera.

Will the media give this story one percent of the attention they devoted to Jussie Smollett?

Graham Piro of The College Fix has details:

VIDEO: Conservative student punched in face over ‘This is MAGA Country’ poster at UC Berkeley

A student activist for the conservative campus group Turning Point USA was verbally and physically assaulted on UC Berkeley’s campus by an individual who apparently became enraged by his “Hate crime hoaxes hurt real victims” and “This is MAGA Country” posters.

Roughly 60 seconds of video obtained Thursday by The College Fix shows one angry man saying “you are fucking encouraging violence.” Another man comes up and calls him a “racist motherfucker” and tells the student he would “shoot his ass.” They tussled for a bit, with the student appearing to try to defend himself as the man comes at him, batting at his face and phone.

He then punched the student in the face with a haymaker and calls him “fucking cunt” as he walks away.

The university sent an email to the campus community notifying them of the attack and asking for information to help in identifying the perpetrator. There is no clear evidence at this time that the attacker is a UC Berkeley student, although he was wearing a backpack and appears college-aged.

Fox News reported that university employee Yuvi Panda celebrated the assault. He thanked the apparent attacker, who has yet to be identified, for punching conservative activist Hayden Williams and “not letting it go unchallenged.” He also said that he hopes the attacker won’t get into too much trouble. His Twitter account is now protected.

Williams spoke about the incident on Hannity:

Williams says he “absolutely” has evidence and eyewitnesses that he did not provoke the alleged attacker. Williams began to record the confrontation but says the alleged attacker knocked his phone from his hand. However, a bystander recorded video of the incident.

The man in the video can be heard shouting profanities at Williams and at one point threatens to shoot him.

“I feared for my own safety so I started to record at that moment,” Williams told Hannity.

“That shot was a cheap shot, especially in the end,” Hannity told Williams.

Charlie Kirk, the president and founder of TPUSA posted the following message on Twitter:

Imagine if the attacker was wearing MAGA hat, would be national news!

This is the violent left!

The injured student in the above photo is Hayden Williams.

He is a conservative student who was targeted and beaten by a vicious leftist on the UC Berkeley campus.

He was hospitalized by the attack and sustained massive injuries.

.@UCBerkeley and Chancellor Christ just sent out a message via email to the Berkeley community condemning the attack on the conservative activist. Thanks to everyone who helped make this happen! Let’s find this guy! pic.twitter.com/okHbLrX2C7

My friend, Hayden, wants to thank all of you for the love and support. He’s giving you a wink, and wanted to let you know you’ll be hearing from him soon! pic.twitter.com/6kPmFZgQgz

I am calling on the campus administration, as well as all faculty members and administrators committed to ensuring students’ physical safety to further condemn these violent acts in letters and announcements to the entire Berkeley community.

Why, you may ask, is this the right thing to do in this situation? Because now we have this perfect image of the perpetrator’s face! If you know who this man is, PLEASE DM ME! pic.twitter.com/r90A8ozcfS

Here is the altercation from my friends perspective. Conservative activists, take note. This is exactly the right thing to do, and I am so proud of him for recognizing the situation and not retaliating with violence. pic.twitter.com/QEuJWEQtz8

According to Gwendolyn Wu of the San Francisco Chronicle, the police are already involved:

In a stark video showing what appeared to be an assault, a man was shoved and punched in the face at UC Berkeley this week while advertising for a conservative cause at a table on the main campus plaza, police said Wednedsay.

The battery was reported at 3:29 p.m. on Tuesday to campus police, who found the victim suffering from facial injuries.

Two men had approached the victim, identified Thursday as Hayden Williams, who had been advertising at a table in the plaza for conservative group Turning Point USA, and began arguing with him, according to police. The victim started filming the encounter.

This will be ignored by many of the same people who fell all over themselves to show support for Jussie Smollett and unfortunately, no lessons will be learned.

A perfect demonstration of why I said from the start the Smollett attack was bullshit – when he posted the picture of him ‘recovering’ from his ‘assault’ and the picture had a little scratch on his cheek.

Take notes Jussie. This is what a guy looks like who has ACTUALLY been punched in the face.

Well now, in fairness to Jussie, he couldn’t let his pretty little face be marred if he was going to go on tv and pretend to be a lackey in the fake TV version of Death Row Records.

(Note: I’ve never watched it but I spent about 10 seconds googling the plot and realized pretty quickly how predictable it was)

Right! You can bet the Berkley police are working overtime on this one!

it happened on campus, so it’s the UC cops investigating, but uit doesn’t matter: no Bay Area jury will convict this hero of the people…

Notice how the one guy is mad because the information table is “encouraging violence”. Hence, the twisted leftist logic goes then: well I must become violent because I’m offended now. This is how they respond to speech they don’t like. Get ready, it’s going to get much worse.

I gleefully await the day some Marxist bitch like the black-clad punk in this video tries that shit with me. He will wind up permanently maimed.

I don’t know you but if you are as tough in real life as you are claiming to be here (no offense intended), then it will never happen.

Leftists are known to go after soft targets that they can bully around. They scurry from anyone that can fight back.

The Left always, eventually, resorts to violence, threats of violence, or glorification of violence to advance its agenda. Always.

Will the media give this story one percent of the attention they devoted to Jussie Smollett?
—
this is one of them there “rhetorical” type question thingies, right?

I am looking forward to the perp. being identified and then facing both criminal and civil sanctions.

Will not happen. This is California, this is Berkeley. Both the police and the University will work to see that the assailant is NOT found. There will be no due process. There will be no rule of law. It is a freebie attack on someone they want to silence.

Saw on another post that the police believe they have identified the suspect.
We can hope. We also need to hope he is convicted.

Find this SOB and throw his butt in jail. This crime needs to be adjudicated.

I hope they find this guy quick, dude needs to face charges for what he did, needs to learn that just because you don’t like someone else’s view(s) that doesn’t give you the right to knock the snot out of them.

Let’s put the MAGA red hat on the thug and make the real victim a liberal pussy. Now imagine what we would be seeing on TV 24/7! Remember all the terrible things that happened under obama? Do any of you remember the msm blaming him for one single incident? There is no crisy like hypocrisy!

Suspect was identified today according to reports from Berkeley.

On 911 the advice to not counterattack plane hijackers, which was for many years the best practice advice developed from what had been numerous hijacks over the years since 1961 and jetliners. It was considered the best thing. Just as the young man holding the camera phone in front of his face did. No counter-attack. Not even a defensive blocking move.

Yet it really wasn’t the best advice, but it took almost three thousand killed on one morning to know that. But it became known to one of the hijacked planes, “Let’s ROLL !”

Too late, too many years under Ghandi’s flag.

am with paul– let the punk swing–block, then a simple combination(nothing elaborate or spectacular)and the little shyt can wake-up in the hospital with his jaw wired shut

texansamurai…
It’s hard to fight back when you don’t put down your stupid phone !!!!!!
I don’t understand this fascination with self-recording every moment…? In todays world there will be at least 100 phone zombies recording the altercation for posterity…

This is why, as a conservative in the Bay Area, you always go undercover. It really isn’t safe!

The conservative students in the video are very courageous in my mind. Being public with their views on the Berkeley campus, of all places? Like going into the lion’s den!

Conservatives of any stripe in California are trapped in a hostile foreign country at open war with America. There is no safety there.

I don’t know. Seems to me this guy was just throwing out bait. Just as a loonie on the left is prone to letting loose a punch so is one on the right.

If you are going to a liberal campus to make a statement, why not come with a meassage commensurate with conservatism instead of a tinder box on a stick?

I duuno that sugar coating the message will get others to respond to his cause. OTOH … you risk attracting the wrong sort like in this case.

I don’t know. Seems to me the the guy with the sign was just throwing out bait. Just as a loonie on the left is prone to letting loose a punch so is one on the right.

If you are going to a liberal campus to make a statement, why not come with a meassage commensurate with conservatism instead of a tinder box on a stick?

Aaaand now I am aware everyone can see my edits.

Sorry, still getting used to the platform.

Noble….
Unfortunately, there’s no way to edit a comment after posting.
Use the Preview button to proof read your posts….
(takes a little getting use to ! 🙂 )