She completely glossed over Farrakhan’s racism. 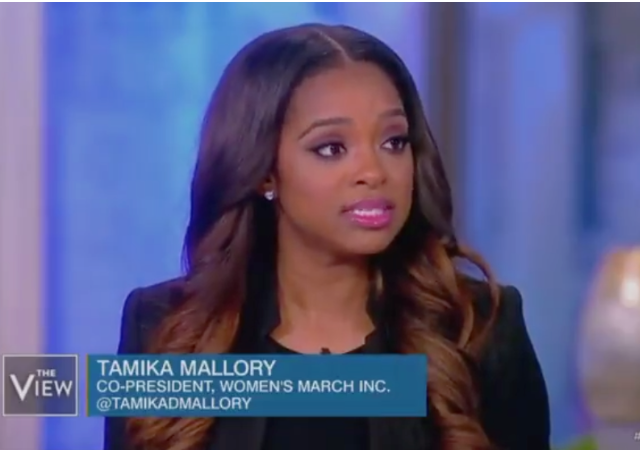 As the Women’s March bleeds supporters over the support of anti-Semite Louis Farrakhan, leaders Bob Bland and Tamika Mallory appeared on The View. Instead of condemning Farrakhan’s hatred of Jews, Mallory doubled down:

“I think it’s important to put my attendance, my presence at Savior’s Day — which is the highest holy day for the Nation of Islam — in proper context,” Mallory replied. “As a leader, as a black leader in a country that is still dealing with some very serious unresolved issues as it relates to the black experience in this country, I go into a lot of difficult spaces.”

“I wrote a piece immediately following the beginning of this controversy talking about wherever my people are, that’s where I must also be,” she said, adding that she has also visited prisons. “Just because you go into a space with someone does not mean that you agree with everything that they say.”

That was not good enough for Meghan McCain as she recalled some of Farrakhan’s famous anti-Semitic rhetoric: “I’m not anti-Semite, I’m anti-termite” and “It’s the wicked Jews, the false Jews, that are promoting lesbianism.” McCain also mentioned the Tablet investigation that finally put in the face of everyone the anti-Semitic feelings of the Women’s March leaders, especially Mallory.

Bland shot down the allegations and insisted “that the Women’s March unequivocally condemns anti-Semitism, bigotry.”

McCain had the courage to flat out ask Bland and Mallory if they “condemn Farrakhan’s remarks about Jewish people.”

Bland said: “Yes, and we have repeatedly, in statement after statement this year, which are available directly on our website for anyone to read.”

As for Mallory? Take a wild guess:

“What I will say to you is that I don’t agree with many of Minister Farrakhan’s statements,” Mallory said.

“Do you condemn them?” McCain asked.

“I don’t agree with these statements,” Mallory repeated.

“You won’t condemn it,” McCain noted.

“To be clear, it is not my language, it is not the way that I speak,” Mallory insisted.

Never forget this passage from the Tablet investigation (emphasis mine):

At the end of January, according to multiple sources, there was an official debriefing at Mallory’s apartment. In attendance were Mallory, Evvie Harmon, Breanne Butler, Vanessa Wruble, Cassady Fendlay, Carmen Perez and Linda Sarsour. They should have been basking in the afterglow of their massive success, but—according to Harmon—the air was thick with conflict. “We sat in that room for hours,” Harmon told Tablet recently. “Tamika told us that the problem was that there were five white women in the room and only three women of color, and that she didn’t trust white women. Especially white women from the South. At that point, I kind of tuned out because I was so used to hearing this type of talk from Tamika. But then I noticed the energy in the room changed. I suddenly realized that Tamika and Carmen were facing Vanessa, who was sitting on a couch, and berating her—but it wasn’t about her being white. It was about her being Jewish. ‘Your people this, your people that.’ I was raised in the South and the language that was used is language that I’m very used to hearing in rural South Carolina. Just instead of against black people, against Jewish people. They even said to her ‘your people hold all the wealth.’ You could hear a pin drop. It was awful.”

Reached by Tablet, Wruble declined to comment on the incident. Multiple other sources confirm that soon after, Wruble was no longer affiliated with the Women’s March Inc.—as the nascent group was starting to be known.

Now I give you the mic drop, courtesy of Emily Zanotti Skyles:

The fact that Tamika Mallory can’t say “I condemn his anti-Semitism” is all you need to know about why the Women’s March is bleeding support. https://t.co/2g5TPbtExp

…”I go into a lot of difficult spaces.”…

Like where women are second class citizens, receive honor killings if husband/father is ‘offended’ or woman wants to chose a different ‘religion’, have to wear sheets to hide their bodies, are at fault when they are raped or receive required clitorectomies…

I think I just saw the face of Farrakhan’s latest addition to his harem.

This seems like an organization that wants almost if not exclusively leverage the modern day victim-hood narrative. As such, it seems important to keep alliances with as many compatriots in that irresponsible effort as possible. And there may not be an organization and leader more entrenched and experienced in that effort than the Nation of Islam and Farrakhan.

I expect if she has to say anything more negative about him, he will come out and announce the Jews made her do it.

They’re not being shy about the required purity test to step onto their playground. White female liberals will never be black enough.

Major media outlets have known since day one that the leaders of the womens march were ethnic chauvinists and religious bigots, but embargoed the release of their knowledge to the public because it served a wider purpose; to normalize and mainstream radical Maoist-Leninist ideology.

That purpose having been accomplished, they are now purging the extremists (by outing the red guard as haters) prior to the 2020 election cycle.

This is so contemptible and nauseating, but, what else is new? The Dumb-o-crats and the Leftist media have been collectively enabling, whitewashing, excusing and rationalizing anti-Semitism in the black and black Muslim communities for a long, long time. These reprobates can always justify Jew-haters with the idiotic excuse, “Well, he did some nice things for the black community.” That’s how stupefyingly debased and self-serving the moral calculus of these idiots is.

And The View audience applauded… .

American Jews: why are you commiting suicide??????

I understand the thrust of your comment, but, please don’t generalize under the assumption that American Jews allegedly constitute a monolithic bloc vis-a-vis their political loyalties and sentiments — they don’t. This would be as silly as someone writing, “American Christians: why are you committing suicide?”

There are plenty of conservative Jews around — I’m one of them.

HOW does such a beautiful woman get to be so stupid? Genetics or indoctrination… Well, she’ll rot in the same ditch as all her brethren rot in at the end. Sad….

Physical beauty never lasts for long, so what really matters is a person’s inner beauty, and this one innerness is ugly as sin.

Hitler wasn’t all bad. He made the trains run on time. He was a vegetarian, he loved physical fitness, and he painted in his spare time. Surely all those must outweigh the anti-Semitism and crimes against humanity, yes?