In response to a demand at a Brock University town hall that he retract his prior condemnation of BDS, Trudeau reiterated: “I will continue to condemn the BDS movement ….” 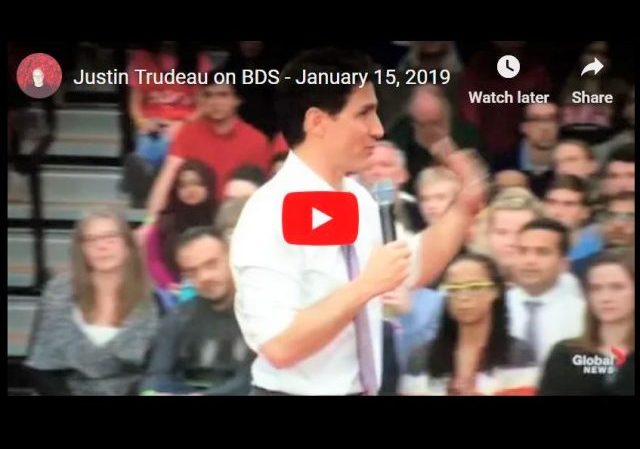 During the town hall, someone requested that Trudeau renounce Trudeau’s prior strong condemnation of the Boycott, Divestment and Sanction (BDS) movement.

Q. …. Will you take this opportunity today to retract your condemnation of the BDS movement?

Trudeau: …. Anti-Semitism as it existed back then [during the 1930s and 1940s] was commonplace and simply accepted and we fortunately moved on from there, but anti-Semitism still exists, and indeed, discrimination against Jewish people is still one of the largest source of hate crimes in Canada and around the world.

We need to understand as well, that anti-Semitism has also manifested itself not just as in targeting of individuals, but it is also targeting a new condemnation or an anti-Semitism against the very State of Israel. Which, as my friend Irwin Cotler has characterized, can be characterized by the three Ds: Demonization of Israel, a Double Standard around Israel, and a Delegitimization of the State of Israel.

And I think we have to be very careful as a society, and as a government, and as a country, to not sanction or support this new frame around anti-Semitism and undue criticism of Israel.

Now it doesn’t mean that you can’t criticize decisions by the State of Israel. That of course, is a democratic country that has an opposition party that every day has as its job criticisms of decisions that the government of Israel makes, and that’s perfectly natural and healthy and needed within a democracy.

But when you have movements like BDS that singles out Israel, that seeks to delegitimize and in some cases demonize. When you have students on campus dealing with things like Israel Apartheid Weeks that makes them fearful of actually attending campus events because of their religion in Canada, we have to recognize that there are things that aren’t acceptable, not because of foreign policy concerns, but because of Canadian values. It’s not right to discriminate or to make someone feel unsafe on campus because of their religion, and unfortunately, the BDS movement is often linked to those kinds of frames.

Yes, sir, I will continue to condemn the BDS movement ….

Trudeau’s formulation of the new anti-Semitism mirrors the definition used by the U.S. State Department and adopted by dozens of countries.

I discussed when anti-Israelism crosses into anti-Semitism, including the Three D’s test, in my lecture at U. Chicago Law School, VIDEO: When Does Anti-Israelism Turn Into Anti-Semitism?

I also showed in my lecture on The REAL history of the BDS movement, how BDS is a continuation of the anti-Jewish boycotts from the 1920s and 1930s, repackaged for the social justice crowd.

The REAL History of the BDS… by on Scribd

Needless to say, the very types of Israel haters Trudeau was talking about were not happy with Trudeau’s response to the question and the condemnation of BDS.

Justin Trumpdeau continues to stand against nonviolent solidarity and civic action to free Palestinians from the brutal Israeli occupation and apartheid that his government supports. He wants Palestinians to die from Israeli sniper bullets without making a fuss. 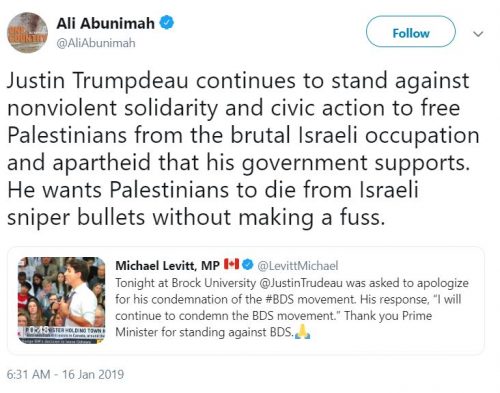 Jamil Dakwar, Director of the ACLU Human Rights program and an adjunct professor at Hunter College, proved why the ACLU is not what it once was, by tweeting:

Very disappointing that he is reciting hasbara [Israeli propaganda] talking points. What and how does he want Canadians to act in response to the decades long injustice against the Palestinians? Silence is complicity! 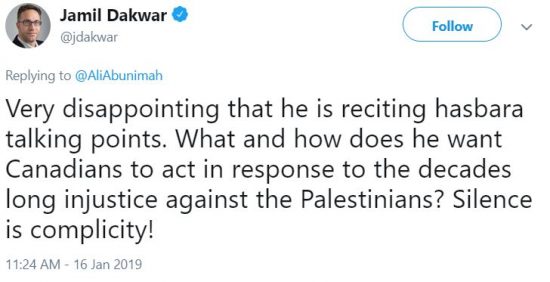 While BDS has made inroads on campuses and among the Democratic Socialist wing of the Democrat Party, it is losing its legitimacy as the recognition grows that BDS targets Jews because they are Jews asserting their right to self-determination in the homeland of the Jewish people.

“I will continue to condemn the BDS movement ….”

Until he doen’t. We can rely on this flake, like we can that ghoul nancy pelosi, who with schumer, has sidled up the most virulent Jew-haters ever to remain unshamed in American politics.

Pelosi looks like a ghoul, but the science is settled: she’s now become one.

On Trudeau: Stopped clock is right twice a day. Is he reliable? Probably not.

Palestinians are solely responsible for their condition. If, when Israel was created, or even at some later point in history, Palestinians could have ended their hostilities and rode Israel’s coattails to prosperity.

Instead, they have poisoned their culture, generation after generation, with endless lies and hate. In my view, what they do to their children, having too many, and then indoctrinating them to willing die young, is the most damning thing I have ever seen.

He got one right!

As a Canadian who’s been strongly opposed to Trudeau since he announced he was going to run for his party’s leadership, it’s nice to see that he’s finally gotten something right. And it’s something that’s not a big vote winner for him.

His next family get together might be interesting, his younger brother is a film maker who’s done work for Iran’s Press TV.

Funny how the Diaper Heads come out in force when they don’t get their way in condemning Israel ,,, just like the demoCRAPS having a Melt Down over OUR President wanting to build a Wall to protect Americans.

I doubt Mr. Trudeau and I would find much that we’d agree about on politics but I do believe in giving credit where credit is due.

Good for you, Mr. Trudeau. You nailed it.