SNL compares Elizabeth Warren to a Prostate Exam: “So bend over America, and let Mama Warren get to work”

SNL compares Elizabeth Warren to a Prostate Exam: “So bend over America, and let Mama Warren get to work”

Not exactly the narrative an already *unlikable* candidate wants. 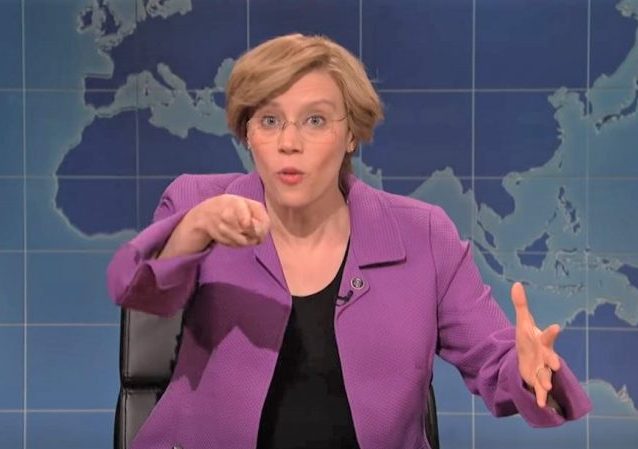 Saturday Night Live hasn’t been funny for decades, but it still can set a narrative on a political candidate.

Perhaps the most infamous example was the statement by Tina Fey playing Sarah Palin that “I can see Russia from my house.” Palin never actually said that, but the statement became urban legend, with Palin being mocked relentlessly for years for supposedly making the statement.

In the instance of Palin, SNL clearly was trying to damage her.

Fast forward to this weekend. I don’t watch SNL, but took an interest when I saw stories about Kate McKinnon playing Elizabeth Warren, in which the character compared herself to a prostate exam:

Portrayed flawlessly by Kate McKinnon, the whispering Senator admitted that she hasn’t been this “excited since my package from LL Bean had shipped.” Describing herself as a “spry and naughty 69”, Elizabeth had some hilarious gems, like when she described herself: “I’m like if Monday Night Raw was hosted by NPR’s Terry Gross.” In response to whether she’s likeable, Elizabeth compared herself to a prostate exam: “…[Y]ou’ll need on or you’ll die. This country, Colin, is look overdue for a finger up its caboose. You might even like it. So bend over, America, and let mama Warren get to work.” And when it came to her competition Kirsten Gillibrand, “Don’t you mean Kirsten Stolemybrand?” Elizabeth finished her pitch by saying, “America, you will do everything you possibly can to not vote for a woman for President. All I am asking is that you let me be that woman!” 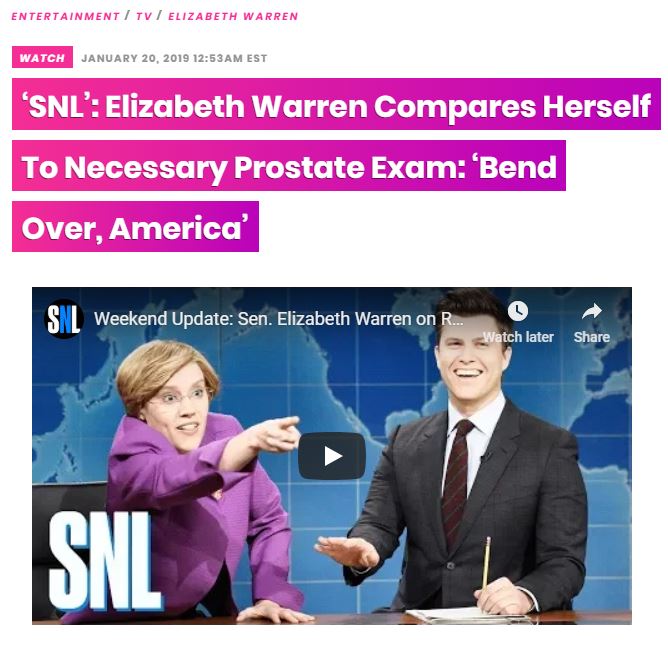 Prostate Exam? Not exactly the narrative an *unlikable* politician wants. But it worked because there’s more than a kernel of truth in the caricature.

“Am I likable? Prob not. But neither is a prostate exam. But you need one, or you’ll die. This country is long overdue for a finger up its caboose. You might even like it. So bend over America, and let Mama Warren get to work.”

In jest there sometimes is truth.

Will America vote for a prostate exam for president?

Since there’s no other place to put this…

No, America won’t vote for Warren.

Also sounds like the word is out amongst the narrative setters that Warren is not the chosen one. Warren is running against the Queen-makers in her own party now.

Ask Bernie how that worked out – and he only had to compete against Hillary.

So I guess SNL wants to knock her out of the ring. Are they going to back Corey Booker?

Put a latex glove and some lube on that finger Fauxcahontas.

SNL hasn’t been funny for over a decade.

If news organizations stopped writing stories on them they would be off the air in less than a year.

She should practice giving obongo his prostate exam, and if he’s not available, maybe Moochelle would oblige.

I can see the bumper sticker: Fingers Up for Warren And a nice take-off graphic from the “I’m with her logo.”

Wow, SNL actually goofing on a LIBERAL DEMOCRAT?
I wonder when the MSM will start wondering if that’s appropriate.