As an unhappy employee notes: ““It’s a coffee shop. It’s not a coffee shop’s problem to solve the drug problem…” 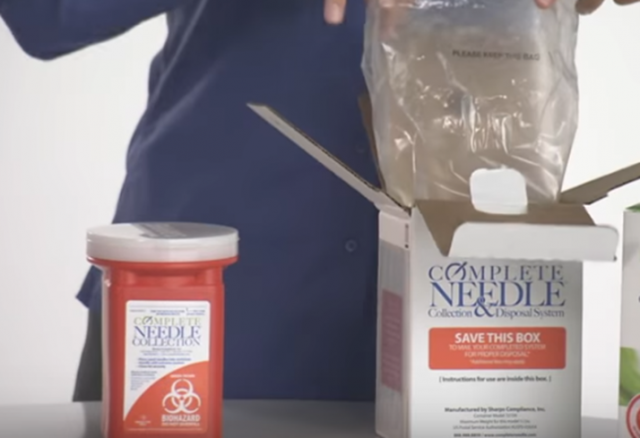 It has now been been 8 months since the famous purveyor of caffeinated confection, Starbucks, declared their bathrooms “open to the public” without the need to purchase their products.

The last time we reported on the caffeine giant, a New York Post team had investigated several Manhattan bathrooms and found that there wasn’t an open stall among the stores they visited. Many employees complained of blood, discarded syringes, and potentially infectious materials strewn throughout the toilets.

Sensible corporate leaders might reconsider the open-door policy, in light of the health risks to both employees and their customers.

However, this is Starbucks we are talking about. Its executives opted to add a new menu item: Needle-disposal boxes.

“These societal issues affect us all and can sometimes place our partners (employees) in scary situations, which is why we have protocols and resources in place to ensure our partners are out of harm’s way,” Starbucks representative Reggie Borges told Business Insider.

The problems revealed by the New York City report are not limited to that area. Complaints about the bathrooms are being generated across the country, by workers who are not comfortable in being directly identified.

As of Thursday, more than 3,700 people signed a petition on the site Coworker.org petitioning Starbucks to place Sharps Containers in “high-risk bathrooms.”

One Starbucks barista, who declined to have her name published out of fear for her employment, said she was jabbed with a needle last year. She has lobbied her bosses and the company to get medical waste containers.

The barista said several of her colleagues had also been jabbed.

“It’s a coffee shop. It’s not a coffee shop’s problem to solve the drug problem, it’s to protect the employees.”

There are real-world, business consequences to this choice. Employees who deal with these boxes will need to be regularly trained offered vaccination as part of safety compliance programs. These programs cost money and take away from work time.

Then, there is the disposal of the needle-boxes. Because it must be assumed the needles are coated with blood, they would be regulated medical waste. While requirements for disposal of such waste vary depending on the region, usually it is more expensive to discard the boxes, as they can’t be tossed out as common garbage. This, too, costs money.

If I were an investor in Starbucks, I would be worried about the focus on social justice instead of customer service and profits. Perhaps that is one reason the stock price has fallen recently.

Starbucks Inc. (SBUX – Get Report) fell 0.7% after Goldman Sachs cut its rating on the stock to “neutral,” citing concerns over the pace of growth in China, where the world’s biggest coffee chain has targeted a significant expansion.

Furthermore, a corporation’s virtue-signalling is also a signalling to competitors that it may be time to make a move on market share.

Chinese coffee start-up Luckin is aiming to open 2,500 new stores this year and overtake Starbucks as the largest coffee chain by number of outlets in the world’s second-biggest economy, it said on Thursday.

The firm, which only officially launched its business at the start of last year, has expanded at breakneck speed, propelled by a focus on technology, delivery, and heavy discounting even at the cost of mounting losses.

“What we want at the moment is scale and speed,” Luckin’s chief marketing officer, Yang Fei, told reporters on Thursday at a presentation in Beijing.

In conclusion, Starbucks’ corporate leaders would be better served if they signaled to both employees and customers that their health and safety is important.

@Starbucks you either want a business where I feel comfortable bringing my 13 year old son and 6 year old daughter… or you want a place where junkies can freely dispose of their needles. Choose wisely. Signed, #40somethingsixfigureearner

If you are going to do social justice, do it. Don’t be semi buttock about it.

So they could implement a sliding price menu. Or, just make payment voluntary. That would be a novel business model..
Pay if you want… or not… it’s all good coffee!!!

Full disclosure: I hate their coffee, I guess my palette is just too plebeian.

I like their coffee. I believe all coffee should be adulterated with sweets and fats and flavors. I don’t like being around used needles, spilled or smeared bodily fluids, or people who stink. I more particularly feel edgy around people who get into noisy arguments with entities I can’t see, when they don’t have a phone or earbud.

I can pay for my coffee, and I can easily find another vendor, anywhere.

Just wait until one of their employees gets something like hepatitis and gets sued. Then how will corporate speak to that? Why would anyone subject themselves to overpriced burnt coffee with a side of some blood born disease?

A real prick might complain to the city that the bathroom trash now contains human blood products thus requiring disposal as bio-hazard waste at a cost well above (5-10x) normal garbage. get woke, go broke.

And BTW, my local mochahut up the street and many others are thriving. Fourbux is no longer a place to take the kids on weekends. And since liberals lack the basic humility to admit that they made made a mistake, I can see a lot of brick and mortar closings in their future in progressive areas. Twenty years ago in PDX we joked that civilization ended 20 ft beyond the last Fourbux. And there was a time when the appearance of a new brick and mortar location foretold the coming gentrification of a neighborhood. But now it seems to be the opposite, and the local independents who are customer and not virtue focused will be the ones doing the displacement. Does this mean that capitalism is a more robust model even in whitetopia?

Having failed by voluntarily opening their stores to junkies, Starbucks solution will be to back legislation requiring all establishments to offer needle boxes and bathrooms to the truly great unwashed.

I’d go one further and say Starbucks should open their doors to all without requiring purchases when the temps outside drop below 32F.

I broke my addiction to their crap and I am much happier not giving them my money.

I guess it is a matter of context. I am seeing more and more places with medical waste disposal boxes. Roadside rest restrooms. Restrooms in truck stops. Other places. The subject didn’t come up until Starbucks did their SJW posturing.

I’ve seen them for some time. I presume insulin users use them also.

Someone is going to die in these “safe” injection sites. It might be an addict by overdose. It might be an employee or regular customer by a variety of unsavory methods. Regardless, how much liability are shareholders willing to assume over this? How much liability does the management team carry for this decision? I’m not a lawyer, but as a business owner I cringe.

After eight months without a death, the clock is running out, sadly.

You drink a venti Frappuccino everyday you’re going to get diabeetus. Good on them for helping their most loyal customers.

But, it is socially acceptable to get a frappachino every day, as opposed to say, a shake at Mickee-D’s. The gyrations that people go through to rationalize and deny dietary choices is, I am sure, a fascination field of study. This of course started back in the 60’s when TAB burst onto the scene and of course the inevitable portly teen with a bag of chips in one hand and a TAB in the other. If we can disguise one food choice by including it with another, then we have succeeded. So lets start with that cup of coffee at 5 calories, and then keep adding syrups and flavors and creams until we are at 500 calories, but to the world, it is still just a cup of coffee.

Fourbux has just followed a trend put in place by 7-11 decades earlier with the slurpee machine. Kids from up-scale families were being discriminated against because they couldn’t get their yearly allowance of high-fructose corn syrup each day by going to the 7-11 (socially prohibited from visiting such places), and the powers to be at Fourbux realized this, so they introduced basically the same product at a significantly higher price, which then made it acceptable to the posh parents. If you look at a Fourbux menu these days, it is actually hard to find coffee on it. It is a giant matrix of fruits on one axis and nuts on the other to which pumpkin spice, salted caramel, and mango are liberally drizzled. Basically, it is just the most recent version of putting lipstick on a pig.

You now patronize a Starbucks and you risk being served food and beverages contaminated by intravenous drug users. Even greater risk if you work there.

The Starbucks CEO should be bent over, and his behind used as a pin cushion for every needle found in one of the stores.

Instead of those little plastic stir sticks, SB will now offer used needles….

Right, hopheads are going to line up to place their needles neatly in the official bucket.

What a conceptual breakthrough!

Next, large brick walls can be marked, so vandals will know which ones it’s OK to cover with spray paint. And cars can be labeled so criminals know which ones are approved for theft. The possibilities are endless. Those Starbucks guys are brilliant.

Denney’s coffee is better and cheaper – and you can get refills.

Does anyone remember how this whole thing started..?

A white female Mrg. in a Philly SB kicked out two young black guys who were sitting at a table but had refused to buy anything.

The young men said they were waiting for a friend, the Mrg. didn’t believe them so she called the cops. Once the cops arrived….out came the camera phones !!!

This led to a viral video, charges of racism/discrimination, protests and many testimonials from white libs…
“I’m a white guy and I’ve NEVER been thrown out of a Starbucks! In fact…I don’t even have an apt! I live at the Starbucks and the employees never ask me to buy shit..!!!”

Starbucks should have said: “Our inner city stores are a unique environment and we trust the on-site Mrgs judgment in these kind of situations.”
But since the SB upper management are a bunch of spineless corporate weenies they promised “sensitivity training” and the reassurance that…
“Everybody Can….Use Our Can!!!!”

Street people, druggies, and bums might not have much, but one thing they DO have is….SUPER HEARING…!!!!
Once they heard SB say, “Everybody Can”…the SB restrooms became a welcomed respite from everyday Bumdom…